I just came from an island beach walk where I was treated to two bald eagles flying overhead in perfect harmony — with a graceful ease and swooping formations.

This struck me as an apt comparison to Pacific Northwest Ballet’s end-of-the-season Encore one-off performance where they also feted some retirements from the PNB fold and especially highlighted the careers of two of its stellar dancers, Rachel Foster and Jonathan Porretta. These are the two eagles that I have in mind when thinking of graceful ease and harmony.

Before I get to them, I wanted to note two of the retirees who have been special to me, personally and professionally — “Rico” Chiarelli and Larae Hascall. Many years ago (1982) when the Chehalis Ballet Center started and had no ballet barres, I called PNB and Rico very generously and kindly told me how to build them, including the specs in detail, how and with what to sand them down and paint them (Brillo pads and Rustoleum), and what NOT to paint so we could take them apart as needed to take on tours for example, which we did. I’ve never forgotten this small kindness and the difference it made. 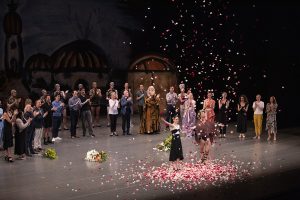 Rachel Foster and Jonathan Porretta,
with members of Pacific Northwest Ballet,
in their Farewell Performance curtain call
on June 9, 2019
Photo by Lindsay Thomas

Larae was so generous in passing along her extensive costume knowledge over the years too — such as how to dye ballet slippers and get the shade and tone of the color that you might actually want. She even agreed to sometimes dye items for us if they could batch them with their things. She also loaned out costumes and sold costumes no longer needed in the repertory (a trio of long skirts we made use of many times).

Thank you both so much. I knew too that the kindness that PNB has historically shown to colleagues and professional friends came from the top as Kent and Francia always took great care and thoughtfulness to welcome dance teachers and others. (I was thrilled one time, for example, when, at a pre-show talk, Francia gave a shout-out to my father whose birthday fell on that day.)

I now come to Foster and Porretta who also have poured out their hearts and careers on behalf of PNB. Each is imbued with outstanding technique and great souls as performers. No rote dancing ever.

The program began with the thrilling Polonaise (concluding section) from George Balanchine’s famous Theme and Variations, followed by Paul Gibson’s (a nod to his retiring as ballet master) The Piano Dance; then Foster with Jerome Tisserand in Nacho Duato’s Rassemblement; a welcome repeat of one of this season’s strongest premieres, Bacchus by Matthew Neenan; Foster with Seth Orza in After the Rain pas de deux with choreography by Christopher Wheeldon (I think there’s an unwritten rule that retiring ballerinas do this duet, as did Carla Körbes a few years ago); Foster concluded her PNB performing career with the complete rendition of the group work by Alejandro Cerrudo, Silent Ghost; a delightful pictorial tribute to Foster and Porretta, accompanied by the PNB Orchestra playing the Galop from Coppélia; and finally the iconic and moving Balanchine take on the Biblical story of the Prodigal Son, with Porretta as the Prodigal, per his request.

Balanchine was brilliant in reversing how the end of the story plays out. The original has the father running to meet his son, whereas here the son traverses the stage on his knees (in meek penitence perhaps) and then crawls up his father to be embraced in his arms as he’s carried back to their home. This is SO moving that I’m getting all choked up just replaying it in my mind’s eye. Oh my. And how Porretta gave his all in each scene. Great drama, great dancing and a superb theatre experience. I’m so glad they did it. Peter Boal, to the cheers of the audience, announced from the stage that Mr. Porretta has joined the PNB School faculty, an opportunity to pass along all that he knows and loves.

I’m glad that Foster chose to dance in several things and apparently, as Boal told us, took on at least one dance that was new to her. I have always enjoyed her dancing — its clarity of thought and action.

Part of the fun of a gala/encore show is seeing how and who makes tributes and this one was no exception:  Founding Directors Kent Stowell and Francia Russell; Mr. Boal; Porretta’s mother Jane Littledeer; Foster’s daughter and husband; plus many current and former dancers.

This Encore was a first-class honor to first-class dancers and a superb evening at the ballet.