March 19, 2022, evening
Plot Points Program: Before I Was, Caught, Plot Point, The Times Are Racing

Many years ago I saw a ballet titled Love Songs at the QE Theatre in Vancouver, BC, and while very well performed, it was anything but about love. In fact, an older woman who was seated a couple of rows in front of me stood up at its conclusion and very loudly declaimed for all to hear, “I do NOT come to the ballet to see violence against women!” Wow, and good for her.

I preface my own thoughts on PNB’s latest program with this small story, as I’m sure and hope it was unintentional on the choreographer’s part (Robyn Mineko Williams), but her new Before I Was ballet included a scene of unwanted sexual intercourse — at least as how I saw it, with male and female (James Moore and Elizabeth Murphy), legs shaking and appearing as if he’s forcing himself upon her, with her seeming to act as if it was unwanted. If the choreographer wanted to depict a romantic attraction and attachment of this couple, I think this could and should be edited out and shown by some other means. Otherwise, it mars the rest of the work — at least for me.

Before I Was does have a kind premise — two children (danced/acted) by two PNB School students, Edith Stockton and Marcus Wei) who are shown as growing up together, with the original intent of having them become a couple as they mature into adulthood. I liked the set (Andrew Boyce) of a simple outline and suggestion of a house and the original music, accompanied by the mighty PNB Orchestra and with songs provided by the live vocals of the composers, Macie Stewart and Sima Cunningham, who appeared on stage.

From my view, Before I Was ended up being disturbing rather than what I believe was intended. 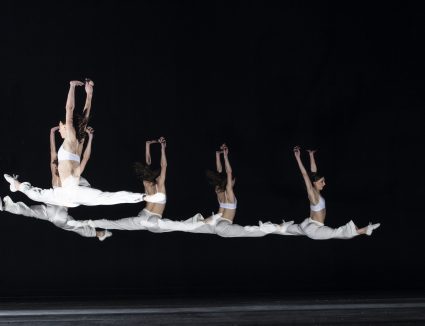 I always enjoy seeing Caught — either by PNB dancers or by choreographer David Parsons’ own company, Parsons Dance. It’s a clever concept and magical in its execution — the use of what I’m assuming to be a clicker by the solo dancer (Melisa Guilliams) and strobe lighting to create the effect of literally dancing across the air, floating as it were. Except for brief “a terre” sections in between, the dance takes place entirely “en l’air” with Guilliams jumping, leaping, and traveling about, with her dancing eliciting cheers and deserved applause from the audience who ate it up. It concluded with the dancer apparently dropping out of the sky to the stage. Parsons is a very good modern dance/contemporary creative soul and it would be fun to perhaps have additional works of his active in the PNB canon.

Crystal Pite wrote extensive and interesting program notes about her piece, Plot Point and, in a sense, wrote my review for me (thank you). This was my third and welcome viewing of it, and it was fun to see it this time again, knowing what to expect and to try to see it more deeply, as there is a lot of action happening. Pite’s humor shows in the cinematic-like opening where she quickly summarizes all three acts in rapid fashion — something like “all you need to know in five minutes or less” (I think it may have been more like three, but I wasn’t consulting my timepiece.) 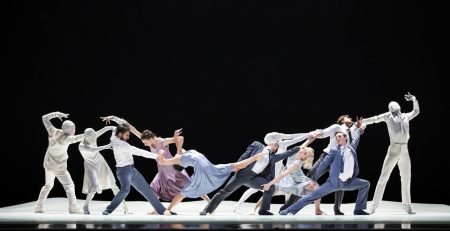 Accompanied by the PNB Orchestra, Pite uses the Bernard Herrmann score made for Alfred Hitchcock’s “Psycho” — yes, including the screechy sounds that depicted its infamous shower scene with Janet Leigh. The dancers are often, but not always, completely covered (faces too) in gauze when in a “replica” or “shadow” mode.

This time, I found that her ballet follows what’s called a storyboard, rather than straight-forward narrative — of deception, revenge, thugs-for-hire, and murder. It really doesn’t end happily for anyone, except for one character who seems to have “gotten away with it.” 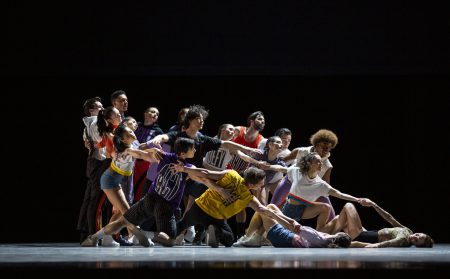 Justin Peck’s dances and choreography always give us a good time — he understands composition and always seems to come up with fresh ideas. His The Times Are Racing has the dancers all wearing sneakers/athletic wear and he begins his dance with the cast in a cluster, alternating encircling a sole dancer…and the piece grows and develops from there. The Times Are Racing is a large group work that’s energetic, overtly athletic and filled with just plain, good ol’-fashioned dancing.

There was a strong conclusion to the mixed-bill program that ranged from the creepy and murderous to insanely happy. PNB has weathered the Pandemic storm, had a few bruises like so many along the way, and has gratefully returned to live in-person performances (and smartly still offering digital/streaming options). The company is stronger than ever and poised for continued greatness. It provides art in a time — politically and otherwise, where we all need it, now more than ever.