While it may have technically been a season encore offering, Pacific Northwest Ballet’s broadcast of its summary program and tribute to departing dancers felt, at least to me, as if it were its own, separate program. Perhaps it’s due to the fact that this has been a digital season (no in-person showings) or that I feel like we’re coming back to something more closely resembling normal — or at least the new abnormal.

A note on the tributes to the departing dancer artists — having just come off of a recital where I personally felt like I barely got to know four high school graduates at one of the ballet studios where I’m newly employed this year, it’s perhaps even harder to say “goodbye” and “thank you” to dancers that I’ve enjoyed on stage for their entire PNB careers. It seems like you just get to know them and then, poof, off they go.

The broadcast was kicked off with a welcome by PNB’s Artistic Director, Peter Boal, who briefly summarized the past COVID-19 year and how PNB was able to be nimble and re-tool itself as much as possible to accommodate and adapt to these trying times. He happily reported that they now have subscribers from all 50 states and from an impressive 36 countries. Hard to imagine pre-all digital season. 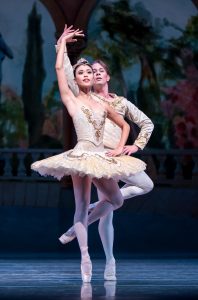 Leading the bill was Happening, which was a fun “happening” in the ’60s sense of the word. Really a film with dance, it was both on the playful and silly side that led and drew us into its magic, utilizing the open spaces in and around PNB’s Seattle Center home and Seattle area environs, such as parks, paths, in front of the Asian Art Museum. The dance is one of those “relay-race” types of efforts, where the dancers all learn the choreography but in performance/filming, it is passed along from one to the other. The clips were very cleverly edited — sometimes the dancers were soloing, sometimes they were in a group “view.” Choreography and direction were by Leah Terada and Miles Pertl, and it was danced by Angelica Generosa, Clara Ruf Maldonado, Angeli Kiana Mamon-Urrea, Noelani Pantastico, Lesley Rausch, Dammiel Cruz, Mark Cuddihee, Christopher D’Ariano, James Moore, and Dylan Wald.

Departing dancer Stephen Loch was represented in two Swan Lake excerpts — in a solo (Ratmansky version) and in the Act III Coda version of Kent Stowell with Generosa providing the Black Swan zing and 32 fouettées (double turns throughout, OMG). He is a super, elegant dancer, and Miami City Ballet is lucky to have him soon to join their ranks.

for you was a piece d’occasion made for Leah Merchant by her colleague Christopher D’Ariano. My favorite part was showing her dancing on one of the Puget Sound beaches, in a flowing print dress — very Isadora Duncan and expressive.

Ezra Thomson unleashed the PNB Kraken men with his Salt of the Earth ballet, with music provided, literally, by the hands of its amazing cast:  Ryan Cardea, William Lin-Yee, Thomson, and Jerome Tisserand. Lin-Yee, who is departing, also played the piano. Filled to the brim with lots of what might be called male steps — jumps, turning jumps, beats, pirouettes, etc., it really was an unusual and creative showcase.

Who doesn’t love anything staged by former PNB Artistic Director Francia Russell? Balanchine’s La Valse (Ravel), accompanied by Christina Siemens, was a perfect tribute to Tisserand (departing for Ballet de Monte Carlo) in a duet with his frequent PNB ballerina partner, Lesley Rausch. Rausch was perfect in the part of the young ball attendee who gets seduced by death (Tisserand). If a ballet can be concurrently dark, foreboding, and lovely, this is it. 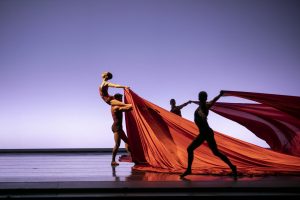 The Tisserands (Jerome and his wife Laura) were then featured in “their” pas de deux from Edwaard Liang’s new work for PNB, The Veil Between Worlds, set to music of the same title. It’s a lovely duet — lots of reaches and pulls, interspersed with a few lifts and turns, it concludes with him spinning her offstage, she is front of him, legs parallel and reaching out.

Concluding the Encore Program was an excerpt, filmed in 2015, from Stowell’s Swan Lake, Act IV’s duet where Prince Seigfried asks for forgiveness from Odette (the swan queen) for being such a dummy, having sworn his eternal love to an imposter at a party (happens all the time, right?). Here Laura Tisserand was soft, supple, and, yes, forgiving, even though their love is doomed.

This was an excellent broadcast/film that was as much an homage to PNB’s season and its patrons as much as it was a tribute to those to whom we say “farewell” and to what the future holds in store for PNB and ballet.

The show also came with some bonus content, and one was a delightful new ballet, Unprecedented Serenade, set on PNB School students by Dylan Wald, that used the music of Mozart and then a song, “Cut the World” by Antony and the Johnsons. This work had some nice visuals and surprises and clever use the PNB environs such as outside on the Center grounds, gardens, and even on the turf of the Seattle School District Memorial Stadium next door. Each of the 10 sections was different, yet united and the work’s Epilogue took us back to the studio for a very lyric pas de trois. Fairly new to the dance maker game, Wald already shows a keen level of compositional know-how, ingenuity, and brings a fresh eye to his dance.

With PNB apparently rebounding and coming through the tunnel on the other side, I can hardly wait to see what and how they will bring to both their announced in-person and digital-only seasons. We can be grateful.