Pacific Northwest Ballet’s “Locally Sourced” program I found to be strong and clever in concept and idea but not as strong in execution, choreographically-speaking. PNB tapped into regional talent for the choreographers — Eva Stone; Donald Byrd; and company member Miles Pertl — and the results were mixed. Overall, it was a light program, with Byrd’s middle-of-the-program work, Love and Loss, as the most serious in tone and texture, as suggested by its title.

I found it awesome that FOIL, the offering by Eva Stone, used music by female composers (I was excited to hear the music of Nadia Boulanger, Elisabeth Jacquet de la Guerre, Francesca Lebrun, Fanny Mendelssohn, and Clara Schumann), providing a lovely superstructure on which to pin the dances. As the choreography, concept and casting appeared to be female-centric, I might have ditched the men of the “Hold” and “Exhale” sections as unnecessary and really gone with the boldness of having an all-female work in every sense. Each of the five sections opened with one of the cast members verbally announcing its title to the audience and then that section’s dance would begin.

The first section, “Now,” looked as if it were the result of an improvisation exercise with the dancers, with them showing and repeating gestural motifs that they sometimes shared with others and sometimes not. Attractive and very pleasant pattern-wise, it looked like a swirl of color and bodies, a rainbow of yummy flavors mixed in rich vanilla ice cream.

While great composers and creators often borrow from themselves, I would have liked Stone to have challenged herself not to have borrowed from a work, as I recall, she made for her Stone Dance Collective and the wonderful Chop Shop Festival she founded — a trio of semi-nude female dancers, facing upstage away from the audience, in the section titled “Be Still.” This dance is about the expressiveness of the upper back and the arms, making lovely port de bras and connecting with each other, in the sense of community. Daring perhaps for PNB’s main stage audience, this section was danced by Leta Biasucci, Amanda Morgan, and Calista Ruat.

“Wait” was an extended solo for the amazing Angelica Generosa. This is one dancer who always exudes confidence, making you feel comfortable watching her execute the technical and artistic challenges thrown her way. Always a treat!

Love and Loss I would term a meditation on its theme. With “atmospheric” music by Emmanuel Witzthum, Byrd had the dancers frequently move in and out through upstage open door openings and use of the wings. Clocking in at 55 minutes, it’s not for the faint-hearted, yet I felt Byrd could have gone further (not in length!), but in showing more of a journey of one character, which I thought he was going to do with Lucien Postlewaite’s character of “Movement I” — taking this one character and having him appear/be the thread of each subsequent section, perhaps observing or commenting on the action — somewhat like Wagner’s Wotan. I think this would have deepened the ballet even more and would have provided more of a connection for the audience. I would have completely re-worked “Movement IV,” as it came across as being a bit incongruous with the rest of the piece, appearing like Byrd needed an ending and this was it. Love and Loss was a good opportunity for the dancers to show both their dancing and acting mettle. There was memorable dancing by all of its large cast, including Postlewaite, Leta Biasucci, Dylan Wald and Cecilia Illiesiu, and Dammiel Cruz and Madison Rayn Abeo.

For a dance about Seattle and environs, look no further than Pertl’s Wash of Gray, with sections subtitled “Pioneer Square,” “Puget Sound,” “Seattle Underground,” “Olympic Mountains,” “Swainson’s Thrush,” (a type of bird, not a locale) and “Seattle Waterfront.” Pertl collaborated with his scenic designing sister Sydney and Maxfield Woodring and Eli Lara to create an ever-moving, drawn in real time backdrop, set at a V-angle, between which the dancers entered and exited. 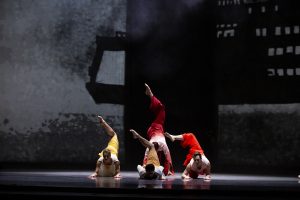 This ballet was interesting, challenged by the premise of the material itself (how do you represent place and place names in movement?). Pertl’s solutions were 100 percent danced by its committed cast. How fun to have Noelani Pantastico and Price Suddarth represent the Olympic Mountains, for example, or Sarah Pasch as a thrush?! The audience loved the sights, sounds including a ferry sounding its horn, and the pleasantness of the choreography, accompanied by the PNB Orchestra playing a score by Jherek Bischoff.

I find coincidences fun, and it was interesting to note that all three works had the same shoulder lift/shape in them. This happens more often than not in the creative process. I remember once going to a dance festival where each group were to present a unique item, yet 5 out of the 6 showed dances made to vocal music.

Anyway, “Locally Sourced” was an excellent effort by PNB to use (and not import) talent within arm’s reach. Too often festivals and programs with “Seattle” attached to their names rely too much on imported (meaning out of the area) artists and forget or neglect to look to the pile of amazing talent already here, who would be thrilled to be included in the bounty. Bravo!