The great music satirist Anna Russell used to kid about consulting old Druids for historic musical sources. An old Druid once told me where magic exists on Seattle’s Eastside suburban neighborhood, and I saw magic happen on stage this past Saturday night when Pacific Northwest Ballet showed its Jessica Lang work, Her Door to the Sky. 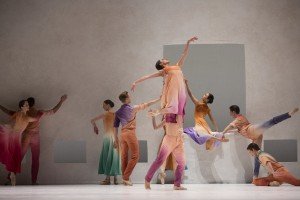 I found this work to be beautiful and loved the imagery, texture, and atmosphere it evoked. Inspired by the artwork of Georgia O’Keeffe, specifically her Patio Door series made between 1946 and 1956. O’Keeffe herself was inspired by the magic and aura of the landscape around New Mexico’s Santa Fe region — its amazing colors, both somber and intense hues. These colors were expressed beautifully in the production values — set, lighting, costumes as well as the eloquence of the movement phrases Lang created for PNB’s dancers. Beyond steps, this ballet lifted us up and was lovely, sweet without being sentimental, clever in its use of the set as framing the dancers in several ways, and satisfying with its logical conclusion. Lyric but also quite robust is Lang’s use of the ballet vocabulary. I liked how she presented the genders in two, respective sections, bringing the whole together in a tableau for the final movement. Elizabeth Murphy literally had her talent framed and showcased, especially where Lang had her execute modern dance-like reaches, twists, and shapes, reminding of what I call Martha Graham “lite.” 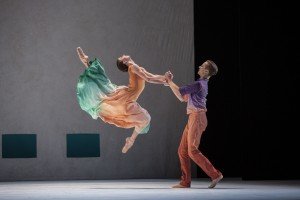 Set to Benjamin Britten’s Simple Symphony, I was at first put off by the distinctly English sound/timbre of the music but put that aside as the work progressed. Spanish inflected music would not have worked as well for something based on O’Keeffe’s work, as she was a hybrid herself. Britten’s and her work ended up pairing well, as both are astringent.

A sunny work that is a welcome addition to PNB’s repertory and one that I hope we get to enjoy again and again. 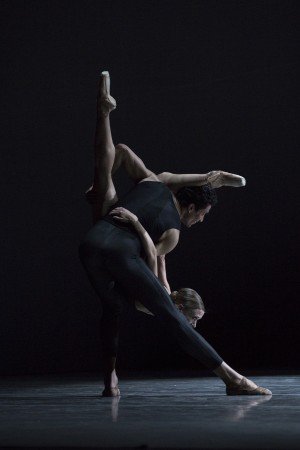 The middle work was New Suite a re-showing of a work made by William Forsythe originally for the Dresden Semperoper Ballet and premiered by PNB in 2015. A series of duets, it’s a light work in tone but meaty in substance and technical demands. Cheers greeted the dancers for their bows, and deservedly so.

Members of the mighty PNB Orchestra accompanied each work.

This year’s Director’s Choice was magical, sweet, and ultimately soul-filling and visually satisfying.