June 10 through 14, 2021
Streamed pre-recorded performances of Curious Kingdom, Pacopepepluto, The Veil Between Worlds 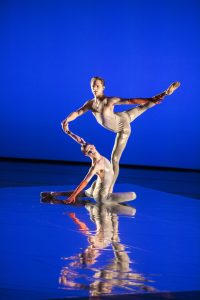 Pacific Northwest Ballet has been a leader among these groups, and their latest streaming venture of ballet, though modest in scale, was nevertheless mighty in its artistic scope and reach, one of which was light and playful. PNB is also smart in offering programs that are digestible — not too long but full of protein and visually yummy. As such, I really and truly enjoy — and appreciated, PNB’s Rep VI “Dance Happens Everywhere Digital Season” program, which was live-streamed June 10-14, 2021.

Leading off was new work for PNB by global dance-maker, Christopher Wheeldon. Wheeldon has carved out for himself an international choreographic career, and PNB has been fortunate to have had his creative services too. I find his work to be marked by clear, distinct uses of imagery, imagination, and form and he parses his work out in several shorter sections, as is the case with Curious Kingdom, set to the music of French composers Erik Satie, Maurice Ravel, and songs by torch singer Edith Piaf, with solo piano played by Christina Siemens. I like how the costumes’ use of the color red was a nice unifying theme that built up to the oversized bows used for Piaf’s (last) section.

The modest-sized cast was led by Elle Macy and Dylan Wald, with Leta Biasucci, Jerome Tisserand, and Lucien Postlewaite. 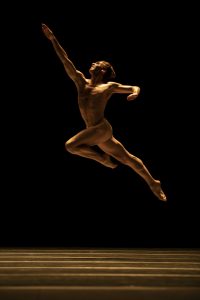 Alejandro Cerrudo has his own creative voice, and his trio for men is of the lighter genre. These three — Christoher D’Ariano, James Yoichi Moore, and Postlewaite, romp through some of the best of male dance vocabulary, dancing fully to songs sung by actor / crooner Dean Martin and Joe Scalissi. Pacopepepluto was staged by Pablo Pianto and is a fun delight, digitally released on November 20, 2020. Cerrudo is currently PNB’s first resident choreographer and the infusion of his voice helps give freshness to the genre.

Edwaard Liang’s work, The Veil Between Worlds, has a Western appeal, somewhat like how Balanchine tapped into how Americans tend to dance — with speed and big and bold. He also infuses much sense of poetry and I enjoyed how this played out, for example, in the duet for husband and wife Jerome and Laura Tisserand, who are not often paired. 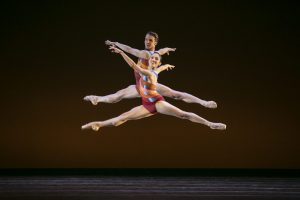 Laing’s work begins with a big sweep — use of a huge, billowing cloth, that reminded me of Doris Humphrey’s wonderful modern dance, Soaring. I’m glad that he uses it multiple times, as sometimes these visual wonders only appear once, as a hook, and then are not developed and deployed as a motif device throughout. For me, The Veil Between Worlds was the big work of the evening (so to speak). Set to new chamber music by Oliver Davis of the same title, played by members of the PNB Orchestra, it’s a lush work with no pretense, rich in visual imagery, and lovingly danced by its cast:  Biasucci, Angelica Generosa, Macy, Lesley Rausch, Laura Tisserand, Kyle Davis, Postlewaite, Ezra Thomson, Jerome Tisserand, and Wald.

As I mentioned, notable and lovely was the pas de deux made for and beautifully deployed by the Tisserands. I adored how it concluded with Tisserand lifting his wife while she is reaching her legs in a parallel, sixth position, extending to the front, and he spins with her offstage (off-camera). Lovely, lovely, lovely. Romantic and so tender and poetic. This couple will definitely be missed as they move their careers and family to France and the Ballet de Monte Carlo. How fortunate for la France!