The full moon was out the night I attended Pacific Northwest Ballet’s glorious production of George Balanchine’s 1962 ballet, A Midsummer Night’s Dream — with PNB’s new production of sets/costumes dating from 1997 — refreshing it.

Probably few in the area know where Milton is — but I do, coming within inches every time I pick up a subscription buddy who lives in Fife. And, there was the moon over the large MILTON sign that you can (if you know where to look) see from the I-5 freeway. It all seemed somehow marvelously appropriate and wonderful for a story ballet that takes place in moonlight. 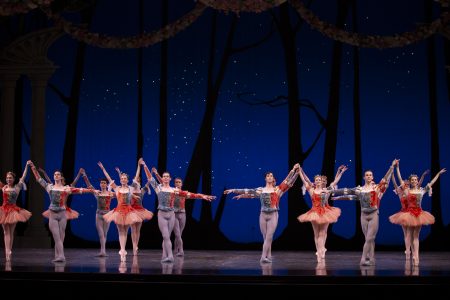 While related by the story, MSND is really two ballets — each act distinctly different from the other. The first condenses the Shakespeare story neatly and clearly and the second is all about celebration and exuberance — lush, rich, and abundantly full of superb dancing and equally superb choreography.

Our cast included principal Lesley Rausch as Titania with her Oberon Kyle Davis and Ezra Thomson as the puckish Puck. There is a story of besotted young lovers and mix-ups and fix-ups. Puck is a great role, combining dancing, acting, and miming into one part, and it requires a fearless dancer whose technique is solid but in service to the delightful arc of the narrative. Thomson was all that and more, providing the glue that pulls the story together and then sweetly wraps it up at the end of Act II, when he and the butterflies pose, and he’s lifted up above the stage, using a spider’s web. Real theatre magic!

Speaking of fearless dancing, I wanted to give a shout-out to end-of-the-season retiring dancer Rachel Foster whose fierce technique always combines with an intelligence to her interpretations, as here diving into the role of Hermia with good comedic timing. It’s always been and continues to be a pleasure watching and enjoying this artist.

Benjamin Griffiths and William Lin-Yee were paired off as the dueling competitors for the hand(s) of their betrothed. I also have to mention the “girl fight” scene between Foster and Lindsi Dec — all in total, a riot. Then I must mention as well how right it was that after Oberon (Davis) orders Puck to clean up and restore the right pairings, how order is nicely returned to the world.

Everyone loves the scene where Titania, through flower magic, falls in love with Bottom (Guillaume Basso) — the visual gags and how she gets him to follow her by offering him feed treats. Some of Titania’s best dancing happens early on with her Cavalier, Dylan Wald. (Titania and Oberon, while Queen and King of their respective courts and their single realm, never actually dance together.) Cute as a bug was the page that Oberon and Titania have their power struggle over, Pei Tung Tsai.

I always look forward to seeing the entrance of Hippolyta, Queen of the Amazons and her hounds, a role I believe originated by powerhouse Gloria Govrin and here replicated by another powerhouse, Cecilia Iliesiu, whose fouetté and attitude turns were spot on and her saut de chat leaps huge and impressive as Hippolyta releases her powers. So exciting and fun!

Skipping to Act II, it begins and ends big but before it concludes the audience is treated to one of the most glorious duets on the choreographic planet, the so-called “Divertissement” Pas de deux. The audience was given the gift of two of PNB’s fan-club favorites, Noelani Pantastico and Seth Orza. This pas has it all — a visually rich and interesting opening, a slow controlled adage — that finishes in a divine fall-into-his arms pose (sigh), solos for each and and lively integration into the whole, large-scale cast. Both dancers are, as the saying goes, at the height of their powers, and what a treat to enjoy their dancing. Pantastico looks great and appeared to be thoroughly enjoying herself, and Orza’s strong male dancing is a factor you can always count on.

As I said, it ends big. This is a ballet that requires the numbers and the rigorous training and experience that only an established company like PNB can provide. I was sorry that it was over and would have liked to have indulged in an immediate repeat of Act II especially (who cares if it did exhaust the dancers!). A Midsummer Night’s Dream is a ballet that truly can be enjoyed again and again (hint-hint).

Now back to Milton…