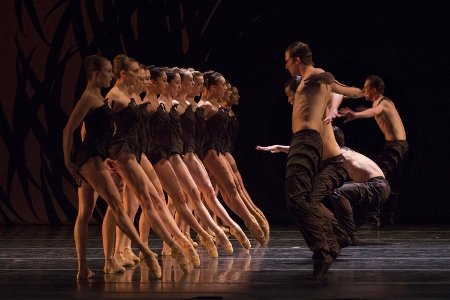 For its third visit to New York in as many years, PNB returned to City Center last week bringing with it two programs: one, as was the case three years ago, an evening of Balanchine; the other a mixed bill of contemporary ballets. While the all-Balanchine program once again showed that the PNB dancers can handle the Balanchine repertory reasonably well, the contemporary program, and particularly the closing piece on that program, Crystal Pite’s Emergence, demonstrated how fine a group of dancers they are.

Created in 2009 on commission from the National Ballet of Canada, Emergence is a strange, but profoundly audacious piece of ballet theater, generating images that remain seared in a viewer’s mind long after the performance ends – a rarity for a contemporary ballet. And even if it’s not a ‘great’ ballet, whatever that might mean, any dance that succeeds in evoking a visceral audience response akin to that of The Rite of Spring and that at various moments kindles memories of Jerome Robbins’s The Cage, Act II of Giselle, and depictions of The Borg from the Star Trek The Next Generation television series without being artistically indebted to any of them merits considerable intellectual respect.

On the basest of levels, Emergence is about an insectoid’s transition from birth to being a part of a functioning insectoid environment. But Emergence is considerably more complex than that. It depicts life in a community, whether it be a colony of ants, an avian aerie, a faceless corporation, or a ballet company – the last of which Pite writes was “the starting-off point” for the dance’s creation. And it depicts group culture, regimentation and conformity, as well as a measure of individual thinking, all wrapped in an exciting package of controlled frenzy. The stagecraft alone is quite remarkable: despite at times filling the stage with some 38 dancers, Emergence always looks vigorous, and never looks busy.

The ballet begins auspiciously, and brilliantly, as Rachel Foster gradually emerges from a cocoon-like womb under the watchful gaze of Joshua Grant. Foster’s struggle to engage her insect/human bones and break free is extraordinarily compelling: it’s a painful-looking birth made even more painful-looking by the inch-by-inch detail of Pite’s choreography. Grant then teaches Foster how to move like the insect-being she is – and they both thereafter scoot into the colony’s hive, or hill, or warren – through an entryway that passes through a marvelously ominous-looking set designed by Jay Gower Taylor, augmented by lighting (designed by Alan Brodie) that brings the colony starkly to life.

Space does not permit a blow-by-blow of the piece as a whole, but the highlights include powerful depictions of menacing collective species (‘tribal’) movement – first by the male insectoids, then the females – all wearing insect-like masks. (The fascinating costumes were designed by Linda Chow.) The masks eventually are discarded, yielding a pack of shirtless males and black leotard-clad females, with the females soon moving more like long-legged avian ballerinas than insects. From there, the action proceeds seamlessly to scenes of predator males attempting to ensnare (or, perhaps, mate) females and females repelling males. One of the most astonishing sequences is the creation of sleek vertical lines of ballerina cavalry, and one line in particular resolutely and mechanically forcing one errant male out of its way, perhaps to his death. It gave me the willies.

The piece is an extraordinary visual adventure, but it takes no positions, compels no conclusions, and doesn’t ‘go’ anywhere – it just ‘is’. But even though there’s no cosmic significance to it, what it ‘is’ is absolutely fabulous. And the PNB dancers’ execution was electrifying: every one of the dancers, whether featured or not, was on the mark and thoroughly in sync with each other and with Pite’s vision, as one would expect a non-hierarchical community to be. If Emergence emerges again, I would see it again in a heartbeat

The contemporary evening began with a sparkling presentation of A Million Kisses to My Skin, choreographed by English dancer/choreographer David Dawson as a commemoration of, and reflection on, the conclusion of his dancing career. It premiered with his company at the time, the Dutch National Ballet, in 2000. 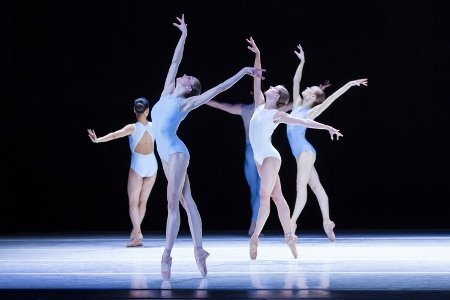 There’s nothing particularly extraordinary here, but for what this ballet attempts to do – to celebrate the joy of movement in the context of ballet vocabulary with a contemporary flair – it does very well. Movement is virtually non-stop and sufficiently varied as individuals, pairs and groups attired in sleek-looking costumes of white and various shades of blue leotards (tights for the men) designed by Yuriko Takeshima set the stage tingling, moving from highly animated classical ballet combinations to more contemporary swoops, off-center movement, and an overall-sense of exuberance that’s thrilling to wrap one’s eyes around. Lesley Rausch, Angelica Generosa, and Jerome Tisserand were particularly impressive, but all the dancers performed admirably.

William Forsythe’s The Vertiginous Thrill of Exactitude is one of his few pieces that is fairly regularly performed in the United States and consequently is reasonably familiar to New York ballet audiences. But it’s another example of Forsythe using classical ballet form to mock classical ballet rigidity and precision, from his use of garish-colored pancake tutus to overbaked posing and pointless combinations. It’s not one of my favorite pieces, although it was given a superlative performance by Generosa, Margaret Mullin, Elizabeth Murphy, Benjamin Griffiths, and Jonathan Poretta.

As evidenced by her performances in these two pieces, Generosa, still a member of PNB’s corps, impresses as a significantly distinctive dancer. I first noticed her during PNB’s visit to the Joyce Theater in October, 2014, and described her then as a particularly engaging dancer with a fine command of emotional nuance. She still is. She stands out – her phrasing alone distinguishes her from others. While other dancers are doing a fine job completing a particular combination, Generosa plays with it, stretches it, and makes it look different. And she takes chances, more often than not nailing them. Without in any way diminishing the capabilities of the other PNB dancers, her performances in these pieces were a particular delight.

Three years ago, when PNB brought a program of Balanchine ballets to the city in which Balanchine created most of them, and which are still in New York City Ballet’s active repertoire, I wrote that it was like bringing coals to Newcastle, and a gutsy invasion into NYCB territory. This second all-Balanchine program makes me see Artistic Director (and former NYCB principal dancer) Peter Boal’s scheduling motivations differently. This is less a challenge than an homage, and a demonstration that his PNB dancers can handle Balanchine’s choreography surprisingly well, even if not in a manner comparable to NYCB’s current roster of dancers.

While much of the difficulty I observed with certain performances might be attributable to understandable opening night jitters, the larger problem is that the stretch, admirable though it is, showed in a diminished comfort level.

Square Dance, which premiered in 1957, is Balanchine’s balletic translation of American folk-dance, pared to its essence. NYCB included it most recently in its 2015 winter season, and memories of those performances, including the dancers’ demeanor, capability, and comfort with Balanchine style, are still fresh; and although comparisons are inherently unfair, the PNB leads did not handle the piece as well. At Wednesday’s opening night performance, Leta Biasucci and Benjamin Griffiths, soloists who anchored the piece, wore pasted-on, unvaried smiles throughout, which exacerbated the forced look of the execution. Aside from that, Griffiths handled his assignment skillfully, but Biasucci had difficulty completing several turns without falling out of them. Also, somewhat surprisingly since it premiered there, the piece looked cramped on the City Center stage.

Prodigal Son, on the other hand, appeared more focused on the smaller stage. And the piece has been absent from NYCB’s active repertory for a three long years, making the PNB production particularly welcome. But these were the only advantages of this performance. The execution by Porretta and Rausch (replacing the injured dancer originally scheduled) never quite conveyed the detail and nuance that NYCB dancers bring to these roles, even though I’ve found more recent NYCB portrayals less compelling than those I saw years ago. Porretta, for example, first appeared after emerging from the family tent with a half-smile on his face – decidedly not how the prodigal son should appear. He proceeded to get into the role more appropriately as the dance progressed, and executed well, but, even with the facility he showed with the steps, until the piece’s closing scenes that that was all they were. Rausch excelled in every other piece in which she appeared during this engagement, delivering the outstanding execution I noted during PNB’s previous New York visit.  However, her Siren was not the vicious, heartless, and utterly irresistible force it needed to be. Rausch’s Siren was a kinder, gentler Siren – more human, but less commanding. Both performances were fine, just not at NYCB’s level.

The PNB dancers did quite well with the concluding piece on the program – Stravinsky Violin Concerto, with Rausch and Tisserand, and Noelani Pantastico and Seth Orza, dancing the distinctive ‘arias’. But I found it interesting that the only dancers who handled the intricacies of Balanchine hand positions (not a be all and end all, I’ll admit), were Orza, who was a NYCB soloist, and Generosa, who trained at the School of American Ballet. They dance Balanchine style instinctively, and it shows.

One final observation. This is PNB’s first New York season without its ‘star’ ballerina, Carla Korbes (another NYCB expatriate), who retired last year. Judged by these performances, the company appears to be handling the loss very well.