Kyle Davis pegged himself as a major new choreographic voice right from the get-go with his first piece, Sylvia Pas de Deux, made for PNB’s NEXT STAGE program. His 2018 world premiere, A Dark and Lonely Space, set to new orchestral and vocal music by Michael Giacchino, is excellent too and in this case, epic. 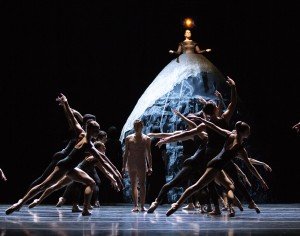 A soprano way up stage center (up, as in up high) whose character seemed to be that of an Erda, the Earth Goddess, invoked a kind of maelstrom of activity down on the planet, whereby earthlings came and went. She alternately entreated and compelled a lone male figure (Ezra Thomson) through what appeared to be a kind of birth, upbringing, and gifting him a female mate (newcomer to PNB, the amazing Clara Ruf Maldonado). It’s interesting to note in the cast listings that these roles are not gender-specific but are also performed female-female. This was definitely a showcase for the principal protagonist, and Thomson’s technique and artistic spirit were unbounded.

Davis builds the arc of the choreography very well, infusing the sense of the aural tones and rhythms into the solo, duo, and particularly effectively with the groups. The dancing really took off when the corps entered. Strong, strong, strong. The group I was with loved it with the only critical comment being that it was maybe about 10 minutes too long, having clocked in at about 50 minutes. 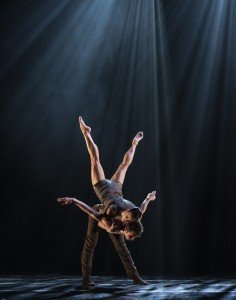 Choreographer Alejandro Cerrudo is one of the nicest, most earnest, sweetest dance makers around, and I found his Silent Ghost (to music by Dustin Hamman, King Creosote & Jon Hopkins, Olafur Arnalds, & Nils Frahm) a reflection of that personality. A gentle work for five couples (Noelani Pantastico, Elizabeth Murphy, Rachel Foster, Leah Merchant, Elle Macy and Lucien Postlewaite, Dylan Wald, Steven Loch, Ezra Thomson, plus James Moore), it flowed and ebbed, pairing well with the Spanish language I believe I heard in the music. The work was heart-felt and deeply personal. I found, though, that it suffered by placement in this program. In contrast with Davis’s work, the palette was too similar, and I believe Cerrudo’s ballet might have found a better niche on another program altogether. 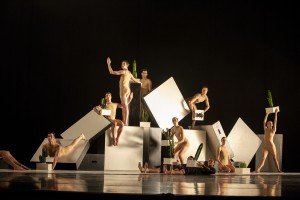 Cacti could be categorized as an absurdist piece, with choreographer Alexander Ekman thumbing his nose at standard convention. Set to music by Franz Josef Haydn, Ludwig van Beethoven, and Franz Schubert (with four musicians on stage, walking and playing sometimes through the action), it was at times amusing, funny, prurient, frustrating, and fun.

Kudos to the large ensemble cast of leads Sarah-Gabrielle Ryan and Christian Poppe, with Genevieve Waldorf, Elizabeth Murphy, Cecilia Iliesiu, Elle Macy, Amanda Morgan, Sarah Pasch, Leah Terada, and the male contingent of James Moore, Benjamin Griffiths, Lucien Postlewaite, Steven Loch, Christopher D’Ariano, Miles Pertl, and Ezra Thomson. These dancers were asked to do things (such as laughing out loud) that were out of box and quite challenging.

The mighty PNB Orchestra was led by Maestro Emil de Cou for Davis’s work (over 120 musicians performed in A Dark and Lonely Space, with 64 players in the pit, 60 singers in the side boxes, and one soprano onstage in a 12 foot-long skirt) and with Doug Fullingron conducting Cacti.

This was a fun and interesting program all around. Promoting and encouraging new work is vital to all the arts, in addition to curating the best of the past, upon which we build, continue to enjoy and love. I hope that all three works will be brought back in the future.