Pacific Northwest Ballet’s show this past weekend was the first in-person performance of Seattle’s major arts groups that I attended since the pandemic shut everything down 18 months ago. It was such a treat to be back seeing and supporting the PNB team, as well as the unexpected pleasure of saying “Hello!” to and chit-chatting with friends I had not seen since then either. What fun! 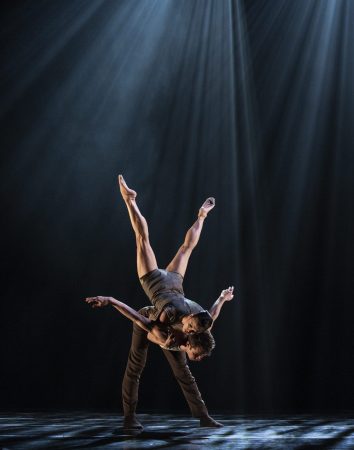 Artistic Director Peter Boal heartily welcomed the audience, giving us an outline of what to expect and some other good information (such as program casting inserts now being online only).

Alejandro Cerrudo, PNB’s first resident choreographer (if you don’t count Kent Stowell), was shown to great effect on this program. Silent Ghost was up first and it was last seen here in 2018. It’s a group work with two, central pas de deux couples — Lesley Rausch with Miles Pertl, and Noelani Pantastico with Lucien Postlewaite. Cerrudo likes to use, as one theme, undulations, and here this device is used in various ways. The use of ensemble was sharp and visually a standout, as the dancers were tight in their unity.

So the set could be changed, there was a long pause during which a six-minute film was shown with dancers expressing their joy at being back and also reflecting on how they got through the past few months. Loved this! 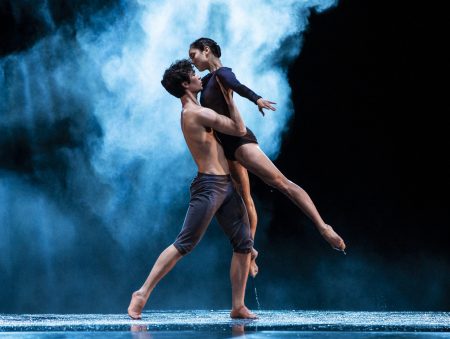 Excerpts from One Thousand Pieces followed, beginning with two downstage in-front-of-the-mid-curtain duets, each duet echoing the other, with their fluid moves. These duets danced by Yuki Takahashi and Luther DeMyer and Clara Ruf Maldonado with Jonathan Batista. The curtain then went up to reveal, what was to me, the biggest and most delightful surprise of the evening — three waterfalls of fog in the back and a stage of very shallow water in which the dancers didn’t so much as cavort as they did “regular” dancing but in the context of being on this slippery surface, using it to, yes, slide, spin, moderately splash, and tickle our visual senses. This featured Christopher D’Ariano, Elle Macy, Elizabeth Murphy, Leah Terada, and Dylan Wald.

While this work technically received its PNB premiere on March 13, 2020, this weekend was its first in-person showing, and it was new to me. Great dance and loads of dancing fun! 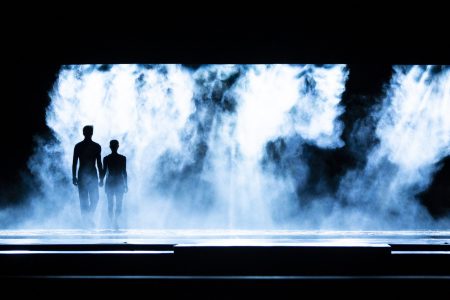 Little mortal jump was a return for this witty work (the opening dancer really does jump from the stage into the orchestra pit during his opening gambit) from five years ago — 2016 already. Imagine it, and it’s in this work — two dancers being “velcroed” to two vertical cubes, for example. The cast included Leta Biasucci, Kyle Davis, Angelica Generosa, Connor Horton, Emma Love Suddarth, Elle Macy, Christian Poppe, Kuu Sakuragi, Price Suddarth, and Dylan Wald.

A special shout-out to Emma Love Suddarth, whom I will very much miss from the stage, having announced her too-early retirement. As this was mentioned in the program, this alerted me to be especially mindful of following and watching her attentively throughout the evening. Emma, you are a special dancer, and thank you for your many, many contributions to the ballet stage over the years. 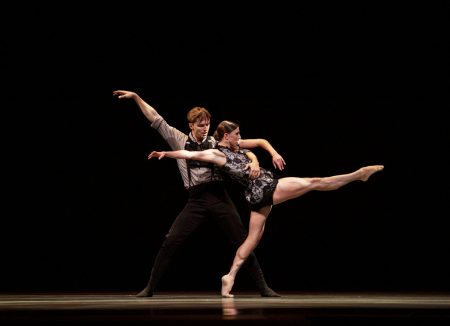 Well, you’re probably wondering why this review is titled the way it is. Kyle Davis, being from Wisconsin, deserves many kudos. While I’ve noticed him over the years, he really came to my attention during a Chop Shop solo performance that really had me thinking, “Wowza!” Everything he does is so clear, clean, sharply etched — he’s one of the ones to watch, for sure, taking up this mantle from retired (and missed) former PNB Principal, Benjamin Griffiths. We look forward to many more years of his involvement with local dance!

Live music, too! Both the second and concluding works used musicians in the pit: Page Smith, cello, and Christina Siemens, piano for the difficult Phillip Glass score (all Glass compositions, by definition are difficult) and a string quartet for the last of Smith, Michael Jinsoo Lim and Jennifer Caine Provine (violins), viola with Alexander Grimes.

I’d be remiss in not mentioning the loving tribute in the back of the program to James Raisbeck, PNB Trustee, who passed away at the end of August. James and his wife Sherry were and have been key to so much financial and joyful moral support of the arts in the Seattle area, not limited to PNB, Cornish College of the Arts, the Seattle Symphony, the Opera, and Raisbeck Aviation High School. One of my own, personal, fond memories is when we were sitting at the same table at a fundraiser for Cornish, and James started laughing and laughing at something that had tickled his funnybone and began pounding his hand on the shoulders of Francis (Timlin). The world is made better through such kind people.

It was so marvelous attending the first back to McCaw Hall ballet show for so many reasons, not the least of which was the fantastic and committed dancing that PNB brought to the stage (you could tell they were thrilled, too), the fine contemporary choreography of Cerrudo, the music, and well, really, the whole package.

PNB continues its repertory season this Fall, for subscribers only, vaccinated and masked socially-distanced audience. I, for one, am looking forward to more.