Pacific Northwest Ballet’s production of George Balanchine’s “The Nutcracker” is unique in that its values — sets and costumes (by Ian Falconer) and film projections — are only to be seen here. It is cheery, bright, colorful and chock-a-block filled with superb dancing by its Company and School dancers. Look for the at least three “appearances” by Mr. B himself. The film projections serve both to introduce the setting and story of the ballet and also as a bridge between the Party Scene and Clara looking for her nutcracker doll…and her mother seeking her. One little boy behind me got it right, listening to the solo violin music, “That’s so sad.” The music is indeed melancholic.

Artistic Director Peter Boal gave us an A-game Opening Night cast with the radiant Leta Biasucci as the iconic Sugar Plum Fairy, Her Cavalier danced to perfection by Benjamin Griffiths, and Elizabeth Murphy taking the honors as a dazzling Dewdrop. 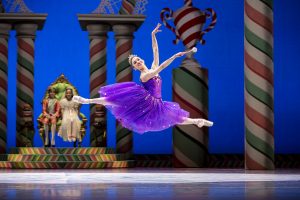 Miles Pertl and Leah Merchant made an effective and engaged Dr. and Mrs. Stahlbaum, the hosts of the Christmas Party. I never would have known Grandpa was played by Kyle Davis, being so submerged in his role (hunched over and beneath makeup) who then exploded with brilliant technique and bravura later in Act II as the lead Candy Cane, aka, the Russian Dance. Herr Drosselmeier as danced by William Lin-Yee was both magical and tender in his dealings with the party guests and with the tragedy of Clara’s nutcracker, given to her by himself, when it was “damaged” by her annoying little brother, Fritz (Adam Adbi). Dolls were crisply danced by Calista Ruat and Madison Rayn Abeo and the Toy Soldier by Price Suddarth. 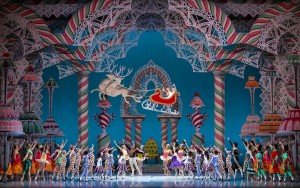 As in most Nutcracker versions, Act II gives us the “real” dancing: Angels; followed by the Sugar Plum’s solo (placed in this order, and not where it’s often later found in the Pas de Deux). Biasucci is a strong and fearless dancer, and because of this is able to fully realize and phrase the many technical challenges of the choreography, making them seem effortless. Margaret Mullin and Joshua Grant led the zippy Hot Chocolate (aka, Spanish dance). Coffee (Arabian) was cleanly danced by Principal Dancer Noelani Pantastico — always a treat! As I mentioned, Davis led the small platoon of hoop dancers for Candy Cane. One of my favorite small masterpiece delights always is viewing the Marzipan Shepherdesses with their intricate pointework, echappées, passe-pieds, hops on pointe, and for the lead, gargouillades and turning hops on a single pointe WITH dévelopées at the SAME time. Yikes. Totally fun and super exciting and impressive.

Mr. B’s Mother Ginger in this production, while probably costumed better than any anywhere (designed like a French Circus tent and enormous) is also way toned down and not given much to do, except to smile and wave and release the young Polichinelles within/under her skirt. Dammiel Cruz gave it his best.

The Waltz of the Flowers is among some of the best of Mr. B’s choreography — he well knows how to move large numbers in ever-interesting patterns and shapes, using compositional tools such as canon, repetition, transference (having one group do a motif then another echo it or copy it but perhaps in an altered way). Lovely. And the Dewdrop (Murphy) juxtaposed against this backdrop truly is glorious.

Well, we wait all evening for the Grand Pas de deux and when it finally arrives, Biasucci and Griffiths more than deliver. The turning balances (promenades in arabesque with use of the hands and arms only for the partnering) at the end of the adagio section are thrilling. This then moves into the Coda (dispensing with the Cavalier’s traditional solo and having put the Sugar Plum’s at the beginning of the act) and to the tutti finale. All wave good-bye to the “Little Prince and Princess” as they fly off in a sleigh, guided by reindeer. The End.