Give different cultures the exact same culinary ingredients and they each come up with something different and equally yummy.

Pacific Northwest Ballet’s concluding season repertory program proved just this to be the case with its Pictures At An Exhibition array of three one-act ballets: Balanchine’s La Source, Robbins’ Opus 19/The Dreamer and Ratmansky’s ballet from which the title of the bill is derived. All three were PNB Company premieres, although it’s noted that Peter Boal staged La Source in 2009 for its School Performance.

Music by French composer Délibes (Coppélia, Sylvia) tends toward the light “croissant” — tuneful and effervescent and Balanchine’s 1968 bon-bon made for Violette Verdy and John Prinz reflects that in its conception and choreography. Yet make no mistake — this is a virtuoso ballet filled with hard, hard technical steps and sequences and partnering, but made to look easy and fun (which it is). Noelani Pantastico and partner Kyle Davis, with Elle Macy sailed through their assignments with aplomb and cheerful grace. This is a ballet where you cannot be just one type of dancer — a balancer or a turner or an adagio dancer; you have to do all three. There are partnered promenades in arabesque or second position that change arms but not direction, tons of turns, and lifts, balances, small allegro and also moving big. The moving big solo went to Macy who does sissonnes into attitude back where she practically touched and knocked her own head silly with her extended back toe, enormous pas de chat and variations thereof.

Davis displayed virtuoso male dancing…and received much-deserved applause for his coupé jeté, attentive partnering, and petite allegro. His assignments also included quick and unusual changes of weight and technical demands not for the faint-of-heart. Similar in build to Boal (line, easy extension, focus), it was easy to see why he was cast, and I look forward to seeing him in prominent roles more often. 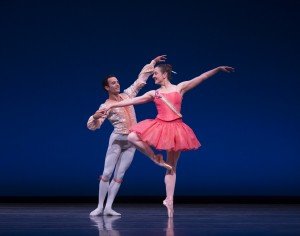 Oh, how I wish I had been able to follow through with Jerome Robbins’ invitation to interview him someday — this was to have been part of my research into the life and career of Seattle-born Graham and Robbins dancer Nelle Fisher. It would have been fascinating and perhaps a bit intimidating, but I would have enjoyed getting to know the mind and thoughts of this great choreographic genius.

I had never seen his Opus 19/The Dreamer made in 1979 and tapped by PNB’s Artistic Director Peter Boal for his own dancing retirement piece. From the double lift and hold of the central man’s arms to his right side, Benjamin Griffiths evoked the spirit and times of someone dreaming. These dreams ranged from the simple sunrise/sunset beautiful landscape kind to troubling nightmares, with the corps de ballet swirling in chainé turns, their arms slapping at space.

Rachel Foster, appearing in a light tone of purple, seemed to be his character’s romantic interest and distraction. She floated in and out of his radar and consciousness, sometimes melding with the corps de ballet and sometimes inserting herself within his vision independently.

This is a ballet to Prokofiev’s first violin concerto, which is equally mysterious and high-powered. Kudos to soloist Michael Jinsoo-Lim.

Alexei Ratmansky’s Pictures At An Exhibition was reason enough for me to want to resubscribe when it was announced at the end of last season for this one. I’ve always wanted to make a ballet to this Mussorgsky music myself and was eager to see how one of today’s hottest ballet properties would treat the music and theme, having heard about the premiere of this ballet for New York City Ballet in 2014. I loved it! 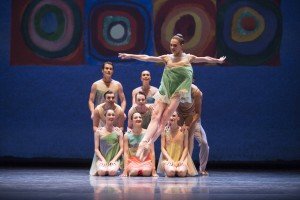 The use of Kandinsky’s 1913 Color Study as the projected backdrop was inspired for the vibrancy. Also, even today, the artworks come across as contemporary and not at all as dusty museum canvases. I liked how he used the entire cast for the Promenade or bridge that connected each of the short 16 movements, as the composer had imagined patrons walking through a gallery, looking at his friend’s paintings.

I’ve always loved the charm of the “Ballet of the Unhatched Chicks” and thought it was very creative and fun to make this an all-male section — with them preening, pecking, and competitively dancing and making a visual fuss, as chicks are wont to do.

Baba Yaga, the witch who lives in a hut that’s on top of chicken legs, appears in folklore, and I liked how Ratmansky uses two couples to dance to this strange variation.

The ballet concludes with “The Great Gate of Kiev,” and the majesty of the music was shown in how the cast of only 10 made for a big ballet.

I came away from this program elated and singing the praises of smart programming, smart dancing and smart choreography expressed in high art. Thank you, PNB!