This is a review 25 years in the making — which is how long Noelani Pantastico has been dancing professionally since first joining Pacific Northwest Ballet as an apprentice in 1997 — and about the length of time that she’s been picked up by my ballet radar.

I recall sitting in the balcony of PNB’s Studio C, watching her and Jonathan Poretta — both plucked out of the corps — rehearse the “Bluebird Pas de deux” (from The Sleeping Beauty) and being intrigued and impressed by this pair. (Poretta was, for my money, one of the best Bluebirds, ever.)

Another fond memory is sitting in the Richland, Washington high school auditorium (for a Regional Dance America Festival) and watching Pantastico dance a superb “Rose Adagio” (yes, with all four cavaliers, a couple of whom were culled from the Festival faculty). In talking with her and praising her performance following, she said that this pas “…made her feel like a ballerina.” For many, like me, this pas is an apex of classical dancing, simply one of the best and one of the highlights of this Festival showcase. 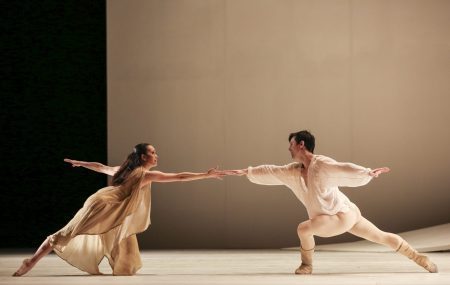 Which brings us back to the present and PNB’s presentation of Jean-Christophe Maillot’s Romeo et Juliette. While I have to publicly admit I was not all that smitten with it when it premiered here in 2008, being used to the Sir Kenneth MacMillan and Rudi van Dantzig (my personal favorite) versions, it’s grown on me over time and I have come to appreciate its detail, re-imagined reality (no swords, knifes, or potion bottles on display here), and its raw essence of emotions and power battles, not to mention the opportunities for some great dramatic dancing. Maillot handles the fight scenes through the use of slow motion, which is visually arresting and allows us to focus on the various bits happening around the stage.

Maillot presents the story through the eyes of Friar Laurence (Miles Pertl) in what appear to be a series of flashbacks, continuous regrets, even the use of him as “Greek Chorus.” Friar Laurence comments on the action, trying to prevent it, but unable to do so, Maillot nearly makes the ballet more about this character than the celebrated leads for whom the ballet is named. Pertl is superb in this role. Very well cast!

Pantastico, as Juliette, and James Yoichi Moore, as Romeo, are and were powerhouses — in fact the entire company was “on” and in the moment. A real find is new company member, soloist Jonathan Batista, whose turn as Tybalt was very strong and memorable; his clean technique and power are etched into my memory. As the Nurse, Leta Biasucci got her opportunity to show and exercise her comedic chops — to superb effect. As friends of Romeo, Ezra Thomson (Mercutio) and Christian Poppe (Benvolio) were equally strong, although as a character, Mercutio was certainly more menacing and prone to instigating the agitation that lead to both his and Tybalt deaths. 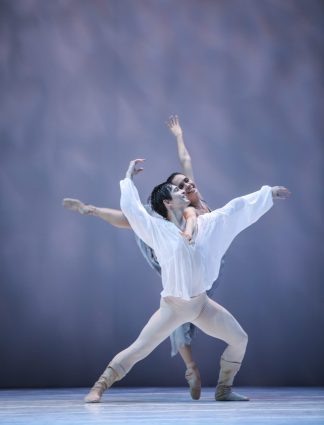 In this version, it’s hinted that Lady Capulet has a “thing” for Paris (Joshua Grant) and Cecilia Iliesiu plays her with the complexity this role demands.

Like so many, I will greatly miss Pantastico from the stage and am so grateful she’s spent the last few years of her performing career right here in my backyard, and what I think of as her home company, PNB. Her next career step is to pass along nuggets to aspiring young dancers at Central Pennsylvania Youth Ballet (where she herself trained prior to PNB). Her last actual show is Sunday, 13 February’s matinee. I’m sure there will be a clamor for tickets and I trust everyone there will cheer, honor, and fete this beautiful, kind, generous person and her glorious career.