They say that all ballets should be called Swan Lake. By this it’s meant that due to the name recognition, you practically have to beat people away from the box office with a broom. The show we attended was sold out with a long line of folks vying to get in well before the box office even opened. This was doubtless due in part to PR hype, but also due in part to reality. Swan Lake really is not only a good show, it’s great art if done well, and I’m thrilled to report that PNB’s current edition of Kent Stowell’s production and this performance outing were superb. 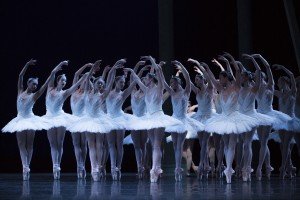 I believe when PNB’s Swan Lake premiered in 1981, it was only the second ballet company, after American Ballet Theater, to have produced the entire four acts in North America. No small feat!

With the current Ming Cho Lee sets and Paul Tazewell costumes, plus lighting designed by Randall G. Chiarelli, you have an A-team production. And with the casting of Noelani Pantastico and Seth Orza as the tragic love pair, supported by PNB’s amazing and technically top-notch dancers, what more could you ask for? 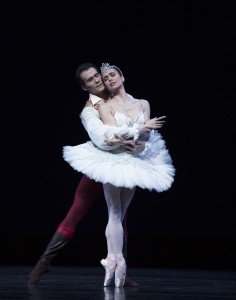 Price Suddarth brought zesty appeal to the role of the Jester, with smart humor and control throughout his turns and temps de fleche. Margaret Mullin as the Queen Mother was clear and authoritative in her intentions for her yet unmarried prince of a son, Siegfried, and William Lin-Yee brought a large menacing presence to the important but somewhat thankless role of the evil sorcerer, von Rothbart (he gets booed and hissed during the curtain call bows).

Kyle Davis brought his fine-tuned sense of line and presentation to the pas de trois with bright dancing by his two partners, Angelica Generosa and Madison Taylor. The women’s two solo variations are particularly fun, and this dance adds a cheerful contrast to the unfolding dramatic story. Ezra Thomson brought pathos to the role of Siegfried’s spirits-loving tutor, Wolfgang. 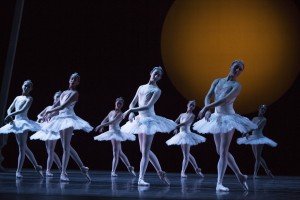 The Act II corps of swans were tight, uniform, and moving as one body. While this may appear easy, it’s not, as it takes not only oodles of rehearsal but consistent training in a uniform style. This PNB provides. Notable were the “big” swans, Leah Merchant and Emma Love Suddarth, the zippy and iconic “four little” swans of Madison Rayn Abeo, Leta Biasucci, Angelica Generosa, and Carli Samuelson. These four swans always bring down the house.

The Act II pas de deux and that of Odile in Act III could not have had a better change of characterization — from supple and tender to sharp and seductive. Pantastico really brought the nuances to each role, and she was great to see and enjoy. 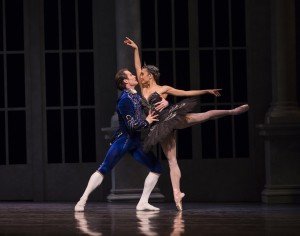 For those who really want to know — Pantastico did all 32 fouettes, beginning with a double pirouette from fourth position. She was wise in keeping to singles. Too often, those who toss in multiples get off the music.  What makes this moment exciting is not only the total number of revolutions but meshing these with the music. Brava!

When first unveiled I wasn’t sure that I liked Stowell’s Act IV, but it’s really grown on me and now I think it’s probably about the best one out there, with its clarity of dramatic intent and action. The 24 swans are peeled away to expose a sad but forgiving Odette, their ultimate separation and Siegfried’s concluding fall to the floor in remorse.

Such is the stuff of which legends are made. I hope that all shows have the “problem” of turning away customers with sold out houses and that this popularity translates into expanded audiences coming to enjoy PNB’s future engaging shows.