We were unsure of what to expect going in to view Jean-Christophe Maillot’s production of the Cinderella tale, but by the time we got to the intermission following Act I, we collectively said amongst ourselves, “Not too bad!” And then when we came out after the curtain rang down, this time we collectively said, “Well, really pretty good!” You have to understand that some of my coffee-klatch are not big fans of Maillot’s work and one even said, they had come prepared to hate it. (But were pleasantly surprised.)

Part of this pleased satisfaction is due to Maillot’s clear story-telling, part of it due to the zany and somewhat de-constructed yet totally appropriate costumes, part of it to the Prokofiev score, and certainly in large measure to the excellent, excellent performances give by the PNB cast and its guest performers: returning Prodigal Lucien Postlewaite (Prince) and April Ball (Mother/Fairy), and, as the heroine, Noelani Pantastico. Superb. 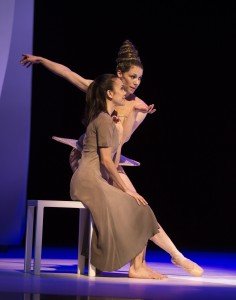 Maillot’s choreography is rooted in classical technique and uses its vocabulary extensively, including pointe work for all of the women except Cinderella. We came to the conclusion that,as she begins the ballet barefoot and in rags, if she were to have done pointe work, this would have begun during the transformation scene when she is given her ball dress and glittering socks/foot covers. Yet, it works. Maillot further expands each character’s motif or unique syntax with quirky odd and sometimes silly gestures and movements.

This work definitely has a European flavor and feel to it, and yet as quirky and zany as some elements were, I didn’t find them too bizarre — or really bizarre at all. I think this is because they fit. Maillot showed good taste throughout. Sometimes creative folk will do something just because they can, but that doesn’t mean of course, that they should. Maillot’s choices (and believe me, when you’re making something, there can be many along the road) always were in favor of elevating and in deference to the elucidation of the story.

He also smartly and wisely followed Prokofiev’s programmatic score, not trying to tinker with or re-order it. The score tells the story too, and this, married to Maillot’s choreography, made for a work that was fun, easy to follow, and lively. 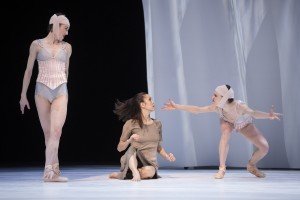 April Ball has amazing technique, facility, and came with years of experience interpreting Maillot’s works. It was a treat having paired together again this one time (only) Pantastico and Postlewaite. Each has great technique, deep artistry, a priceless sense of performing and being in the moment, and they, like Ball, come at the work with several years of experience at Les Ballets de Monte-Carlo. 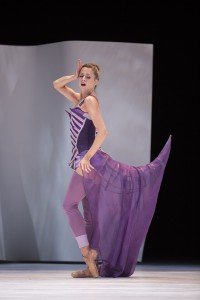 All looked at home — both in the ballet and on our Seattle stage; as if they never left and as if Ball too belonged at PNB as well.

Lesley Rausch gave a superb and sharp turn at the Stepmother. Rausch is strong, clean, clear and her transformation from shrewish and earthy wife, focusing primarily only on her needs and wants, to a more humble stance was etched nicely at the end. A difficult acting challenge worthy of Bernhardt herself.

A foursome riot were the Sisters: Rachel Foster and Sarah Ricard-Orza and as the Pleasure Superintendents, Steven Loch and Miles Pertl, brightly danced.

Maillot’s company is primarily a touring one and this is reflected in the size of the cast and production. The only drawback being that there isn’t enough of a cast to give the entire PNB company something to do, mostly the corps. Hopefully, this is mitigated by multiple castings and performances. I believe I’m to understand correctly that the McCaw Opera House stage is the largest that Cendrillon has been given in, and too that here it was performed for the first time with live orchestra accompaniment (Monte-Carlo uses tape), by the mighty PNB Orchestra itself, this show conducted by Maestro Emil de Cou. 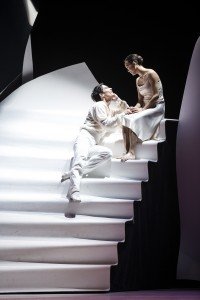 I found myself transfixed and transformed too — thinking, “What a great time!” and that I wouldn’t mind seeing it again.