I sometimes struggle with how to begin a review — what to say, how much, how little. Pacific Northwest Ballet’s production of Kent Stowell’s Swan Lake, however, tends to lend itself to an ease of writing. As the great English ballerina Margot Fonteyn once observed about this iconic ballet, “Everything about it is enormous!”  And as often as I’ve seen it (or been in it — once, as Von Rothbart), I find myself agreeing with her, also that there are always new things, some dance or detail that I enjoy more in-depth or that catches my eye.

This time, I was stirred by the mighty PNB Orchestra opening the show having the audience stand while they played the Ukranian national anthem, noting sadly that Tchaikovsky’s own home in Ukraine (his sister’s I believe, where he actually composed a chunk of the Swan Lake score) had been demolished in the war that is now raging with Russia. Very tragic. 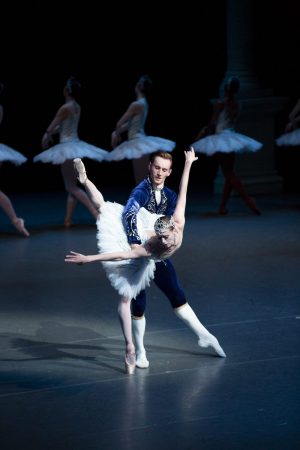 New too (to me) was Odile’s proud hissing at the audience at the conclusion of her fouetté turns. You can tell that both she (Lesley Rausch) and the entire company were really into their roles this night!

New to me, as well, is the soloist James Kirby Rogers who joined PNB in 2021 — a real find and superbly fine as Prince Siegfried. Tall, long of line, his technique excellent and his double cabrioles backward in one of his solos so clean and controlled, with a feline landing that stuck. His pairing with Rausch was a very good match, his partnering secure, and if I were she, I would have total confidence that this guy was going to give me the kind of support, artistic and otherwise, that would allow me to not hold back and to dance with complete assurance, which she (and he) did. I’m not sure if Artistic Director Peter Boal realizes it, but Rogers comes across as a taller version of himself — at least that’s the impression that came across the footlights a couple of times. Just an observation.

I was so happy to learn that our much-beloved Louise Nadeau was returning to the stage, this time out in the important role of the Queen Mother. Her every gesture and acting, spot on. Thank you, Louise, for agreeing to do this!

Kuu Sakuragi tore into his Jester role with great verve and zest, bringing out too the sense of wry humor that’s embedded in the part. Terrific turns, beating of the feet, and a sweeping elevation. 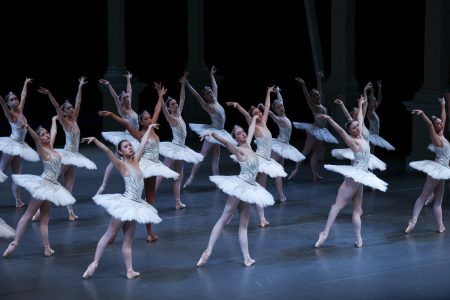 Very notable was the Pas de Trois of Leta Biasucci, Kyle Davis, and Angelica Generosa. These each and collectively have on-the-street creds as superb technicians and here they were also able to deploy their joy and radiance in this sunny pas.

Perhaps the heart of this ballet is its Act II lakeside scene with 24 cygnets plus Odette and the Prince. The ensemble work was doubly impressive, given that we’ve only recently come out of a pandemic and the dancers had to work in alternate ways for so long. They, and the work of the rehearsal directors and stager Francia Russell, really pulled it off. (They also benefitted from Stowell’s rehearsing them.) Clean, clear, moving as one or in perfect sequence as it should be. I was pleased that this production includes both the iconic Four Little Swans bit AND the Big Swans (demi-soloists Cecilia Illiesiu and Sarah Pasch) along with Amanda Morgan in the Pas de Trois. (There is a production in Portland that leaves out the Big Swans — ahem, cough, cough…) 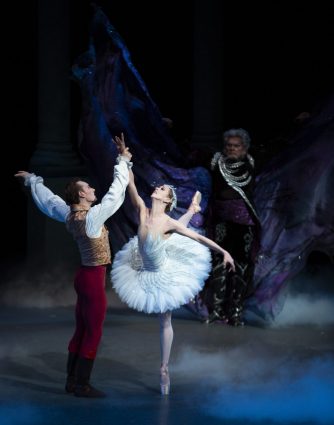 I found it interesting that what used to be termed the Russian Dance of Act III is now the Persian Dance — appropriate for these tough political times, but also, I seem to have the faint recollection that Tchaikovsky used an actual Persian, and not Russian, tune for this music.

We have to note the other sunny dance — the Neapolitan Dance of Christian Poppe and Clara Ruf Maldonado. Very well done! Glad too to have two character dances as a part of  Act III — the Czardas and Spanish.

I noted earlier that Rausch was into her character, both as Odette and Odile, and she nailed all 30 of her fouettées (yes, I count; sorry) and Rogers also nailed his solo work. Their adagio work was excellent with a nice use of timing, making, for example, the supported sautés fouetté into attitude sequence above excellent and the whole great.

The company was a cohesive whole and the crowd cheered and was lifted and energized by this excellent performance. No wonder PNB is at the top of its game and no wonder that all ballet company marketing departments secretly wish that all ballets could be titled Swan Lake.