Jerome Robbins’ Fancy Free is the first in a trio of works — the others being the stage musical adaptation and then the movie version of the stage show. The stories told to me by Nelle Fisher, who was in the original musical, of working with Robbins — and later how he called her to request her assistance with revivals of his work [Nelle had a great memory for movement and could remember all of his legendary “version”], have always made me love this titan’s vision and his choreographic and directorial output. So I was thrilled when PNB premiered its production of Fancy Free in 2006 and was delighted to see this Judith Fugate-staged revival for PNB’s American Stories ten years later.

Robbins is a master of creating character and story, and he does this right away with three sailors who are on a 24-hour leave in New York City and the fun they look to have, including flirting and bantering amongst themselves — initially only two ladies cross their paths and agree to dance with them. There was great fun and amazement with Jonathan Porretta’s double tour en l’air to the splits, James Moore’s cocky sailor, and Seth Orza’s Rumba — don’t we all wish we could move our hips like that!? Lesley Rausch was great in the Janet Reed part, as was Noelani Pantastico in the red purse carrying Muriel Bentley part. Elle Macy was a knowing and slightly sassy soubrette whose last minute appearance at the end of the ballet re-energized our dumped sailors…and off they went hoping for perhaps one last dance or kiss before shore leave was up.

This 1944 work with music by the great Leonard Bernstein was and is still an instant classic. 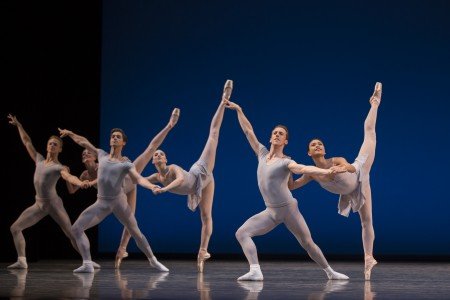 George Balanchine’s 1957 Square Dance is just about his most sunny and bright ballet — and one with a very creative and unusual premise — pairing American Square Dance with classical ballet. And it works! Beautifully. PNB uses the version without the onstage band and caller, but this comes off well too. Using traditional square dance formations and patterns, he’s crafted a ballet that is fun to watch, yet is somehow high art.

Margaret Mullin and newcomer Dylan Wald as the principal lead couple owned it. I remember watching during PNB’s Teachers’ Seminar a couple of years ago as stager and PNB’s Artistic Director, Peter Boal, taught and coached Wald — I believe when he was still in the PNB School Professional Division — and how all of us were impressed then. He is even more impressive both as a partner of Mullin and also in the demanding and elegant solo work.

Twyla Tharp’s Waiting at the Station was a commissioning gamble that has paid off big for PNB. Even with a master, you never quite know if you’ll have a hit on your hands or not, and here PNB does indeed. Somewhat mystic — a father comes back after his own funeral to ride a train and to reassure his son– what’s not to like about Tharp’s dances and concept? Set to the jazz music of Allen Toussaint, her group dances are lively, interesting, and fun, while tempered with a trio of spritely fates who remind this ballet’s star, James Moore, that it’s time to move on.

Waiting at the Station is a superb showcase for Moore and for Price Suddarth who dances the role of his son. The audience stood and cheered for the cast at the conclusion of the dance.

I also loved the visual non-sequitur of mismatched height pairings with Noelani Pantastico and William Lin-Yee, and Laura Tisserand and Jonathan Porretta. The entire cast looked liked they were having fun — doing very challenging steps and sequences, looking as if they were given free rein to show off what they can do — and boy, can they ever do it! Virtuoso dancing with a light story.

This was a great program concept with a trio of nuggets. I can hardly wait for the Encore Program coming up soon!