It takes a math whiz to calculate the total number of gifts given in the song, “The Twelve Days of Christmas,” unless you use the Internet, as I did: 364 total exciting and charming items. By number, this pales in comparison to Pacific Northwest Ballet’s production of George Balanchine’s The Nutcracker. As stated in its press release:

“99.97% of PNB’s new production of George Balanchine’s The Nutcracker® was built entirely by artisans, craftspeople, carpenters, painters, and animators in Seattle, WA

Over 50 drapers, stitchers, first hands, milliners, dyers and painters created the costumes. PNB’s shop was not large enough to accommodate the number of costumers required, so some of the costumes were constructed at the Seattle Children’s Theater and Seattle Repertory Theatre costume shops. There are 154 costumes in the show, not counting duplicates (i.e., multiple versions of the same costume, for different-sized dancers playing the same role – Sugar Plum Fairy, Cavalier, Dewdrop, etc.) 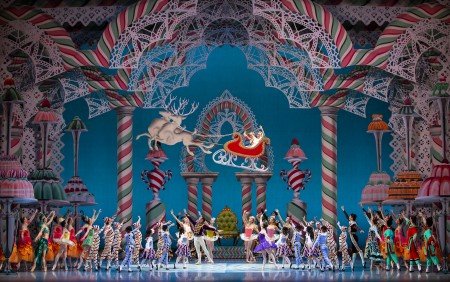 Each Snow skirt has nine layers of various fabrics. There are 56 points on each skirt.

760: Petals on the Waltz of the Flowers costumes. (19 costumes, including extras.)

10 feet and 60 pounds: The width and weight of Mother Ginger’s skirt.

175: Number of snaps on the Mother Ginger costume.

4,000: Holes cut by hand to create the lace “doily” tutus and headpieces for the Marzipan costumes.

500: Yards of tubular horsehair used for the Party Mothers’ hairpieces.

Eagle-eyed audience members may spy one gold tooth on the Mouse King.

Speaking of mice: Seventeen mice (eight adult mice, eight young mice, and the seven-headed Mouse King) were built by Erik Andor and a team of fabricators in his Pioneer Square studio.

98 yards of “fur” have been used to create the mice. They have a total of 230 whiskers. Each adult tail consists of 25 segments. Each ear is made up of six pieces.

35 men and women in the PNB Scene shop built and painted the sets and props.

There are 22 painted drops.

3,000 square yards of fabric were used in the creation of the scenery.

343 gallons of paint were used in the painting of the scenery.

An actual walnut was used to model the construction and painting of the Nut Boat.

It took 400 hours to build the Christmas tree. At its full height it stands 40 feet. There are 450 lights on it.

30 cubic feet of “snow” will be deployed during the Act I Snow scene, per performance.” 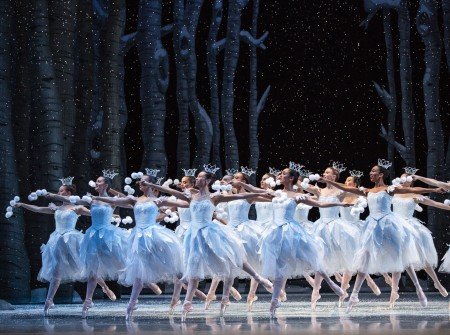 As fun and interesting as all this is, for me the real magical transformation happens between the moment the house lights dim and when the curtain goes up. During this time I’m transported. It’s hard to believe that Balanchine created his ballet bon-bon to the world more than 60 years ago. With the production values (see above) refreshed by PNB, it seems indeed ageless. And, I have to confess: as much as I’ve clung to the former Sendak/Stowell production (which was truly amazing and awesome for 32 years), I have to finally admit that perhaps it was time for a change. All of the production values are out of this world, including two films — the first that plays during the Overture and the second that shows Clara trying to find her beloved nutcracker. The performance is pretty, bright, and cheerful, with a happy ending, too. (The Sendak, being Sendak, ended on a slightly macabre note, with Drosselmeier, who caused all of the furor in the first place, laughing at Clara). 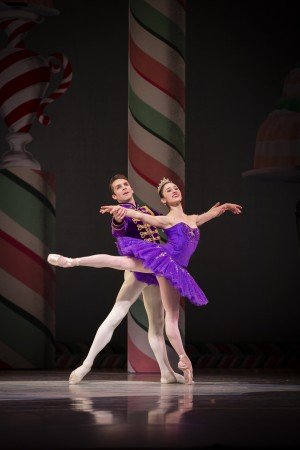 And the magic held together for me with the superb dancing by PNB’s top-tier talent, which permeates every level. This was so nicely demonstrated by the Opening Night cast, crew, and musicians, who all pulled together to make lift off happen. I heard more than one audience member exclaim,  “Wow!” During  the Grand Pas de Deux, when the Sugar Plum is pulled several feet en pointe, someone behind me said, “Oh, my god!”

I’ve enjoyed the dancing of principal Leta Biasucci ever since I first spied her on stage with Oregon Ballet Theatre, and it was rewarding to see her given the start of the run with the iconic part of the Sugar Plum Fairy, with her Cavalier, Lucien Postlewaite. Ms. Biasucci sparkled and seemed to enjoy her assignment. Mr. Postlewaite essayed a role that’s a bit subdued, yet his manner was appropriate and in keeping with character. Both the catalyst and glue for the arc of the story is Herr Drosselmeier, danced with clarity and zest by Seth Orza. It was fun observing the pairing of one of the newest corps de ballet members with one of the most experienced principals as the Grandmother and Grandfather, Clara Ruf Maldonado and the inimitable Jonathan Porretta.

The “real” dancing kicks off with Harlequin (Leah Terada) and Columbine (Angeli Mamon) with Kyle Davis’s Soldier Doll during the Party Scene of Act I.

Miles Pertl danced the slightly cartoonish character of the Mouse King. I don’t know why, but the gestures Mr. Balanchine gives him/it to do remind me of some of today’s political figures, pumping their arms out in defiance of the world.

Hot Chocolate (Spanish) is zesty, quick and fun. Margaret Mullin and Steven Loch led the corps, in contrast to the drawn out exotic Arabian Coffee, with Lindsi Dec who has length and extension that pairs well with the flavor of the choreography. 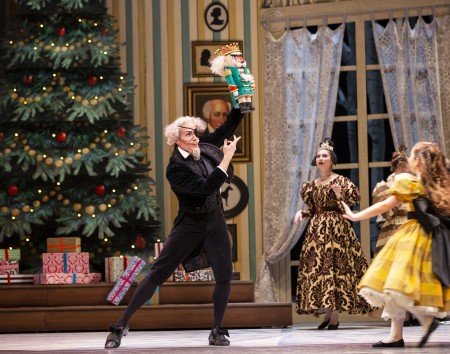 Tea goes by way too quickly, and it’s a fun trio with a surprise that literally jumps out of a large tea box. Kyle Davis got to show off his elevation, jumping to second position in the air several times, and then diving back into his box.

While I personally prefer a Russian Character dance to the Russian music, Balanchine’s swooping and twirling Candy Canes are fun and impressive nevertheless, and Ryan Cardea was confident and assured as he horizontally twirled his Hula-Hoop, backed up by a small corps of “Hoopers.”

Marzipan contains probably about the most brilliant (as in the jewel sense) choreography of the evening, with Waltz of the Flowers coming in at a close second. Angelica Generosa unleashed her dazzling technique with the double gargouillades being no trouble at all. Great stuff!

Some Mother Gingers ham it up more than others, and typically PNB’s show a modicum of restraint, but Guillaume Basso hinted at the fun with over-acting arch (and an arched eyebrow), eliciting laughs and engendering fun as the little eight Polichinelles pop out from “her” skirt, prance around the stage and return.

Dewdrop is a major role — technically challenging and vivacious throughout. Laura Tisserand sailed her way through her assignment with aplomb, leading her corps and demi-soloists of petunias. I’d say that Waltz of the Flowers is the second-best chunk of invention in this ballet. Balanchine uses “panels” of the corps, making geometric designs that swoop as fast as they hook and unhook.

This festive occasion was brightened by preshow magicians in the foyer, several backdrop stops along the way to take photos and selfies, and the largest Christmas tree, outside of the one that grows on stage.

The mighty PNB Orchestra was led by Emil de Cou.