What a wonderful way to honor the memory of my older brother’s birthday (born on 11/25) than to attend a bright and cheerful ballet?

I was also reminded that two great things came into this world in 1892. One was my maternal grandmother — Helen Harriet Bogue Gerlach, the only one of her siblings who debuted in Seattle. The other happened on the other side of the globe in Russia, this being the birth of Tchaikovsky’s Nutcracker.

The new production of George Balanchine’s The Nutcracker by the Pacific Northwest Ballet (PNB) was birthed last year, and it was a joy to see it again. This round I brought along a cousin and her husband who had — believe it or not, never, ever seen a live production of any Nutcracker, let alone this one. 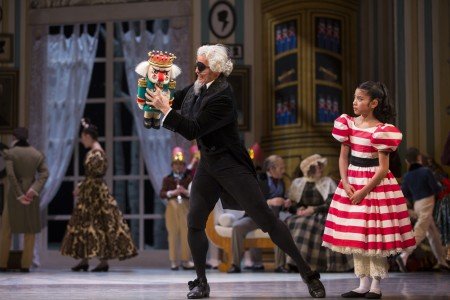 And loved it we all did, from the opening animated montage that cleverly, beautifully, and humorously depicts a snow-laden village and sets up the story line, to the amazing and glorious costumes and sets designed by Ian Falconer and lovingly executed by PNB’s Costume and Scene shops. New this year, too, was the animated montage to accompany the solo violin entr’acte (lovely music but in the past a very dry patch with nothing happening on the stage). The montage shows a carriage and horses being driven away and then lights slowly being turned off in the house, to Clara’s running out of her bedroom to find her nutcracker present that she had left in the family drawing room — a great and welcome addition.  All of  this, of course, was on the production side.

The dancing was great as well — cleanly and sharply executed by the PNB dancers, including students from their School. Leading off the cast were a radiant Sugar Plum Fairy in the guise of Leta Biasucci, Cavalier danced by the elegant Benjamin Griffiths, and Dewdrop with powerhouse Noelani Pantastico. 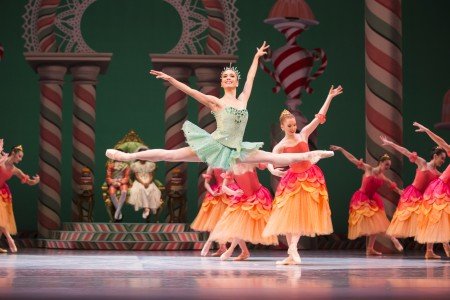 The Sugar Plum Fairy leads off Act II, and her character is that of a benevolent magical queen who, after welcoming Clara and hearing the prince’s mice battle tale, commands her subjects to dance for them. Concluding the dancing of this act is the Grand Pas de deux — which is what so much of the evening — and expectations — builds toward. No pressure, right?

Biasucci and Griffiths were very well paired in terms of height, technique, timing, and interpretation. This pas showcases everything that you typically associate with ballet:  beautiful lines, clean execution of hard steps and balances, promenades, jumps, turns, daring lifts, and 600 watt smiles.

As a small note, I liked how the Sugar Plum Fairy makes her entrance in what’s now called a European-length (just above the knee) tutu and then comes out later for the duet in what I think of as a Russian-length one (short and flat like a pizza-pie). This was very effective and somehow totally right. 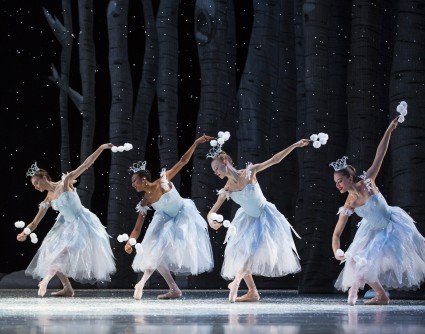 My only fuss with Mr. Balanchine might be that there is no real solo for the Cavalier; just a small one at the top of the coda. (The Sugar Plum Fairy in this production gets her celeste solo at the near the top of the act, not in the usual pas de deux sequence. It was very well done, by the way, with her manege of piqué turns receiving applause.)

Dewdrop (with a backdrop of Flowers) and the Act II Marzipan Shepherdesses are among some of the most technically challenging bits of choreography devised. These also show Balanchine’s invention and genius-level composition abilities at their finest. Pantastico easily powered her way through double sauté rond de jambe en l’air, multiple gargouillades, quick-to-hold balances, and a fouetté combination that mere mortals need not attempt. 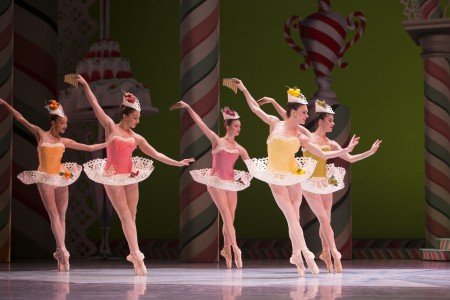 In control and seeming to really be having fun with the part was Rachel Foster as the head Marzipan. Try dancing while holding pan pipes and then making small hops on a single pointe — oh, and while turning and making attitude or a développé.

My guests were most impressed by James Moore’s jumping-through-the-hula-hoop Candy Cane dance, aka, the Russian dance. He displayed such great energy and joy — not to mention ample air-time. Wowza.

In talking with the assistant conductor, he offered, and I whole-heartedly agreed, that we need this kind of buoyant lift in our world right now — perhaps more than ever. He commented that beyond silently conducting from his seat in the audience, he found himself going beyond the work of observing tempi, choreography — all of the conductor stuff, but really being led to watch the show and being lifted himself, carried away by the blend of music, choreography, dancing, and production. (The show I saw was conducted by maestro Emil de Cou, leading the mighty PNB Orchestra.)

This Nutcracker was a truly timely show — remembering my brother, and thinking what a great year was 1892.