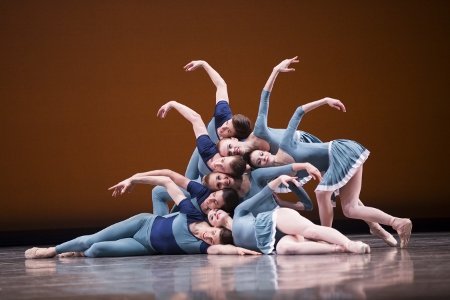 Everyone Is In a Rush

Every now and then a really good and quite memorable repertory program comes along – and you can just feel the vibes in the air, with everyone collectively knowing and experiencing the same karma. Such was the case with Pacific Northwest Ballet’s  “Rush” program lately seen at McCaw Hall this past Saturday evening. Joined by an opera singer friend of ours, it’s great getting feedback from a non-dancer – although in this case someone who loves dance and got to work with Pina Bausch’s dancers in Wuppertal. Our diva was particularly smitten with the second work on the bill, PNB’s premiere of Alejandro Cerrudo’s Little mortal jump, which she described as “cinematic” – and lo, and behold when we got out at the interval to look at and read our programs, the notes from Hubbard Street Dance Chicago, for whom the piece was originally made, also similarly describes it.

Filled with humor [and some surprises], some visual non-sequiturs – such as two individuals each being lifted up by a group and “stuck” by Velcro to two movable walls, and some great dancing and pas de deux, it was charming and fun and clearly a dance the dancers enjoyed as well.

The program opened with excitement – Paul Gibson’s Rush, set to an equally exciting and pulsating score by Martinu. This welcomed back, notwithstanding Romeo et Juliette from last rep, the return of our much-beloved Noelani Pantastico to regular repertoire, here partnered by one of the strongest and best male dancers active today, Seth Orza. Rush is a big work with a medium-sized cast that fills the stage with panache and joy in this seminal work.

He probably couldn’t get much more in demand. Justin Peck’s Year of the Rabbit, based on the Chinese Zodiac, is light in meaning but dense enough in texture. It is also a big company work, that showed off how much Leta Biasucci can do – and of her range. She expresses a natural joy on stage and while petite, her technique and presence are enormous. She has quickly become someone that we very much look forward to seeing perform every time, along the lines of the great Deborah Hadley, Patricia Barker, or Louise Nadeau.

The bookend works were accompanied by the PNB Orchestra under the baton of Emil de Cou.