While stage performances appear to be resuming (now or in relatively short order) in Europe, this is still not the case in the U.S. So dancers and companies are continuing to provide either unusual or online (or both) offerings as outlets for artistic creativity (and essential financial support).

I can’t possibly highlight all the performances, streaming or live, that will be available in the remaining days of September, much less through the end of the year. With that in mind, below is a summary, and non-exhaustive, listing of things (events or performances) by individuals or small companies that might have escaped attention and that might be of note because they address contemporary issues in what may be an unfamiliar way or that involve area-based artists. In some cases I’ve excerpted specific programming from the complete listing of events a company or theater has scheduled that might be of particular interest to many in this area.

James Whiteside, a Principal Dancer with American Ballet Theatre with an alternate persona as pop singer JBDubs, is launching a global casting call for his latest music video for “Left Alone” (a song he wrote about his own coming out story, his challenges and his own suicide contemplation), the next single off his third pop record, Bodega Bouquet, released last month. In collaboration with The Trevor Project, a leading organization that provides crisis intervention and suicide prevention, the video will seek to raise funds to support their work in supporting LGBTQ youth, while celebrating inner strength, resilience and bravery in the LGBTQ community and beyond.

The video project seeks submissions of dance, movement, lip syncing or other talents for potential inclusion in a music video, to be produced and premiered this fall. The specifics are as follows:

To submit a video for possible inclusion: https://forms.gle/cMq2H645qRfmeUXN9

All videos should be no longer than 30 seconds and shot in landscape orientation.

This call is open to all ages, and the deadline for submission is Monday, September 21, 2020 at midnight, EST. [I regret being unable to get to this sooner.]

Lori Belilove, described as a third generation Isadora Duncan dancer via “direct” lineage, curated and staged “Dances of Isadora,” a solo vehicle performed expertly by Sara Mearns on several occasions a few years ago at a Fall for Dance performance, with the Paul Taylor Dance Company, and at other venues. Belilove and The Isadora Duncan Dance Company return for an encore performance at Untermyer Gardens in Yonkers, New York, appearing in the Walled Garden amphitheater where The Isadorables performed in 1923.  The program will consist of Duncan dances and original choreography (presumably reflecting Duncan’s influence). 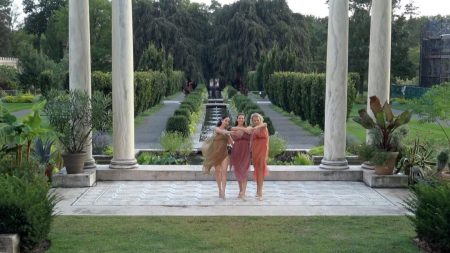 The classically inspired Untermyer gardens and its “Greek Theater” provided an ideal setting for Duncan’s dance style and its connection to ancient architecture. The tradition continued when Isadora Duncan Dancers, under the direction of Irma Duncan, returned to the site in 1932.  Belilove, who trained with two of the original Duncan dancers who had performed there, studied these recorded tapes in preparation for her company’s appearance.

New York’s Joyce Theater has announced a series of Fall 2020 streaming performances that feature unfamiliar companies that address contemporary issues with contemporary sensibilities. The first round of streaming performances, available through The Joyce’s online platform, JoyceStream,  begin on September 22, and will continue through October 19, 2020. Additonal programming for Fall/ Winter 2020 will follow. Access to these and other programming on its site is free, but donations of any size will be helpful to ensure the future of the NYC area’s diverse dance landscape.  A listing of presently scheduled companies follows, together with a brief description of the dances that are being made available:

Far From the Norm (London): A hip-hop collective, Far From the Norm presents four short films, including a documentary about the troupe’s artistic director Botis Seva. Can’t Kill Us All unravels one man’s mental unrest as he navigates the turbulence of dealing with two global pandemics; Reach, by director Billy Boyd Cape, explores themes of love, abandonment, and fatherhood; and B.R.E.A.T.H.E. is a response to the deaths of Black people at the hands of police. The documentary, Botis Seva: Air features a rare solo dance performance by Seva. (no running time provided)

In a co-production with The Metropolitan Museum of Art, NYLA’s Artistic Director Bill T. Jones and Taiwanese-American installation artist Lee Mingwei have collaborated on Our Labyrinth, a multi-part live-streamed performance event co-produced by NYLA and The Metropolitan Museum of Art.  Part 1 of the series already occurred (on September 16), and is available on YouTube. (Its running time is over 4 hours) The remaining two programs are listed below.

The 92Y Harkness Dance Center has announced a series of online master classes with current and former Artists in Residence, featured choreographers and presented performers. Workshops take place every other Saturday throughout the fall starting on Saturday, September 26, and runs through December 5. 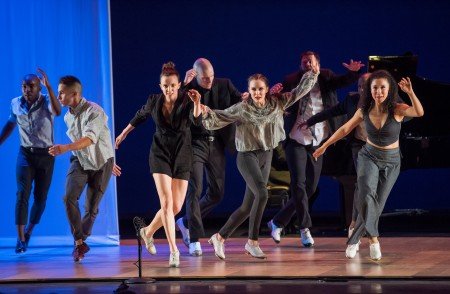 All workshops will be held online on Zoom, offering separate two-hour dance experiences geared to students ages 12-18 and 18+, and featuring a variety of contemporary dance styles, including Gaga, Hip-Hop, and Tap. The series begins on September 26, and runs through December 5. Additional information is available at the 92Y web site: https://www.92y.org/dance/