[Performance photographs will be added upon receipt.]

It’s been awhile since Parsons Dance last appeared at New York’s Joyce Theater – by my recollection, two and a half years. Last year’s annual season, like most everything else in the performing arts, was cancelled because of the pandemic. Last Tuesday, the company returned to the Joyce with a vengeance.

Most companies that perform at major venues in New York have already attained a certain level of recognition, and usually present choreography and execution at a high caliber. Parsons Dance does so as well or better than most others, a reflection of the quality of the company dancers and the almost mercurial nature of the choreography created by company co-founder and choreographer David Parsons. This program was no exception.

The evening included four pieces by Parsons, one of which was a premiere, and premieres by two other choreographers – one by BalletX co-founder Matthew Neenan, and one by Chanel DaSilva, a former member of the Trey McIntyre Project. 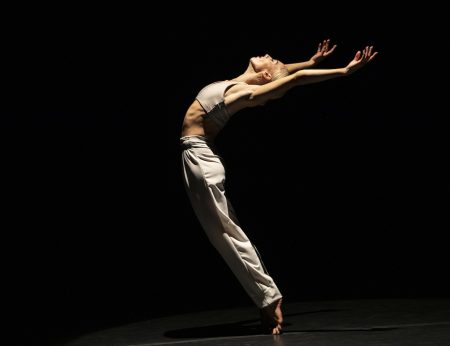 It’s tempting to begin by discussing the three pieces previously created by Parsons because they so typify that mercurial side of Parsons’s oeuvre, and because they’re so good, but I’ll resist that and focus first on the premieres.

Neenan’s new piece opened the program. Past Tense, which was commissioned by Parsons, is a fine opening piece. The dance is choreographed to unspecified music by Pietro Locatelli, an 18th Century Italian-born Baroque composer who performed throughout Europe in the 1720s, and relocated to Amsterdam in 1729, where he remained for 35 years until his death.

Locatelli is now relatively obscure, but it was apparent immediately that the accompanying score was classical Baroque. I would not have expected that late Baroque music would fit neatly into Neenan’s choreographic repertory – I don’t recall a piece of his that has relied on Baroque music for its score (and maybe this accounts for the dance’s title) – but Neenan and the Parsons dancers do a fine job with it, with no intention beyond creating a pleasant, entertaining piece of abstract dance. Aside from having a disappointingly unremarkable ending (as abstract dances often do), it sufficiently set the tone for the rest of the evening.

The score allows no time for the choreography to proceed aimlessly. Through the continuously shifting subsets of the seven-dancer cast, Neenan plays with the score (as well as periods of silence) but is not dominated by it: one enhances the other. And since there’s nothing here that hints at any narrative, there’s no intellectual component to interfere with appreciating the movement alone. With its athletic qualities and frequent extended arms in motion, it’s a little Paul Taylor-ish, which is perfect for this company, since Parsons himself was a member of that company.

On the other hand, On the Other Side, though also without any dominating narrative (although one can be discerned if a viewer works at it), is far more cerebral. And for what’s basically an abstract work, that’s an unusual and interesting quality.

There’s nothing new in On the Other Side, but it’s how DaSilva puts it all together that’s intriguing. The piece begins with one dancer applying what appears to be masking tape to the stage floor (the floor was already covered with rows of such tape, presumably to act as the equivalent of graph paper to make the in-piece applications more accurate). He is soon followed by other members of the eight-dancer cast doing the same thing. All the tape applications are identical rectangular forms that fill the stage. Gradually, one dancer occupies each of the rectangles (which appear illuminated under Christopher S. Chambers’s lighting) except one, downstage right. The dancers begin to move in unison, and then (or at the same time, I don’t recall), another leaps onto the empty rectangle, looking somewhat lost.

Choreographed to the identically-named alternatively rhythmic and melodic score by Christina Spinei (a Nashville-based composer who specializes in music for dance), created two years ago apparently in collaboration with DaSilva, who began work on this piece around the same time, On the Other Side is filled with interestingly-captured movement while staying within the rectangular boundaries. As the dance evolves, at times the illumination of some of the rectangles is “turned off” and the piece focuses on dancers in the remaining illuminated rectangles; at times dancers briefly move outside the rectangular boundaries or more than one dancer will occupy a particular rectangle; and at times that lone dancer (Deirdre Rogan, who seemed to be everywhere at once in the ensemble pieces in this program) seems eager to learn how to join the others, and at other times seems content to remain on the other side and do her own thing – all while still looking somewhat lost.

All this sounds terribly simplistic and somewhat déjà vu, but because of the way DaSilva and Spinei have structured the movement and the music, it’s more complex, and more intriguing, than one might expect. It’s a surprisingly engaging dance. 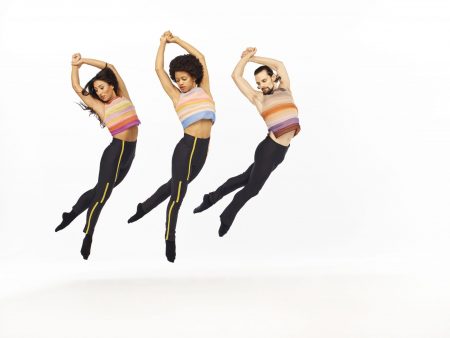 Parsons Dance in “The Road”
Photo by Andrew Eccles

The last of the premieres, and the dance that completed the program, was another very engaging dance, this time choreographed by Parsons himself. Like the others, it doesn’t break new ground or have earth-shattering significance – it’s just a great deal of fun to watch.

Choreographed to seven songs by Yusef / Cat Stevens, including two that even I am familiar with (“Oh Very Young” and “Peace Train”; the others are “Angelsea,” “On the Road to Find Out,” “Tea for the Tillerman,” and “Trouble”), the only common denominator is the melodic consistency of songs – there’s no underlying narrative or hidden message, nor even a general theme. Instead there’s an overall ambiance, and a circular “coming together” sense to much of it – and here that’s a good thing, because that ambiance is optimism and joy.

The segments flow seamlessly, and feel as serene as the songs, but that doesn’t mean that they’re without the usual Parsons Dance energy. Here Parsons does what he and his company do best – dance full out, and with an abundance of good feeling.

Only one of the dance segment displays any direct connection to the words of the accompanying song – though that might be a product of my lack of familiarity with the lyrics of the other songs. That exception is The Road’s concluding song, “Peace Train,” in which on occasion the dancers simulate a train in motion and an overall direction as if the movement generally progresses from one place to another linearly. [The version used here doesn’t exactly jibe with my memory of the song as it was originally released in 1971. It’s the same song, but with a slightly different, more treble and crisp, sound.] But don’t think that The Road has any similarity to Christopher Wheeldon’s DGV: Danse à Grande Vitesse (in New York City Ballet’s repertory), another dance visualizing a train in motion. This train isn’t built for speed; it’s as mellow as a gentle breeze.

Sandwiched between these three premieres were two Parsons classics and one that undoubtedly will soon reach that level. Their common denominator is their novelty, and their sophistication.

Balance of Power, a solo created last year (reportedly for Anderson, but here danced by Diienno) was inserted between Past Tense and On the Other Side. It’s strange and wonderful.

When the curtain opens, Diienno is seen balanced upside-down in a handstand. He holds that for a few lengthy seconds, and then stands and percolates for the next five or ten minutes with muscle pops and limb thrusts to punctuations in the eponymous score (composed and performed live by Giancarlo De Trizio), balanced with brief periods of sauntering nonchalance. Diienno rarely leaves his position upstage center; the motion is all from his torso out. [There may be some “locking” here also, but I don’t recall with certainty.] It’s a powerful test of strength to be sure, but it’s also a balancing act between extremes. It’s similar to but very different from (and more sophisticated than) street dance, and it’s extraordinary to watch Diienno navigate the entire dance and emerge not looking in the least exhausted: it was exhausting to me just watching him. 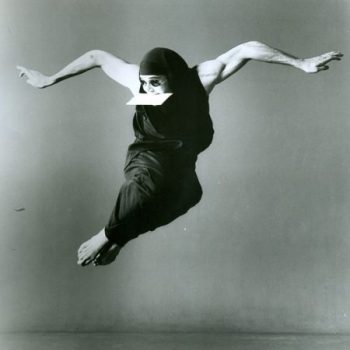 The Envelope, first postmarked in 1984, opened the second half of the program. Seeing it for the first time, as I did here, is a gas; I suspect that seeing it more than once would just enhance the pleasure. Briefly, The Envelope, choreographed to “Arrangement of Overtures” by Gioachino Rossini (arranged by Charles Gouse) visualizes a hot-potato-ish envelope that the strangely-attired dancers – each is dressed in black, looking like monks in a monastery from another planet who drank too much of the spirits they brewed – repeatedly try to get rid of to no avail: one way or another, it’s always returned to sender. The Envelope isn’t slapstick; it’s far too sophisticated for that.  But it’s intriguingly funny to see how many different ways Parsons can have his dancers say the same thing without appearing in the least repetitious; on the contrary, one tends to look forward to Parsons’s next variation on the theme.

The program’s penultimate piece is one of the company’s signature works. Created by Parsons in 1982, Caught is a masterpiece of ceaseless wonder and excitement. To “Let the Power Fall” by Robert Fripp, Parsons has one dancer (here it was Anderson) move from one isolated stationary coned spotlight to another, gradually increasing the speed between “spots” until the spots morph into strobe lights, intermittently illuminating the dancer who moves, or leaps, or jumps, from one spot to the next in darkness – and capturing her while she’s in the air. Anderson here delivered her usual super-human performance, as masterfully executed as was the lighting designed by Parsons Dance co-founder Howell Binkley (who passed away last year, and to whom this Parsons Dance season is dedicated). Caught is a classic unlike any other.

Parsons Dance will be in residence at The Joyce until December 12. Catch them if you can.

Parsons Dance at the Joyce: Dance Doesn’t Get Any Better