So what do you do when there are multiple performances by multiple ballet and dance companies running concurrently at different venues, each of which you want to or should see? You prioritize, temporarily postponing one in favor of another where the performance or piece won’t be repeated. So on Thursday I finally caught up with Parsons Dance during the second week of its two week run at the Joyce Theater.

Maybe, in this case, that wasn’t the best of decisions. Had I seen it sooner, I’d have been able to rave about it sooner. For sheer entertainment value, the program was the finest overall contemporary dance program I’ve seen so far this year. Featuring five dances by Artistic Director and Co-Founder David Parsons (one jointly with company dancer/rehearsal director Abby Silva Gavezzoli) and one by Trey McIntyre, there wasn’t a clinker in the bunch. 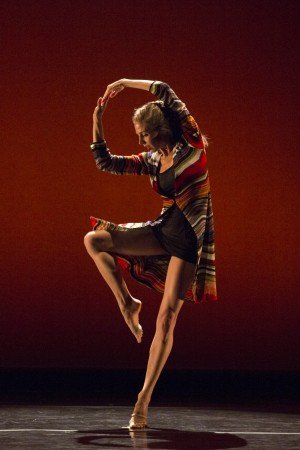 This program was the same for each performance during the run other than the Opening Night Gala, at which Parsons premiered a new pas de deux (Stranger to the Rain) to music by Stephen Schwartz, who accompanied the dancers live on piano. Missing that was unfortunate, but it enabled me to see Parson’s Wolfgang, which replaced it in subsequent programs.

Choreographed in 2005, Wolfgang is a fairly typical choreographic collage to selected music by a single composer – in this case, Mozart. The structure is not unusual – an invigorating introduction to the six dancer cast; a central section that focuses on the dancers in paired highlights, and a conclusion that has the dancers, individually (again mostly as couples) and collectively burning on all cylinders. But Wolfgang is on a higher choreographic level than similar amalgams – basically balletic, but with a forward-looking emphasis illustrating the composer’s timeless compositions (unidentified, but not unfamiliar) in a contemporary light. Originally created for Aspen Santa Fe Ballet, Wolfgang is a great opening piece and introduction to most of the company. Geena Pacareu, Eoghan Dillon, Zoey Anderson, Justus Whitfield, Deirdre Rogan, and Shawn Lesniak excelled, but Rogan, one of the company’s newest members, was especially fiery.

Reflections, which received its world premiere at the beginning of this engagement, is a solo created for Gavezzoli, who has been with the company for 15 years and is retiring after this Joyce season. In a program note, Parsons, who choreographed it together with Gavezzoli, describes her as his “rare and consistent artistic muse,” and it’s easy to see why. She can dominate the stage just by her presence, and moves, still, with both command and refined delicacy and fluidity. 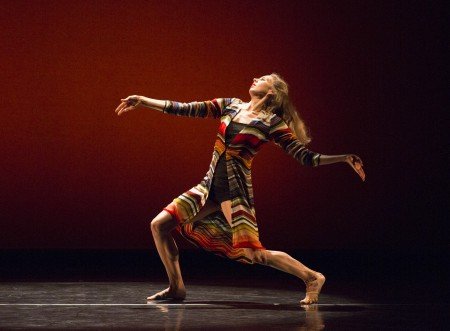 The solo was commissioned by the family of Marilyn Sokol, an acclaimed Broadway and film actress, comedienne, and singer who passed away this past August at age 80 and who is described as having been a close friend of Parsons Dance, to honor her life and legacy. That it does, but in no way is it a choreographed requiem. Rather, it’s a witty and celebratory illumination (to the appropriately selected music – Debussy’s Claire de Lune) of its subject’s character, as well as that of the dancer performing it. Effectively, it’s a reflection not only of Sokol’s life, but of one life in another. It’s a lovely little dance, beautifully executed. And Gavezzoli’s costume (uncredited), a “coat of many colors,” is a perfect representation of the multi-faceted personality and careers of both honorees.

I must concede that of those relatively few pieces of his that I’ve previously seen, I haven’t been impressed with McIntyre’s choreography. Having now seen Ma Maison, which McIntyre created for his Boise, Idaho based company, the Trey McIntyre Project, in 2008 (the company, founded in 2005, ceased performing in 2014), I’m now a convert. This is a show-stopping spectacular dance – in visual appearance as well as its choreography – which the Parsons dancers communicated as something both earthy and magical. 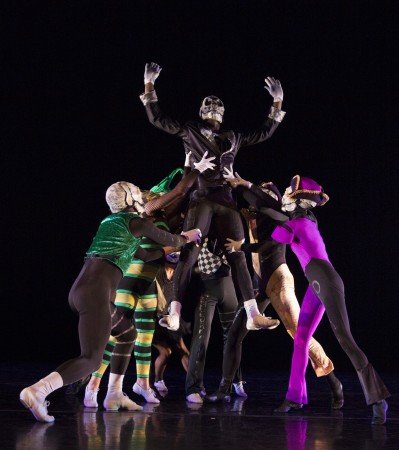 To music by the Preservation Hall Jazz Band, McIntyre has brought a corner of representative, and idealized, New Orleans culture to life (the dance was commissioned by the New Orleans Ballet Association). It’s a non-stop high-quality epic that also happens to be a hoot (or maybe the other way around). With the dancers all wearing skeleton masks and attired in a variety of knockout costumes (by Jeanne Button), my initial thought was that this was more a paean to Mexico’s “Dia de los Muertos” than New Orleans, but perhaps there’s a New Orleans connection here (beyond the music) that I’m not aware of. And it’s far more energetically infused than images, still and moving, that I’ve seen of characteristic New Orleans funeral processions. But if this is what such processions commonly look like, the dead would be brought back to life. Ma Maison is a fabulous piece of dance entertainment, fabulously executed by each dancer – with a level of theatricality far beyond what one usually sees in even the best of dance performances (although with their faces hidden, I suspect each dancer was compelled to project more by movement and stage attitude than might have otherwise been the case).

The genius of Ma Maison, besides the inspired choreography and staging, is in its variety (no scene looks the same as another, despite the commonality of musical style), and in the way, somehow, it allows and encourages each dancer to create a distinctive character that’s maintained fairly consistently throughout, even though the choreography changes and one rarely can identify any particular masked dancer. I was able to identify one dancer whose execution I found particularly vibrant – Pacareu – by the small tattoo on the back of her neck. Another who I found myself periodically focusing on was one of a pair of “harlequin”-costumed skeleton-masked dancers, who didn’t only execute brilliantly, as the others did, but added an unusual degree of polish. During the company’s final bows at the close of the program, one of the company’s dancers emerged still in costume from Ma Maison. It was the “harlequin” dancer I’d focused on, who turned out to be Gavezzoli. 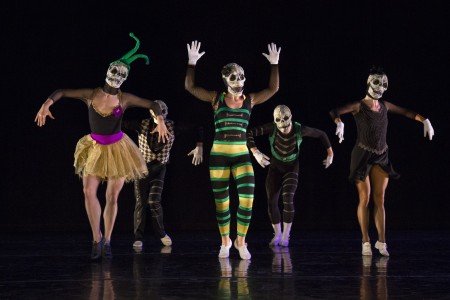 One final note about Ma Maison – the piece was re-staged on Parsons Dance this year, by Chanel DaSilva. DaSilva, a former member of McIntyre’s company, is an accomplished choreographer in her own right, whose work I’ve recently reviewed in connection with programs by Ariel Rivka Dance (including one, coincidentally, just a few days ago). She deserves kudos for this staging as well. I don’t know how Ma Maison looked as danced by McIntyre’s own company, but I can’t conceive of it looking better than as presented here. One visual surprise leads to another, but everything flows seamlessly – even through the ending that isn’t an ending.

In any other program, Ma Maison would be the perfect closer (and it did close the opening night Gala program). That it didn’t close this program shows how strong this company and its repertoire is – strength that continued without missing an artistic beat following intermission.

Microburst, created by Parsons this year, is a piece for four dancers (Pacareu, Dillon, Anderson, and Whitfield) to music by Avirodh Sharma, who performed the commissioned composition live on stage with the dancers. That bare description belies the excitement that Sharma’s music, Parsons’s choreography, and the dancers’ execution delivered. Like everything else on this program, the dance, propelled by Sharma’s mesmerizing tabla playing and “microburst” vocalizations, was transportive – but this time to East India (via Trinidad, where Sharma was born). It’s as fascinating as Ma Maison – and if Sharma decides to change careers at some point, he could easily find work reading commercial legal disclaimers in which the speaker crams pages of incomprehensible verbiage into five seconds of speech, except Sharma would somehow find a way to make it comprehensible. 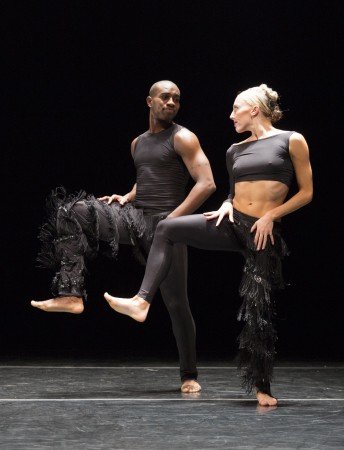 Caught, an early Parsons creation (1982), has lost none of its ingenuity or brilliance over time. I’ve seen it (or excerpts from it) at least thrice previously, but it’s as jaw-dropping now as it always has been. For those not familiar with it, the piece simply captures a lone dancer (here Henry Steele) isolated within sequential domes of light, and then the concept (moving from one light source seemingly invisibly to another) is amplified to have him moving from one strobe light source to another, captured (“caught”) in mid-stride, or having seemingly magically beamed from one illuminated moment to the next. It’s a purely visual concept (as well as dependent on the dancer’s stamina and precision), but like everything else on this program, it’s highly entertaining, and Steele executed it superbly.

The program concluded with another dance inspired by a segment of New Orleans culture and music, and which also was commissioned by the New Orleans Ballet Association. But other than its implicit venue, Whirlaway, which Parsons created in 2014, has nothing in common with Ma Maison other than its brilliance. And like the other pieces on the program, it transports the viewer to another time and place while at the same expanding any perceived limitations of style.

Whirlaway’s inspiration is the music of Allen Toussaint. The four songs (Going Down, Yes We Can, Whirlaway, and Play Something Sweet) may not be his most familiar, but they epitomize Toussaint’s funky, bluesy, “New Orleans soul” sound. All seven cast members (Pacareu, Dillon, Anderson, Whitfield, Rogan, Lesniak, and Steele) excelled, with Anderson and Whitfield particularly memorable.

Although they weren’t what some might consider intellectually deep or choreographically ground-breaking, each dance on this program successfully communicated a unique ambiance, and never stopped tickling that part of a viewer’s brain that responds to pure unadulterated pleasure. I left the theater flying. As I overheard one viewer say to another after the program ended: “It doesn’t get any better than that.” Indeed.