Parsons Dance returned to the Joyce Theater on May 14 for it’s annual New York season: a two week engagement. The opening night program, the same for all the evening programs, included company founder and choreographer David Parson’s Round My World, Caught, and Nascimento, Paul Taylor’s Runes, and the New York premiere of Trey McIntyre’s Eight Women. The company looks as good as it has previously, but this assortment of pieces didn’t work quite as well as other recent Joyce seasons.

Though it received a rave response from the opening night audience, Eight Women was somewhat disappointing after last year’s superb rendering of McIntyre’s Ma Maison. The fault was not with the dancers, who performed to their limits, but with the conception of the piece. 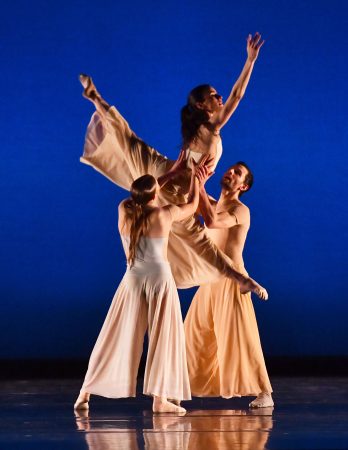 Commissioned by the Joyce, Eight Women isn’t a bad dance – the problem is that it isn’t a particularly good one. Whether intended as a tribute to the late Aretha Franklin, or as an opportunistic effort to capitalize on her recent death, it should be better than it is. The piece is choreographed to six Franklin songs: her cover of Jerry Leiber and Phil Spector’s “Spanish Harlem”; “Do Right Woman, Do Right Man”; her cover of Burt Bacharach and Hal David’s “I Say a Little Prayer”; “The House That Jack Built”; Carole King’s “Natural Woman”; and Ashford and Simpson’s “You’re All I Need To Get By.” But for the glaring absence of “Respect,” these songs are representative of Franklin’s popular work (although I strongly prefer the original versions of “Spanish Harlem,” so memorably rendered by Ben E. King, and of “I Say A Little Prayer,” a hit by Dionne Warwick, and I admit to feeling somewhat uncomfortable when I hear any alternative versions).

The problem with the piece is that McIntyre’s dance reflects Franklin’s distinctive music, but doesn’t do anything more than that. As a consequence (and with one exception), each choreographed song sequence has the same impact as the one before, and the one that followed. 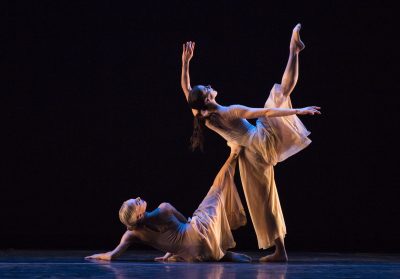 This is not to say that the dance is not entertaining. It certainly is. But even though each segment is distinct and performed by different numbers and groups of dancers, there’s an overall sameness to it. The exception is the choreography for “Natural Woman,” which is assigned to two women: Zoey Anderson and Katie Garcia. But this casting, as carried out choreographically, is nothing more (or less) than two women thoroughly enjoying themselves and each other’s company – being “natural women”: it simply celebrates women being women. As such, it’s the dance’s best segment. Overall, however, there’s nothing at all insightful here. Franklin’s music deserves more respect. 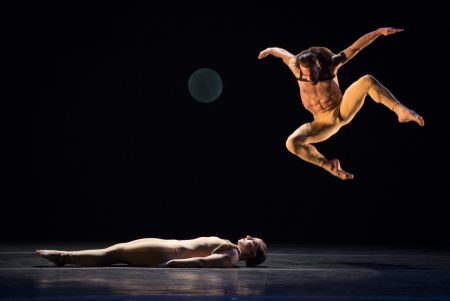 Parsons once danced with the Paul Taylor Dance Company, for a period of nine years. To honor Taylor, who died last August, Parsons chose to present Runes, one of the pieces that Parsons performed with that company.

I hadn’t seen Runes in many years, and I have no reason to believe that this staging, by former Taylor Company dancer Cathy McCann Buck, is in any way less than faithful to the original. But even though Parsons gushes about the piece, to me it’s not one of Taylor’s masterworks. 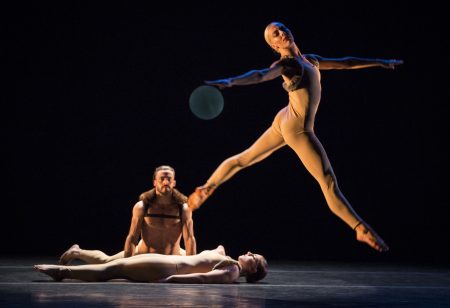 Runes is a difficult dance to enjoy, because there’s nothing about it that’s particularly enjoyable. And its cerebral quality, which is undeniable, is also relatively opaque. For a long time, one doesn’t know much more about what’s happening on stage than that there are references to seemingly primitive rituals – and we know they’re primitives in primitive times by the applied “sheepskin” patches in the costumes (by George Tacet), Jennifer Tipton’s bare “traveling” moonscape, and the score, by Gerald Busby, that “speaks” in sounds of prehistory. As the dance evolves, however, a construction of primitive rituals is really all that there is. [The dance’s title refers to letters in the prehistoric “runic” alphabet, which was the form of written communication among Germanic peoples in northern Europe (and Scandinavia and England) prior to the adoption of Latin letters. As an arrangement of stones, Runes also has a connection to divination.]

As much as I appreciate a cerebral piece of choreography, including one in which considerable thought must be invested by the audience to follow the choreographer’s thought process, it’s difficult to appreciate if you have to divine what’s being said – or written, since in large part the dancers are physical representations of runes – from the images on stage. Some of these images are searing (a woman runs up the chest of a man after one or both die and are somehow reborn – either literally or as representative of a cycle of life from generation to generation; a “regeneration” of sorts); some are shocking – including the famous image of one female dancer running at top speed and throwing herself at and onto the body of a stationary male, which, if nothing else, is a great way to capture attention. But I doubt that attention-grabbing is Taylor’s reason for including such images. And not being able to discern what that, and other runic / prehistoric / tribal images mean, beyond being runic, prehistoric, and tribal images of something (a rite of spring before there was a rite, and maybe before there was a spring), makes the dance less than satisfying. However, the cast, the same as in Runes, clearly adapted to and adopted Taylor’s choreography as their own (not surprising since there’s a kinship between Parsons’s choreography and Taylor’s). 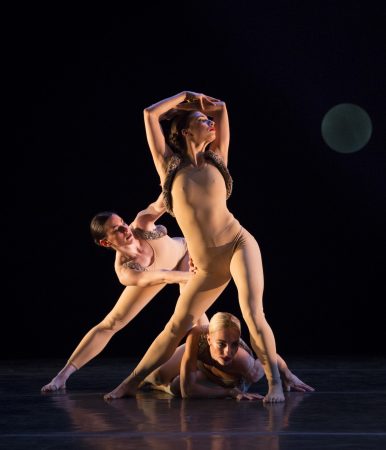 There was nothing at all problematic about Parsons’s own dances, which populated the remainder of this Joyce program, but there was nothing particularly memorable about them either. Round My World, a 2012 dance to music by Zoe Keating that began the evening, is pleasantly energetic and has sufficient variety of staging, tempo, and movement quality to make the presentation look interesting. It’s “circle” theme (arms arched in a circle in the air, or intersecting in a circle form) can be a little much after awhile, but the spirit of it, augmented by the crisply bright costumes in blue (breezy skirts for the women; pants for the men) designed by Emily DeAngelis, brightened the stage. In a prior review, I described Parsons dances as dances of joy. Round My World is an example. Each of the six dancer cast (Anderson, Whitfield, Rogan, Lesniak, Steele, and Garcia) had opportunities to shine either solo or in a duet, and did.

But for its Latin bent, the same can be said about Nascimento, which closed the program, but it had an eight dancer cast (the cast for Round My World, plus Alvarez and Rodriguez). The piece, which Parsons created in 1990, is a tribute to Brazilian singer, guitarist, and song writer Milton Nascimento, who created the score specifically for the company. I reviewed it following the company’s 2016 Joyce engagement, and concluded that the fun was infectious. It still is. 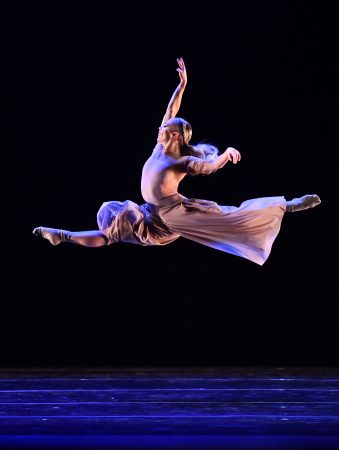 While “joy” characterizes Parsons’s choreography in general, for Caught, the penultimate dance on the program (as it was in 2016), the appropriate word is “awe.” I don’t usually appreciate “concept” dances, but this is one that works: it never fails to entertain, and never fails to bring its audience to a fever pitch. Essentially, after setting the basic theme of a dancer moving around the stage into progressively different spotlight locations, Caught evolves such that the “spotlight” becomes a strobe light, and the dancer moves in darkness, captured in sequential strobe-lit moments – while soaring through the air. For all its simplicity, it’s a remarkable piece of work. At this performance Caught was performed by Anderson, who I saw in the same piece at a Youth America Grand Prix Gala a few weeks earlier. She, and the piece, were scintillating then, and both still are.

Although this program was not quite up to the standards of earlier Parsons Programs I’ve seen at the Joyce, anything that this company does is well worth seeing, and demands respect. I look forward to next year’s visit.

Parsons Dance at the Joyce: Dance Doesn’t Get Any Better