A Film by Kate Geis

If there is one single living legend among American choreographers, it is Paul Taylor. His body of work over a sixty-plus year career needs no elaboration. Like Balanchine, Graham, and Cunningham, each of whom he danced for, and Tharp, who danced for him, his name alone is sufficient to spark adulation, and to rekindle memories. His was the first modern dance performance that I loved as much as appreciated. The first time I saw his company, I flew out of the theater on an Aureole-induced euphoric cloud, while wondering how that piece could have sprung from the same mind that gave us Big Bertha. And I suspect that everyone remembers their first Esplanade. 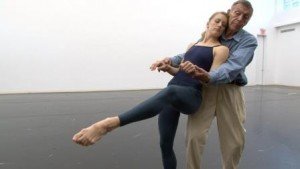 Paul Taylor: Creative Domain, directed by Kate Geis, is not a fly-on-the-wall film like the recent Ballet 422, which allowed the viewer to sit in on the creation of New York City Ballet’s 422nd ballet by Justin Peck. Rather, it’s a documentary that’s part intrusive camera, part cinéma vérité, and part interviews and narrative, all assembled creatively and coherently. Unlike Ballet 422, where NYCB’s grand scale is broken down to its component parts to illustrate the evolution of one new ballet, Paul Taylor: Creative Doman is small scale and intimate. Its focus is not on the ingredients that go into creating a new ballet (although they’re included), but on the ‘how’ and the ‘why’ of Taylor’s creative process.

The result is a curious mix of adulation and craft. Taylor’s dancers live to be cast in his new ballets, and to get some indication of approval from him. He’s why they’re there. His advisors tell him what they think he wants to hear (one seems to turn on a dime when his suggestion meets resistance). In that sense, I suppose, he’s no different from other charismatic choreographers in terms of almost paternalistic loyalty, but the constant adoration can be overbearing.

This is far outweighed by seeing how Taylor crafts a particular ballet as he enters his 80s, though. For this dance (Three Dubious Memories), the creative process is laid bare. From the outset, Taylor is elusive about describing his new ballet to his dancers. It’s about memories, sort of; like Rashomon, sort of. It’s a little unnerving to see how much of the choreography is apparently haphazard, and how much of the movement is created by the dancers with his acquiescence.

Although it’s somewhat reassuring to see how much of a vision Taylor still has – how he knows the way he wants the dance to look – it’s sobering to hear Bettie de Jong, his Rehearsal Director for over 50 years and former muse/dancing partner, say that in all the years she’s been working with him, the only dance that he acknowledged looked like the dance he was trying to create was Esplanade. A question the film doesn’t ask is why Taylor so often, it seems, settles for less than what he wanted. Is he unable to demonstrate it? Is his vision unattainable? Or is artistic give and take and compromise part of the essential creative process evident in the result? Is Taylor more of a craftsman than an artist with a vision? We don’t know.

Perhaps we’re not supposed to know. Seeing how Taylor’s dance is created is worth any unanswered questions left behind. He demonstrates the position he wants James Sampson as Choirmaster, one of the leads, to take, or explains it verbally for him to interpret. He does the same with the steps and positioning for the dancers of the Choir in the piece’s Greek Chorus. And I found his description of the choreographic style he wanted (“2-D” vs. “3-D”) to be particularly interesting. He has Robert Kleinendorst (Man in Green) attempt a difficult lift of Amy Young (Woman in Red), sees him struggle, then accepts a less strenuous alternative that completely alters it. He tells his dancers that it would work, and it does. Choreographers routinely do this, but seeing Taylor do it and seeing how his dancers respond appears peculiarly revealing and genuine. The only visible factor that makes it look somewhat less than genius is that his delivery appears diminished somewhat by his age, although his age appears to have had no impact on his ability to ideate. And the colorful Taylor observations, insights, and remembrances that pepper the film are alone reason enough to see it.

A particular highlight is the wonderful series of interactions between Taylor and the piece’s relatively unknown composer, Peter Elyakim Taussig. When the dance is nearing completion, Taussig is invited to a rehearsal. As he sees how Taylor and his dancers have visualized his music, the looks on his face are priceless.

The film flows seamlessly from rehearsal to interview to commentary to rehearsal, back and forth until the dance’s premiere. Gradually, without undue fanfare, the choreographic creation yields to the finished product. Jennifer Tipton’s lighting design is made to look almost an afterthought, but its impact is apparent and requires no elaboration. While there are some unfortunate fade-outs as the premiere performance progresses, Three Dubious Memories appears indeed Rashomon-like as Taylor originally described it. The three memories are not of the same event, but rather demonstrate how malleable memories, like Taylor’s creative process, can be.

Geis, cinematographer Tom Hurwitz, and executive producer Robert Aberlin have done a superb job. Aside from the hero-worship, the only other criticism is why it took so long to put this film together. Taylor created Three Dubious Memories in 2010; it premiered in early 2011. The work did not receive strong reviews, and is already, at least temporarily, out of the repertory. But it’s the creation of the dance, not the dance itself or its critical reception, which is the film’s subject, so the length of time it took is only a somewhat irrelevant observation. And as for that hero-worship – this is Paul Taylor. It goes with the territory.

Paul Taylor: Creative Domain
Director: Kate Geis
Running time: 86 minutes
On general release: September 11, 2015 in New York City, then across the US from September 18 (although it has been active on the festival circuit since its premiere in February 2014).
For more details and a list of screenings visit http://www.paultaylorcreativedomain.com.