Paul Taylor Dance Company closed out its 2017 Lincoln Center season with Taylor’s “usual” assortment of dances that energize you, make you think, make you laugh, and make you scratch your head. Those dances on the two additional programs I attended included another of the season’s premieres, and repeat performances of Lila York’s Continuum.

Much of the Taylor oeuvre can be grouped into broad and overlapping categories – as I suppose is the case with most choreographers who’ve had an opportunity to build an oeuvre. There are exceptions, of course, but there’s the irreverent Taylor, the evocative Taylor, the Taylor pieces with biting sarcasm, the Taylor pieces that just bite, the insightful Taylor, the Taylor pieces that can whip an audience into a frenzy, those that make you smile because they’re funny, and those that make you smile because they’re so very good. And then there are those very few pieces that should have been reconsidered and perhaps left on the studio cutting room floor. To one extent or another, examples of each were on display in these last performances. 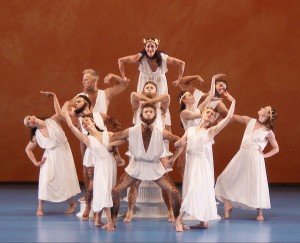 Had I known in advance that Ab Ovo Usque Ad Mala (From Soup to Nuts), which I’d not previously seen, was choreographed to music by P.D.Q. Bach (Peter Schickele) – Royal Firewater Musick and Howdy Symphony – I would have known what to expect. Schickele’s music is hilarious, as is Taylor’s dance.

The dance’s title is a Latin phrase that, accurately translated, means “from egg to apples,” and colloquially is the equivalent of the dance’s subtitle. First performed in 1986, Ab Ovo Usque Ad Mala is Taylor lampooning our fascination with things classical in general and Greco-Roman in particular, but giving us a crackling good time on the way to the Forum. One can almost hear Zero Mostel (or Nathan Lane) humming to Schickele’s unhummable score. 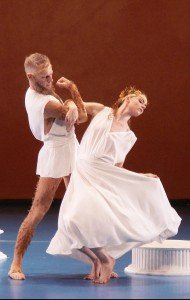 When the dance begins, it all looks real; a slice of Roman life lifted from some strange Roman frieze, until you realize it isn’t (which doesn’t take too long). Taylor breaks down Greco-Roman society in the context of breaking down and reassembling Greco-Roman architecture; it’s a hoot, cleverly supported by Alex Katz’s columnar/pedestal sets, ridiculous headpieces, and drapery togas.

Ab Ovo Usque Ad Mala is also a travelogue of sorts that takes us back to ancient Rome, strips it of idealization, and turns it into a spoof that the audience can laugh at, and with. Which is a poor segue to the travelogue of sorts that is Ports of Call, a piece in a similar satirical vein, but that’s not worth the few half-hearted belly-laughs it gets. The dance, which premiered at the beginning of this engagement, is essentially a collection of one-note site gag scenes. The best part about it is that it’s mercifully short.

To music by Ibert (Escales and Divertissement), Taylor’s dance “visits” four “ports” – actually, general destinations rather than ports: Africa, Hawaii, Alaska, and Midwest U.S.A. It appears to me that Taylor’s intent is to lampoon tourists and their preconceptions or post-visit impressions via postcards or cell-phone video travelogues, but he’s also mocking stupid Hollywood cultural translations dumbed down for popular consumption.  But it’s not done well. Ports of Call looks like a stitched-together jumble of ideas (‘Africa’ leaning in one direction; ‘Hawaii’ and ‘Alaska’ in another, and Midwest USA in a third) looking for a larger context in which each can be placed. 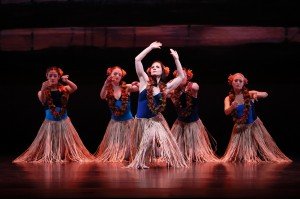 In front of a stage-spanning backdrop that’s vaguely jungle-ish, and to music that sounds more South-Seas then African, the African location dance seems to be an attempt to recreate a 1930s Hollywood take on “somewhere in darkest Africa.” At first I thought King Kong without Faye Wray, but it’s way less interesting. More like a National Geographic exploration adapted for an elementary school class. And this is the one “destination” where, for whatever reason, there’s no attempt at humor – at least none that’s humorous. There is, on the other hand, an attempt here to portray a sense of nobility (noble savages?), but the two-dimensional imagery goes so far wrong that the less said the better. 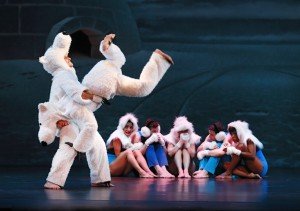 Hawaii begins with the backdrop set reduced to an oversized postcard. Clearly non-native women dance something resembling a hula wearing grass (more like hay) skirts, and then are replaced by non-native men wearing Hawaiian “tourist” shirts. The only thing missing was Don Ho. In Alaska, to a postcard backdrop of an igloo amid a snow-covered expanse, freezing men and women move/dance/huddle like they’re freezing, and are then joined by a pair of polar bears dancing some sort of Alaskan jig. The dancing bears were the best part.

In the final segment, Taylor choreographs an essentially one-note joke about the wedding of a very pregnant bride within the exaggerated spiritual and starched confines of a church.  I sensed, as I watched it, that I’ve seen this same dance in another satirical context, but can’t quite place it. 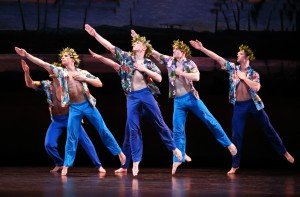 It’s not unusual for highly regarded choreographers to create mistakes. For example, Balanchine had PAMTGG (Pan Am Makes The Going Great.) [For gen-x’ers and millennials, that was a Pan Am advertising jingle.] PAMTGG is generally considered a disaster, so much so that the New York City Ballet web site doesn’t provide a description of it: it just existed. And like the ballet, Pan Am, once considered the U.S. flagship international airline, has long since disappeared. But PAMTGG is no more a measure of Balanchine’s choreographic accomplishments than Ports of Call is of Taylor’s.

Syzygy, however, is one of Taylor’s masterworks. It’s in a similar vein to other Taylor pure movement pieces, which may or may not hint at a subject beyond the movement itself. But the movement is the dance’s reason for being, becoming increasingly fascinating and exciting to watch. Ultimately, it lifts you out of your seat onto the stage. 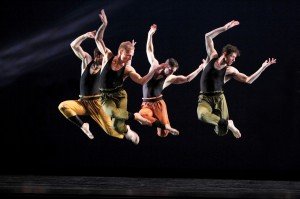 Created in 1987, Syzygy’s feel is thoroughly contemporary/futuristic. At times I thought I saw echoes of Jerome Robbins’s New York Export: Opus Jazz, or Interplay in terms of playground-like youthful exuberance or local flavor, except here the playground is galactic, and the youthful dancers particles buffeted by cosmic wind. [Syzygy is defined in the program as the nearly straight line configuration of three or more celestial bodies in a gravitational system. I suppose there are straight lines in there somewhere.] 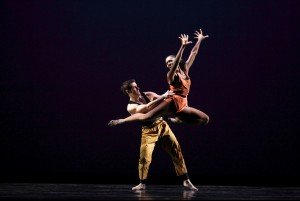 All Taylor has done here is to collaborate with score’s composer (and now Music Director) Donald York to create a consistent dance language, one I don’t recall ever seeing before or since, in which his dancers move as if they’d been filleted, faster than lightning bolts, concurrently with an overall sense of being both out of control and kept together by some force emanating from beyond the playground. Each dancer moves in composite slinky/angular/lyrical manner as if the movement quality was grounded in laws of physics. All the Taylor company dancers were fabulous: Madelyn Ho, the piece’s gravitational pull and intermittent focus, was merely sensational. 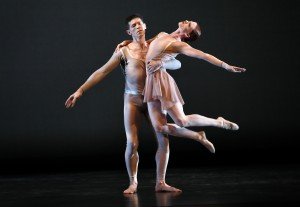 Heather McGinley
and Sean Mahoney
of the Paul Taylor Dance Company
in Lila York’s “Continuum”
Photo by Paul B. Goode

Ho also assayed the “lead” role in the second of two additional performances I saw of Continuum (she danced the role when the piece had its world premiere in Texas last month). She executed sensationally in this piece as well, which is as wonderful on second and third view as it was at its New York premiere at the beginning of this Lincoln Center season. And in my initial review, I failed to mention one of the most mesmerizing of the dance’s segments, the pas de deux with Heather McGinley and Sean Mahoney. Its constant swirling movement that varies with each swirl is sublimely beautiful, and is alone worth the price of admission. 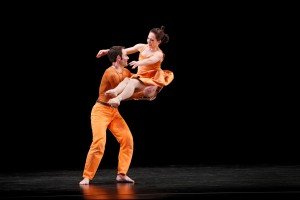 Which brings me to Esplanade, the concluding piece on last Saturday afternoon’s program. I must have my Esplanade fix at least once a year, and this year’s iteration didn’t disappoint. Led by Eran Bugge (what a season she’s had!) in the role that I first saw danced by Carolyn Adams, it was a fabulous performance of a constantly fabulous, enduring work of dance art that, if it doesn’t quite stir the body to kinetic communion with the dancers (like Syzygy), elevates both body and soul to joyful ecstasy every time it’s performed. If visitors from another solar system  wanted an example of the best of modern dance, I’d take them to see Esplanade.