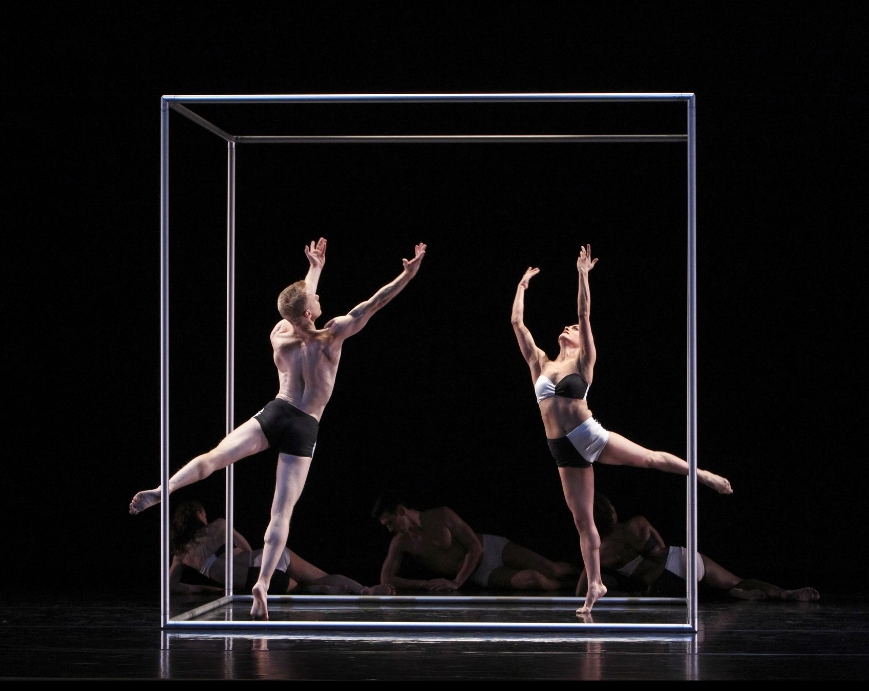 Mercuric Tidings, first performed by the Paul Taylor Dance Company in 1982, features an unfurling of flower petals. Thirteen dancers, pretty in neon pink costumes by Gene Moore, glow in Jennifer Tipton’s rose and later peacock blue light. They dance to excerpts from Franz Schubert’s Symphonies Nos. 1 and 2.  The movement is very balletic. The lines are classical, elongated and elegant.  Upturned and outstretched, with a slight bend at the elbow, arms open and curve out from the body or, flipped, an arm arches over the head as if providing protection from the sun or rain. There is something spritely about the tiny beats of the dancers’ legs, and something evanescent about their repeated fast turns, like cherry blossoms scattering in a spring breeze. Mercuric Tidings unapologetically and successfully delivers joy and sweetness and is apt to stand the test of time.

Unlike the still fresh Mercuric Tidings, Polaris, from 1976, seems dated and worn. Polaris is a work in two choreographically identical parts, and it plays with mirroring and opposites in multiple ways. Usually one has to attend a performance on a second night to see a particular dance with a different cast. Not so with Polaris. The program notes explain that Part II is an exact repeat of Part I, with the only difference being a change in cast, music, and lighting. The set (a very large open cube in and around which the dancers tip and tilt) and costume design by Alex Katz (black and white bikini tops and shorts for the women and black and white bottoms for the men) remain constant. It’s an interesting experiment. The impact of the cast change is huge, as is the impact of a dramatic change in lighting and music. I much preferred Part II, which traded relative lightness for seriousness. The dancers’ expressions in Part II are smoldering and intense. A head waggle in Part I is amusing, but the same movement in Part II is utterly menacing. While rewarding to some degree to see the same movement in a different light, quite literally, I find the choreography rather uninspiring. For me, Polaris amounts to a fun conceipt, but it is not a work I want to see again (twice, since Part II is a repeat of Part I). 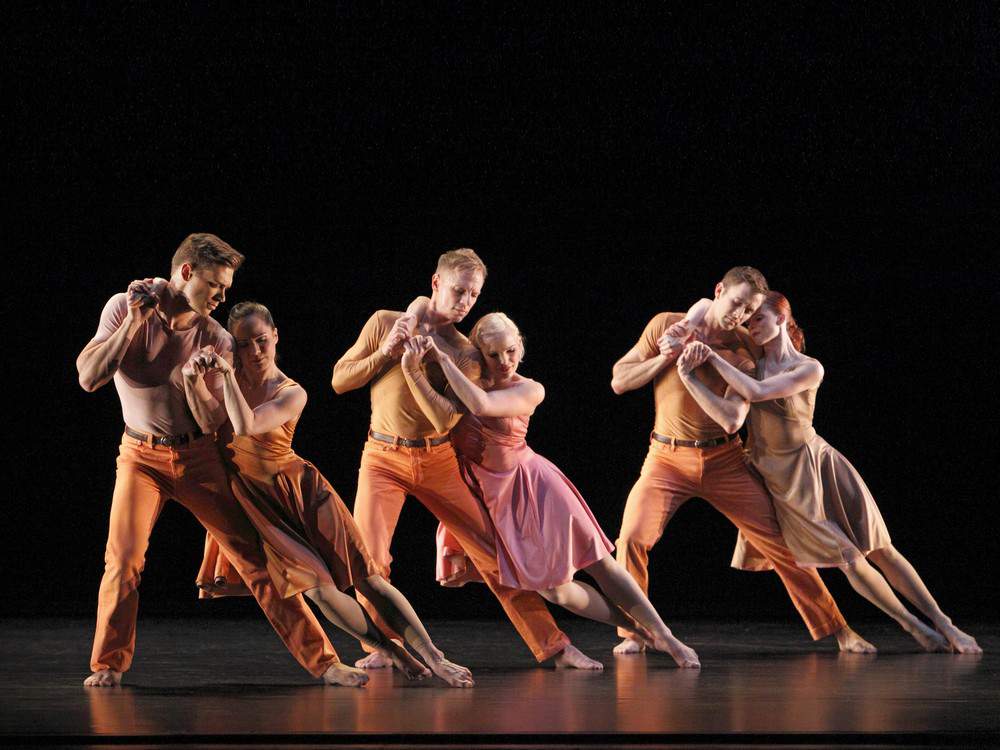 The most moving work on the opening night program was Esplanade, from 1975, which in my opinion, and that of most everyone else who’s seen it, is a masterpiece. Esplanade is timeless, as is the accompanying music by Johann Sebastian Bach. Both the music and movement launch me into elation. Tipton’s lighting, as always, flatters the dancers, and the costumes by John Rawlings are notable for their sunset shades of coral, pink, and bronze.

Esplanade begins with a casual bounciness, but it is not all happiness.  Nine dancers chase each other, running in patterns. They first sport flirty animated smiles. The darker moods depicted, however, are as gorgeous and as welcome as the celebratory ones. The choreography perfectly compliments the music, but doesn’t mimic the music’s notes. Instead, the choreography captures the music’s spirit. Although I can’t say exactly what happens in the various relationships that form on stage, I can say the relationships feel like life. Relationships evolve and devolve and the world keeps turning and the dancers keep running. Dancers hurl themselves onto the floor, and fearlessly throw themselves into the arms of others, to the gasps of audience members. Esplanade is most certainly a work I want to see again and again.


All Articles (per month)