Paul Taylor American Modern Dance returned to Lincoln Center last week for its annual Spring Season. I had planned to attend the premiere of Taylor’s latest dance on March 8, but snow got in the way (I’ll see it later). But I was able to see two programs that included as representative an assortment of Taylor dances as I can imagine (although pigeon-holing Taylor into a niche from which dances might be considered “representative” isn’t easy): Arden Court, Gossamer Gallants, Esplanade, Roses, and Promethean Fire. 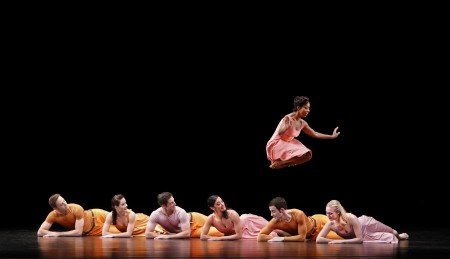 The evening program also included the world premiere of Doug Varone’s Half Life, performed by the Taylor company dancers. I’ll devote most of this review to that piece.

Half Life is both obvious and inscrutable. Something significant is going on – or is intended to be shown – but it requires a leap of faith generated by its title to be decipherable. 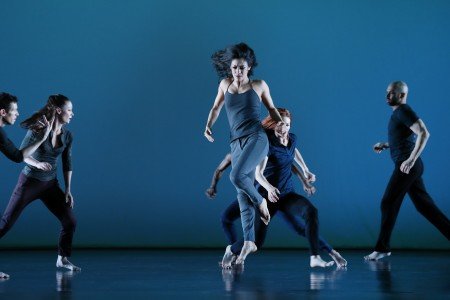 Parisa Khobdeh (center) and members
of Paul Taylor Dance Company
in Doug Varone’s “Half Life”
Photo by Paul B. Goode

Essentially, dancers move across the stage in a fury of non-stop individualized motion from the piece’s beginning to its end. Sometimes one connects physically with another, but these contacts are fleeting, and more a consequence of the seemingly uncontrolled unintentionally violent movement than of anything specific, much less anything with an emotional component. The movement itself is primarily augmented street movement – lots of running in from or out to the wings at varying paces and intensities, seemingly to or from something of huge but unstated importance, with considerable aggressive, frenzied jerking, pushing, pulling, twisting, lifting, falling, bumping, banging, sudden direction changes, occasional walking, and yet more running, bumping, banging….  And it all takes place beneath fluorescent-looking lights that emit a yellowish glow, and which change location and brightness around the stage “ceiling” at irregular intervals (the way lightning manifests, except this light isn’t lightning) until the “fluorescents” brighten into an ominous ugly yellow atmospheric bath that dominates the stage area like oppressive humidity on a brutally steamy day … or like fallout from a nuclear explosion, which is when the frenetic movement suddenly stops.

So what’s the point? 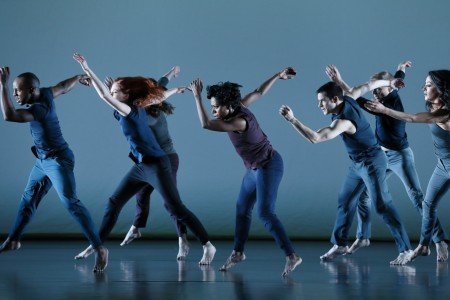 Given the furious pace of the dance, the equally furious tempo of the music (Fuel, a staggeringly scary-sounding “battle of the stringed instrument gods” 2007 composition for string orchestra by MacArthur Fellow and Pulitzer Prize winner Julia Wolfe), and the dance’s title, only three related “points” make any sense (and just presenting a choreographed mess of activity does not seem to be Varone’s intention: there’s more intended meaningfulness to the frenzy than that).

The combined word “half-life” (Varone’s title omits the hyphen) has a specific meaning: the time it takes for a quantity of something to be reduced to half its value. Although the term can be applied, colloquially, in different ways (the half-life of a Broadway show, for example, or a piece of choreography, before it begins to lose its audience and/or whatever significance it may have had), a more common use of it is with respect to something that can be quantified – albeit approximately (e.g., the effectiveness of medication). But it’s usually used in connection with the amount of time it takes for radioactive elements from atomic particles, like those resulting from a nuclear event, to decay. 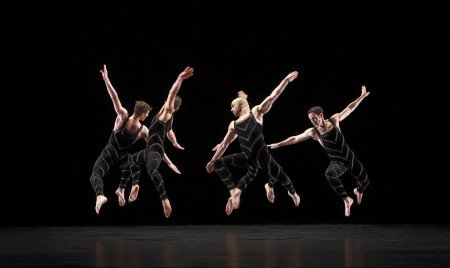 Accordingly, Varone may be visualizing the aftermath of a nuclear explosion (the lowering of those “fluorescent lights”), and the resulting “brave new world” disintegration of society until humanity can recover from the ensuing nuclear winter. Here, however, there’s nothing “brave,” or indicative of survival, to the piece – and the “explosion,” if that’s what the descent of the fluorescent lights signals, occurs at the dance’s end. So all that frenzy isn’t post-explosion, with the dance being some investigation into what happens to humanity after the bomb. If anything, it’s before, and in anticipation, of the bomb: maybe a visualization of sudden panic (like the consequence of the recent false alarm in Hawaii, but in this case the bomb actually hits).

But to me, that’s not Varone’s motivation here. And, at best, it would only be a choreographing of get-me-to-the-bomb-shelter-in-time panic scenes already extant in certain episodes of The Twilight Zone and innumerable sci fi films. 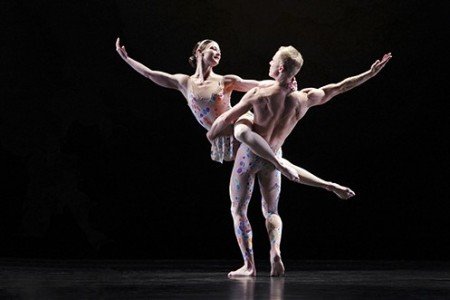 A second possibility is that Half Life is an exploration of humanity’s break-down and disintegration after the bomb (the fluorescent bomb being, maybe, a flash back – literally), with maybe a choreographed Planet of the Apes to be a sequel.

No, that doesn’t work for me either. This isn’t On the (crowded) Beach.

Strange as it sounds, especially because it’s so obvious, to me Varone is choreographing the movement of atomic particles – electrons, neutrons, protons, subatomic particles (like quarks, leptons, bosons, fermions … ), composite particles, and hypothesized particles too numerous to list (my favorite is the “chameleon”) – either as they exist within an atom or its nucleus, or as they’re unleashed and smashed by a particle accelerator. Or it could be a visualization of the particle acceleration and interaction that leads up to, and causes, the release of energy from the process of nuclear fission – or fusion (a hydrogen bomb) – which would tie all this nuclear stuff together nicely. To me, this makes the most sense. 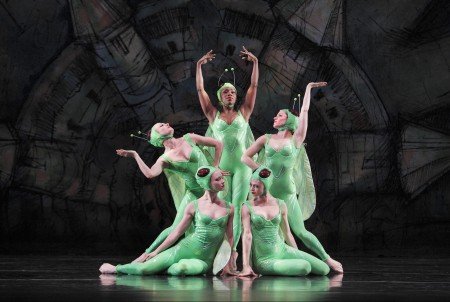 But to go through all this effort to visualize the physical process that leads to the destruction of humanity seems, at best, an unnecessary exercise. The dance doesn’t disclose anything the audience didn’t already know (atomic particles move very fast; and nuclear bombs are bad), or display something that looks insightful as opposed to being merely descriptive, or that makes a statement. It’s just, very seriously and very stoically, the way it is when dancers move like pre-detonation atomic particles.

But I have nothing but glowing praise for the twelve Paul Taylor dancers who survived what might have been the equivalent of choreographic boot camp (as well as for the rendition of the difficult score by the Orchestra of St. Luke’s, under the baton of David LaMarche). Each dancer successfully conveyed the physical energy of an atomic particle directed by forces beyond any of their control. And with all that running and “street movement,” the piece fits neatly in a Paul Taylor program. But without the dance’s title and the ominous lighting, they could just as readily have been mimicking the action of, say, larger “particles” that are shaken in a rotating cage before being released as winning lottery numbers. As far as its lingering value beyond providing the opportunity to see dancers pushed to the limit of endurance, Half Life doesn’t have a long half-life.

Varone’s premiere was bracketed on Saturday evening’s program by two Paul Taylor pieces that couldn’t possibly have been more distinct from it, or from each other. 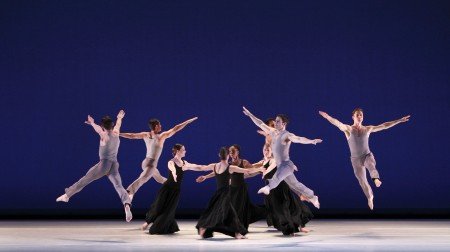 Roses displays a side of Taylor’s choreographic skill not usually seen from him – or, these days, from anyone else: it’s an unapologetic bouquet to romantic love.

The piece opens to a six couple tableau. To Richard Wagner’s Siegfried Idyll and Heinrich Baermann’s Adagio for Clarinet and Strings, six couples come together as a group, a line across the stage or in circles that encircle smaller circles, but most often are shown in individual pas de deux of intricate texture and intimate emotional connections. While the music tends to be similar-sounding and the dance is limited to romantic visualizations, Taylor’s choreography for each male/female couple is so distinctive that the dance never appears monochromatic. 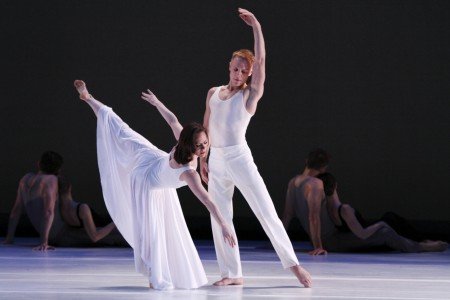 While the word “romantic” may conjure a certain standard set of choreographic images, Taylor’s choreography doesn’t rely exclusively on expectations. Roses isn’t a particularly sexually-infused dance – although mutual attraction is an essential component, nor does it ooze passion – although, in a somewhat muted way, that’s here too. Indeed, in one of the individual couples’ dances there’s a very clear allusion to the couples’ sexual connection that is so fleeting and understated that I suspect most in the audience missed it.

To me, what distinguishes Roses is its sense of mutuality and non-obsessive reliance. For example, a repeated motif throughout the dance, in group segments as well as duets, is one derived from gymnastics (as opposed to, say, acrobatics, a frequent ingredient in contemporary romantic partnering): tumbling. But here, the dancers tumble atop and over their partners – lengthwise. Then, with their positions reversed, the tumbling continues.

Although this is obviously a display of physical intimacy, there’s nothing salacious about it. The process is a continuous tumbling roll, with no one of them dominant, and with each dancer thoroughly involved with, and reliant on, the other.

All six couples – Michael Trusnovec and Eran Bugge, Jamie Rae Walker and Alex Clayton, Heather McGinley and Sean Mahoney, Madelyn Ho and Michael Novak, Christine Lynch Markham and Lee Duveneck, and Kristin Draucker and Michael Apuzzo – danced impeccably, but to me McGinley and Mahoney and Ho and Novak were standouts.

Roses was choreographed in 1985. I don’t know if the same dance could be created in today’s world, which is the only unfortunate thing about it. 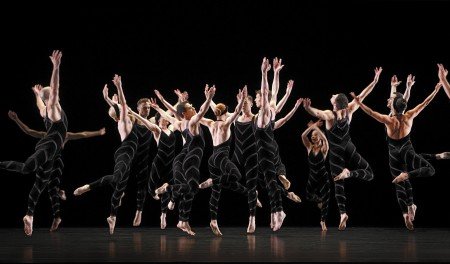 At the other end of the program, Promethean Fire shows Taylor display of frenzy with a purpose. I reviewed this piece during PTAMD’s 2017 Lincoln Center season, and I won’t repeat my observations now. Suffice it to say that the piece, which premiered in 2002, can be seen as Taylor’s creative response to 9/11. The choreography is both cataclysmic and cathartic, horrifying and uplifting, and illustrates in one dance that choreography can relate something that the audience already knows in intimate detail, make it look different, fill it with emotion that isn’t maudlin, and comment on the triumph of the human spirit at the same time. It’s a masterwork. Company veterans Parisa Khobdeh, Trusnovec, and Robert Kleinendorst led the extraordinary 16 dancer cast.

Saturday afternoon’s program featured Taylor classics Arden Court and Esplanade, sandwiching another that is almost on the same level. 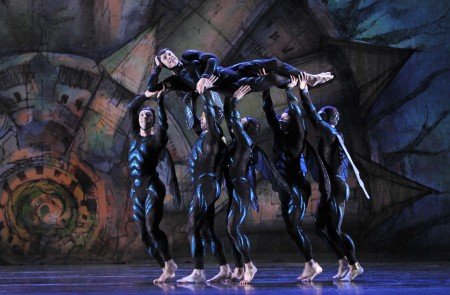 Paul Taylor Dance Company dancer
Michael Trusnovec
and members of the company
in “Gossamer Gallants”
Photo by Paul B. Goode

Gossamer Gallants premiered in 2011, but I think this was my first exposure to it. I’m sure I would have remembered if I’d seen it previously. It has a kinship with Jerome Robbins’s The Cage, but one that could only have been conceived by a somewhat deranged dance critic.

Also, of course, where The Cage is frightening, Gossamer Gallants is hilarious. 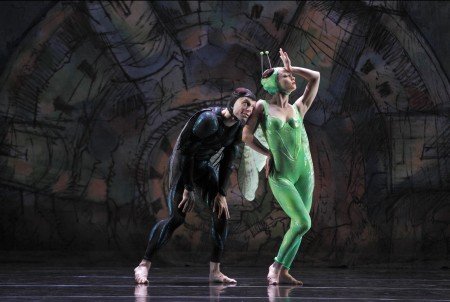 Here Taylor presents six fireflies (distant relatives of Alexei Ratmansky’s Sleeping Beauty bees) with blue/purple iridescent markings against a basic black insect body (all the costumes are by Santo Loquasto) doing what I suppose male fireflies do best: flying on the corner watching all the girl insects go by. After some innocent horseplay, er, fireflyplay, five groovy green goddesses gradually saunter by, swinging their insect hips and shaking their curly antennae. The male fireflies light up, and begin their pursuit – until the lime-green females, looking like praying mantises (manti?) who pray to a very different deity, catch them. And step all over them. The only firefly who escapes with his life, if not his dignity, is the somewhat pixilated odd firefly out.

How Taylor conceived of choreographing this gut-busting little romp to dances from Smetana’s The Bartered Bride is beyond my understanding, but that’s what makes Taylor Taylor. If, like me, you missed Gossamer Gallants in previous appearances, don’t miss it now. 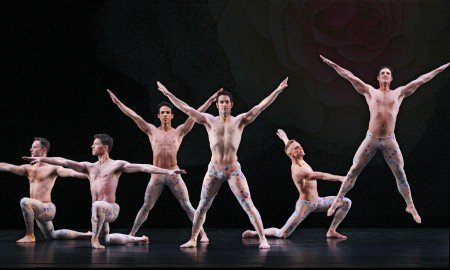 And if you haven’t already seen Taylor masterpieces Arden Court and Esplanade, shame on you. These two dances, which premiered in 1981 and 1975 respectively, are required viewing – at least several dozen times. Nothing more need be said – except that beginning in 2019, PTAMD’s annual Spring Season at Lincoln Center will become its annual Fall Season at Lincoln Center. So if you don’t see Esplanade now, you may have to wait until October, 2019.

Doug Varone and Dancers: Lux, Nocturnes, in the shelter of the fold