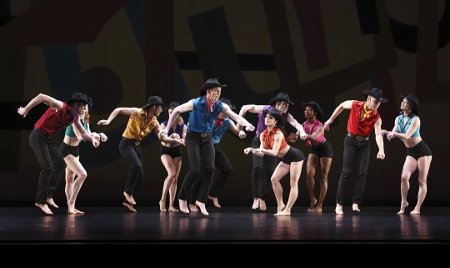 I learned something when I attended Tuesday’s performance of the Paul Taylor Dance Company: that “dilly”, as in “dilly dilly”, is a diminutive of ‘delightful’. Who knew? Well, ok all you linguists. I didn’t know.

But Paul Taylor did. And Burl Ives. Dilly is the title of Paul Taylor’s new dance, which had its New York premiere on this opening night of the company’s 2016 New York season at the David H. Koch Theater. And it’s delightful.

Burl Ives, for those unfamiliar, was an American folk-singer/actor remembered for his not so gentle acting roles (Big Daddy in Cat on a Hot Tin Roof, for example) and his gentle, somewhat jaunty voice. He didn’t have many ‘hits’, but his songs have endured. Unlike other folk singers of his generation (he died in 1995), Ives didn’t inject emotion into his songs – he delivered them straight, simple, and unaffected, with a decidedly non-urban sense but one that wasn’t exactly country either – a style that reflected his mid-western (Illinois/Indiana) upbringing. His most memorable songs include Lavender Blue (Dilly Dilly), Blue Tail Fly (Jimmy Crack Corn), The Big Rock Candy Mountain, and Frankie and Johnny (compare the Ives version with other, more dramatized deliveries) – as well as a slew of Christmas songs.

Taylor has taken seven Ives songs and, with halfhearted apologies to Balanchine and Charles Ives, created an Ivesiana of sorts, a visual journey back to a simpler time that probably existed, if it ever did, only in the mind’s eye, but which is a nice place to visit. The dances are all different, but, like Burl Ives’s songs, are all of a piece. Taylor has given the dance a western flavor that may not be appropriate for the songs (western hats for the men; vaguely western outfits for all – designed by Santo Loquasto), but it works. And unlike his piece to songs by the Mamas and the Papas, Changes, Taylor doesn’t try for too much here. The dances illustrate and enhance the songs, and then they’re over – leaving a gentle glow. 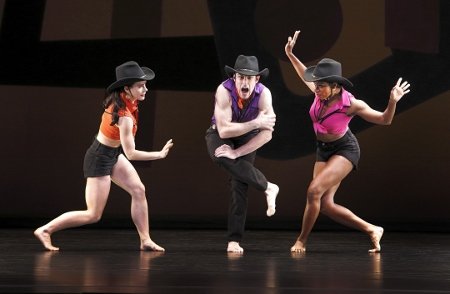 The charm of the piece is its simplicity (or at least the appearance of simplicity). Beginning with Lavender Blue for the full cast of six men and five women, and ending with The Big Rock Candy Mountain, the dancing largely is typical understated Taylor comedy – ‘aws’ rather than ‘guffaws’. My favorites of the bunch were Blue Tail Fly, a minstrel song, with Eran Bugge a very persistent and cutely annoying bug – a flea that’s part hummingbird and part mosquito, who with other such fleas dooms Robert Kleinendorst to a stinging end; and, the sweetly wistful Foggy Foggy Dew, a folk song of Irish/English ancestry, in which Sean Mahoney reflects on his love for a maiden (Heather McGinley). His very Tayloresque (dryly comic) visualization of Frankie and Johnny (led by Laura Halzack and Michael Trusnovec) was also very nicely done. The Doughnut Song and Mr. Froggie Went A-Courtin’ were the other songs included, and the entire cast was wonderful.

The evening opened with the always exhilarating Mercuric Tidings, Taylor’s 1982 non-stop whirlwind of a dance to excerpts from Franz Schubert’s Symphonies Nos. 1 and 2, and closed with his 1975 masterpiece, Esplanade. Mercuric Tidings is all Taylor arms and legs and jumps and skims and group movement that’s broken up and rearranged and slides over the stage like…well, mercury, blended with an abundance of caffeine. Diagonals and circles abound as segments are led sequentially by individual dancers. Halzack and Trusnovec were the nominal leads, but everyone in the cast of seven women and six men danced magnificently, each being singular individuals as well as components of a group. Nevertheless, one who stood out was the company’s newest member, Madelyn Ho, a vivacious sprite who joined the company last spring.

Nothing need be said about Esplanade, other than it is one of those miraculous masterworks, modern dance or otherwise, that not only was groundbreaking for its time but is eternally memorable. I envy those few in the audience seeing it for the first time, but am always grateful for the opportunity to see it, if not weekly, then at least annually. Michelle Fleet, James Samson, Jamie Rae Walker, Michael Apuzzo, Kleinendorst, Khobdeh, Bugge, Halzack, and McGinley comprised the cast that danced with both finesse and fearlessness.

One final note. As he always does, Taylor joined the company for the final curtain calls. Taylor is 85 years old, and still going strong. To anyone over a certain age (and probably those younger as well), he’s an inspiration.