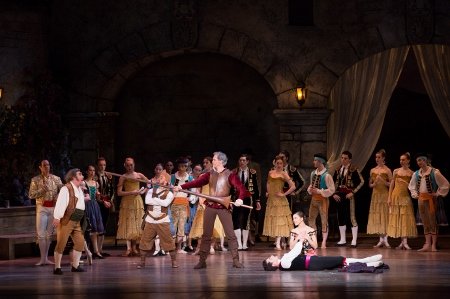 Anticipation has been building for Pennsylvania Ballet’s World Premiere of Angel Corella’s Don Quixote, Corella’s first staging of a full-length ballet as Artistic Director of the company. In press releases, Corella promised his choreography (after Marius Petipa and Lev Ivanov) would be infused with authentic Spanish flair, and he even “purchased authentic costumes, fans, and castanets during his last trip to Spain.” With five different Kitris and Basilios over the ten-day run from March 3 to 13, audiences are practically guaranteed to see fresh faces in debut roles – and not necessarily principal dancers in principal roles. On Saturday afternoon, corps members Ana Calderon and Craig Wasserman took the leads, and the pair supplied all the fireworks that were promised.

After a brief prologue introduces Don Quixote and Sancho Panza (performed by Ballet Master Charles Askegard and guest artist R. Colby Damon, respectively, at all performances), Act I begins as the scrim rises on a town square jam-packed with townspeople. Company apprentices and students from The School of Pennsylvania Ballet join the corps, comprising six couples, six matadors, six fandango ladies, six village children, and two lead flower girls who infuse the scene with color and life. The action is non-stop but not overly chaotic, and with effective mime, the audience has no trouble following the story of Kitri, her beau Basilio, her father Lorenzo (played by Jon Martin at all performances), and her deliciously ridiculous suitor Gamache (played brilliantly by former company member and current Choreographer in Residence Matthew Neenan).

As Kitri, Calderon was feisty from the get-go, standing out in a Spanish red ruffled dress against the blues, greens, and yellows of the crowd. Calderon was appropriately playful and flirty, showing lightness on her feet as she bourreed through an obstacle course of beer mugs with ease. As Basilio, Wasserman was energetic and comical, wowing the audience with spectacularly steady pirouettes, athletic leaps, and quick feet – particularly in the pas de trois with flower girls Marjorie Feiring and Elizabeth Mateer, which was danced at a blistering pace. Equally impressive was Wasserman’s strength in lifting and holding Calderon with one arm high above his head as she rattled a tambourine in the air. When he had to take a step or two to steady himself on the second lift, it was simply a reminder of how difficult this movement is – and if your eyes were only Calderon, you wouldn’t have noticed the adjustment – she remained rock steady. The pair also had great chemistry together and partnered smoothly, but a few of their final poses came just ahead of the orchestra’s final note; however, it’s impossible to tell whether the pair anticipated the music a bit, or if the orchestra was a fraction of a second late. 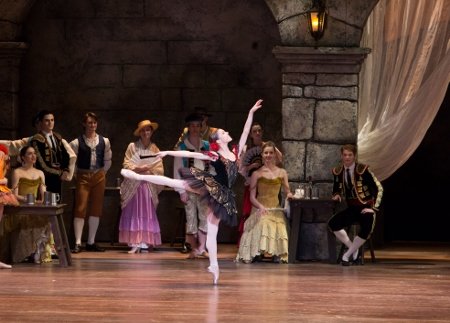 The corps packing the stage was lively and energetic, as always – with standout performances by the Matadors (Alejandro Ocasio, Aaron Anker, Edward Barnes, Harrison Monaco, Russell Ducker, and Michael Holden) who looked like they could have burst off the edges of the stage with their leaps. R. Colby Damon as Sancho Panza nearly stole the scene, just with his comical blowing of his horn as he and Don Quixote entered the village. The only principals dancing at this performance were Lauren Fadeley as Mercedes and Francis Veyette as Espada. Fadeley was as sassy and radiant as ever, but seemed limited by the role – as if she had more sparkle than the role allowed for. Veyette danced with fantastic bravado but just a bit of stiffness, as if his costume was a tad too tight in the shoulders. Regardless, the pair led the corps in a rousing ensemble segment as the curtain dropped on Act I.

Act II picked up the action just where Act I left off – with an impassioned solo by Laura Bowman as one of the Gypsy camp leaders. The gypsy men – Jack Sprance, Michael Matthews, Andrew Daly, Jason Ferro, Durante Verzola, and Randolph Fernandez – deserve individual mention for their audacious acrobatics, but Etienne Diaz as the male Gypsy camp leader was absolutely phenomenal, causing the audience to gasp in amazement more than once with his gravity-defying leaps and dazzling pirouettes. Diaz performs the role of Basilio at other performances, and one can imagine the excitement he will bring to that role. In the Dream sequence, the Dryads showed the beauty, grace, and cohesive synchrony audiences have come to expect from the women’s corps. Amy Holihan was regal and elegant as the Queen of the Dryads, and Kathryn Manger as Amor flitted around the stage with the crispness and lightness of a hummingbird.

Act III returned to the town square, where the main cast showed off their comedic chops in Kitri’s defiant refusal of Lorenzo’s demand that she marry the absurd Gamache (Neenan gets more hilarious in each scene), and in Basilio’s melodramatic fake-suicide. Any minor timing issues noticed in Act I were a distant memory in Act III where Wasserman and Calderon partnered effortlessly and in perfect synchrony with the orchestra. The pair also showed they had a few more fireworks left to ignite as they fired off impressive sequences of leaps and tours, and stunned with the duel sequence of pirouettes. The audience barely had time to catch its breath as the entire ensemble joined in for the final energetic and triumphant finish.

While Pennsylvania Ballet’s wealth of talent is no surprise, watching young stars soar in new roles has been somewhat of a revelation, especially in this production. With the 2016-17 season just announced, including three world premieres, three company premieres, and Corella’s adaptation of Le Corsaire, there are seemingly endless opportunities for the company’s talent to shine. Before jumping to the fall, Pennsylvania Ballet continues its run of Don Quixote through March 13, then continues its current season with “A Program of Firsts” in May, and “Balanchine and Beyond” in June.

Tickets for Don Quixote and upcoming 2016 programs are available at www.paballet.org/current-season

More information about Pennsylvania Ballet’s 2016/2017 season is available at www.paballet.org/upcoming-programs