Pennsylvania Ballet opened its spring season with the premiere of Angel Corella’s re-staging of Swan Lake.. Previously, Pennsylvania Ballet had performed excerpts – the Black Swan Pas de Deux in 1964, Act III in 1972, and Act II and the Black Swan Pas in 1980. In 2004, the company premiered Christopher Wheeldon’s modernized version, which takes place in late 19th century Paris with a ballet company preparing a production of Swan Lake – with Degas-like glimpses of dancers warming up at the barre, an evil Patron rather than a Von Rothbart, and a company gala instead of a royal ball. Wheeldon’s Swan was performed again in 2005 and most recently in 2011, but Corella’s new production, based on choreography by Marius Petipa and Lev Ivanov and  returning to the original setting, is the first time the company has ever presented a full-length traditional Swan Lake. 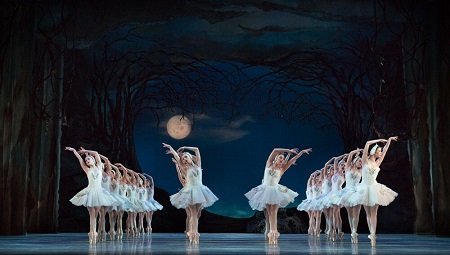 Corella’s Swan Lake is new but feels familiar, with Tchaikovsky’s spectacular and recognizable score played beautifully by the Orchestra of Pennsylvania Ballet (conducted by Beatrice Jona Affron, and featuring violin soloist Luigi Mazzocchi). The production is traditional but streamlined, with a running time just over two hours including one intermission. Beautiful sets (designed by Benjamin Tyrrell, who also designed costumes) transport the audience from a peaceful countryside in Act I where the Prince celebrates his birthday, to a mysterious moonlit forest by the lake where Prince Siegfried first sees Odette, to an opulent palace where the Ball takes place. The ambience is enhanced by dramatic lighting (by Michael Korsch) including a shadowy forest projected on a scrim during scene changes to the lake, and dramatic flashes of lightning in Acts III and IV.

At Saturday afternoon’s performance, Prince Siegfried was danced by Jack Thomas, a member of the corps de ballet since the 2016/17 season – who looked every bit the teenager who was more interested in his new crossbow than in the prospect of getting married. While technically superb, Thomas is so early in his career that it seemed to take some time for him to look comfortable in his principal role, but his fantastically controlled triple pirouettes and wonderfully precise double tours drew shouts and applause from the audience. 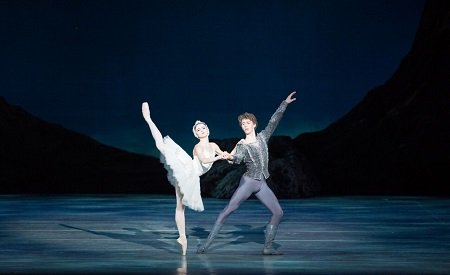 Thomas’s youthfulness seemed especially apparent opposite principal dancer Oksana Maslova, this afternoon’s Odette/Odile (who previously danced the role in Wheeldon’s Swan Lake), who seems to emanate emotion from every limb. Maslova’s flexibility and extension are always impressive, but today her arms seemed to transform into fluttering wings. Although I wasn’t entirely convinced of their romantic connection, the pair was adept in their partnering, with controlled lifts, steady balances, and supported pirouettes – hinting that more performances, more opportunities, and more experience is all Thomas needs to develop his enormous potential. In fact, in Act III when Odette’s series of fouettes is often the most memorable moment, Maslova had a uncharacteristic slight stumble that cut her run short, while Thomas’s dazzling sequence of grand pirouettes a la seconde drew thunderous applause. 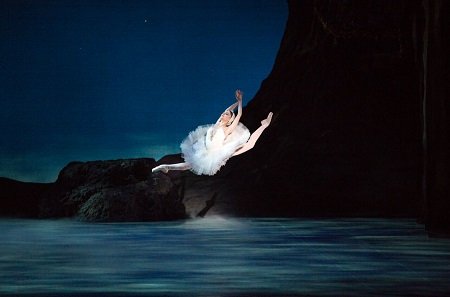 Other notable performances included Etienne Diaz as Benno, the Prince’s friend, whose athletic leaps always seemed to need more space on the stage; Kathryn Manger and especially Yuka Iseda as Benno’s friends in Act I, whose dainty gracefulness added liveliness to the Prince’s celebration; and Nayara Lopes as the Peasant Lady who was animated and playful with the jovial Jon Martin as Wolfgang, the Prince’s tutor. In Act II, the Cygnets – So Jung Shin, Cassidy McAndrew, Lopes, and Misa Kasamatsu – showed excellent synchronicity especially at the start of their sequence, and the women’s corps as the Swans (with Big Swans Alexandra Hughes and Holly Lynn Fusco) flowed smoothly through formations like a single, seamless, morphing organism. 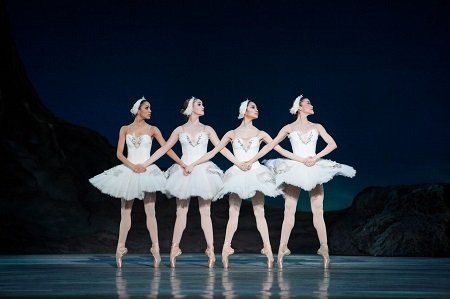 The first glimpse of James Ihde as Von Rothbart was a brief solo to start Act II at the lake, and interestingly, the character looks more “normal” costumed as the evil sorcerer than as the uninvited guest in Act III, where he wore an absurd-looking goatee. Von Rothbart is also given a brief solo in Act III, but spends most of his time instructing Odette repeatedly in the seduction of Siegfried. The Princesses – Alexandra Heier, Siobhan Howley, Kasamatsu, and Jacqueline Callahan – were lovely, and the national dances were lively (featuring Marjorie Feiring, Fusco, Aaron Anker, and Federico D’Ortenzi in the Spanish Dance and Manger and Ian Hussey in the Czardas), but the Neapolitans Ashton Roxander and Peter Weil stole the show with their tambourines and dueling pirouettes. 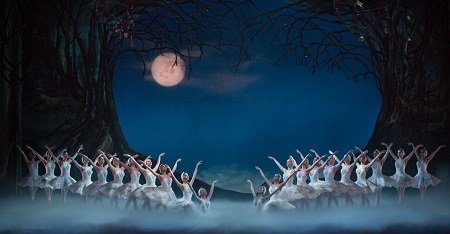 Act IV seems brief, although not necessarily abbreviated – then again, maybe the shortened time mourning Siegfried’s betrayal and Odette’s fate may have contributed to the feeling that their emotional connection was somewhat superficial. Once they each throw themselves into the lake and Von Rothbart perishes on the rocks, the bevy of swans leaves a beautiful lasting impression as the final tableau.