To close this season, The Pennsylvania Ballet presented a number of eclectic pieces in Balanchine and Beyond, with some clear high and low points to this evening’s production. After a turbulent announcement last month in The Philadelphia Inquirer about the large number of dancers departing from the company, this June 2016 production was the first with some very notable absences as well as some new beginnings as the company shifts into its new ensemble of dancers for the 2016-2017 season.

The first selection this evening was Adagio Hammerklavier, choreographed by Hans van Manen. The curtain opened on a stage set with white sheer drapings as the backdrop and side curtains, which matched the flowing white skirts of the female dancers in this selection. There was a constant mechanical sound that seemed to be responsible for the creation of a slight breeze on the backdrop and skirts of the female dancers. The image of the six dancers standing in solidarity at the back of the stage when the curtain opened in the midst of this blowing breeze was quite striking. The group of dancers moved well together and the six were a lovely respite reminiscent of the lovely, cool summer day the audience had just come inside from.  There were moments when the female dancers recalled images of statues of Greek goddesses in movements that appeared to cohesively break and fall together.

Ana Calderon and Harrison Monaco performed the first duet in Adagio Hammerklavier. Their movements reflected the beautiful twinkling high notes of the piano with a particularly evocative moment when Monaco is lying on his back and Calderon balances on his legs, and they seem to simultaneously and gracefully crawl forward together. Calderon and Monaco were fresh figures for the audience in such a central role for The Pennsylvania Ballet. They rendered an adequate interpretation of the duet. Adrianna de Svastich and Russell Ducker performed the second duet in this piece this evening. De Svastich had a series of grand battements en avant en pointe and with each one the labor of the step became fairly clear in the forward movement of her upper body. Ducker partnered de Svastich well.  It will be interesting to see the growth of these two dancers in the next season of The Pennsylvania Ballet.

The high point in Adagio Hammerklavier was very obviously Misa Kasamatsu’s performance with James Ihde. This was the first time Kasamatsu has been featured so centrally and she delivered an inspiring and emotional performance. Kasamatsu and Ihde were able to convey van Manen’s ideology of seeing “people on the stage, not robots.” Kasamatsu’s opening series of slow arabesque extensions partnered by Ihde were quite captivating and in one section of the piece each of her arabesques touches high in the air in unison with the touch of a high note on the piano; it was scintillating and lovely. Ihde danced a breathtaking solo, made of pure dancing without any acrobatics or tricks and one could sense the appreciation in the audience for his maturity and experience on the stage this evening. 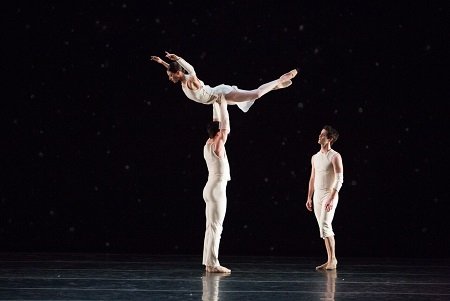 The second selection this evening was the company premiere of O zlozony / O composite by choreographer Trisha Brown, set to music by Laurie Anderson. This was a very interesting and intriguing selection for the company. The curtains open on darkness with lights creating the image of stars. Ian Hussey and Aaron Anker held Lillian Di Piazza sideways with her legs pointed and her arms out in a T shape; they were slowly spinning her in this shape, reminiscent of a spinning satellite in outer space. Anderson’s music entailed these interesting psychedelic sounds overlaid with a woman’s voice speaking words of Polish poetry. This piece was a clear ode to Di Piazza and could not have been more perfect to highlight her beauty and uniqueness as a dancer. The piece itself has a very mechanical and stark quality to it, but Anker, Hussey and very notably Di Piazza brought a beautiful fluidity to it and created a real sense of appreciation for this movement’s artistry.

Di Piazza, individually, was like an austere painting; her face was hauntingly expressionless. She was strikingly beautiful and demonstrated enticingly mocking moments when she made eye contact with the audience and made one feel as if she was staring directly at them. The dancers were dressed in white garments designed by Elizabeth Cannon, and Di Piazza’s had a flowing white skirt trailing behind her, like a shooting star. Her dark hair parted sharply down the middle and bright red lips set in contrast to the night sky were provocative and she permeated the stage with her presence. This piece was striking in the independent yet collaborative movement of the three dancers, and all three were exceptional in the production.  Their movements were immaculate and precise allowing one to focus on the movement as art itself. After a dearth of varied and eclectic movement, the piece closed as it began with Anker and Hussey quietly spinning Di Piazza in the shape of a satellite. 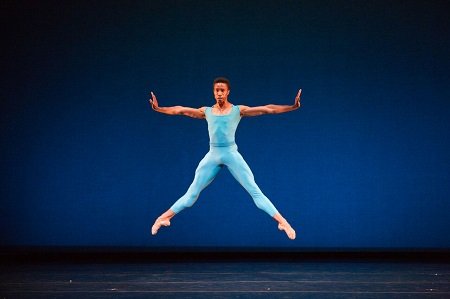 The third selection this evening was Varied Trio (in four), choreographed by Jean-Pierre Frohlich. There was an unexpected casting difference from my program this evening and I was thrilled to have seen this groundbreaking performance by Jermel Johnson and Mayara Pineiro. This piece was definitely a treat and a huge highlight to this evening’s selections. Johnson and Pineiro’s costumes were form fitting one-note plain blue with a simple belt, designed by Marc Happel, and highlighting both of their forms and musculature. The first movement of this piece was set predominantly to the violin, played this evening by Luigi Mazzocchi. The dancers’ musicality was impeccable and the sounds and movement were simultaneously and utterly passionate. The piece moved through three additional sections, each unique in its sounds and movement and each set perfectly on Johnson and Pineiro. They were brilliant. Pineiro is truly a live wire and the city of Philadelphia should not take eyes off of her for even an instant – we would not want to miss anything. Johnson and Pineiro, alone, are a reason to return for next season of The Pennsylvania Ballet because they are electric and magnetic and it is a rare occasion to see energy and talent like this on the stage. 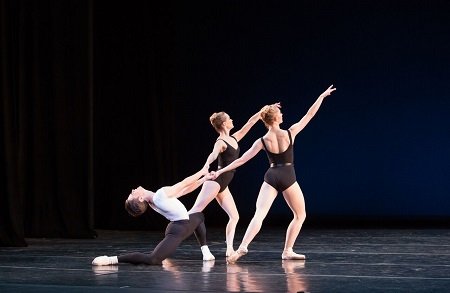 The final selection this evening was The Four Temperaments, choreographed by George Balanchine. Evelyn Kocak and Edward Barnes danced the First Theme.  Kocak was very strong in this piece with gorgeous footwork and nice partnering with Barnes. Amy Holihan and Lorin Mathis danced the Second Theme; Ana Calderon and Etienne Diaz the third. The costume of plain black leotard and pink tights worked well to accentuate the female dancers’ lines and movement and Ana Calderon’s pretty feet and legs were very apparent in her duet. Peter Weil danced an exceptional solo in Melancholic. His back extensions and fluidity were evocative and his movements all felt very meaningful. Di Piazza gave another nice performance in Sanguinic. In a kind gesture of familiarity for Philadelphia audiences, Amy Aldridge portrayed her typically exceptional artistry as a ballerina in Choleric and led the corps of dancers to close this evening’s performance.

All in all, this was an evening that whet the palate for more in some ways but also left us longing for some of the dancers and sentiments we have had to say goodbye to in the city of brotherly love this year.