At any given Pennsylvania Ballet weekend matinee performance, it’s common to see a number of young girls in the audience, but even more so for a Saturday matinee performance of Cinderella (where they seemed to almost outnumber the adult viewers), many with their hair pulled up into a neat ballet bun, and others dressed as Cinderella herself. While the youngsters squirmed with excitement in their booster seats eagerly waiting to see the well-known fairy tale brought to life, many Pennsylvania Ballet patrons anticipated their first viewing of several new dancers in the company after seventeen of forty-three company members left Pennsylvania Ballet at the end of last season.

With fresh new sepia-toned headshots in the program, the entire company looks like it got a makeover, and now lists ten principals, two soloists, twenty-two corps de ballet, and eight apprentices. There are six distinct Cinderella-Prince pairings over the two week run of performances, so the chance of seeing new talent is high. However this Saturday afternoon, Mayara Pineiro and Arian Molina Soca danced the principal roles, and each having been with the company for at least one season, and each having already performed more than one major role, the two already felt like “old favorites.” Neither of them disappointed this afternoon.

It may be my age, or the fact that there were so many youngsters sitting around me this afternoon (or a combination of factors) – but today was the first day I can recall being really disturbed by the physical violence on stage. Cinderella was thrown to the ground more than once and slapped in the face rather appallingly by her Stepmother. Of course it’s part of the story, no matter how it’s told in the ballet (this version was choreographed by Ben Stevenson) – the horrible Stepmother and Stepsisters, the teasing, the bullying, and the abuse. Luckily, the laughter of the children confirmed that the scene (at least in their eyes) was dominated by the comedic antics of the Stepsisters (played brilliantly by Dominic Ballard and Russell Ducker). Throughout the performance, Ballard and Ducker became more and more absurd to the absolute delight of the audience.

Cinderella’s Father (danced by James Ihde) was pathetically futile in standing up for his daughter or himself, but was affectionate and protective (though ineffectively so) in their pas de deux. Therese Davis was an appropriately rigid, stern, and horrifying Stepmother. Among the characters who come to help the Stepsisters prepare for the ball, Harrison Monaco was both graceful and amusing as the Dancing Master who hopelessly attempted to teach the Stepsisters to dance, but found unexpected talent in onlooker Cinderella. As Cinderella, Pineiro was simultaneously sweet but defiant, a playful dreamer but also a despondent realist.

Once the Fairy Godmother (Elizabeth Wallace) transforms the kitchen into a forest glade, the magic truly begins. Wallace was radiant and ethereal, joined by Dragonflies Harrison Monaco, Michael Holden, Jack Thomas, and Aleksey Babayev. As the Spring Fairy, Misa Kasamatsu danced with cheerful buoyancy although there seemed to be a slight stumble on an exiting lift by one of the Dragonflies. Jacqueline Callahan was a dreamy, languid Summer Fairy; Alexandra Hughes a rather intense and fiery Autumn Fairy; and Marria Cosentino-Chapin a graceful delicate Winter Fairy. Observing from the side, a cloaked Cinderella at some point switches with a cloaked body double in order to make the “magical” change from her tattered clothes to her beautiful pink ball-wear, but at this performance, that transition was not so sneaky. Regardless, when Pineiro threw off the cloak to reveal her glittering garments, the effect was still enchanting. 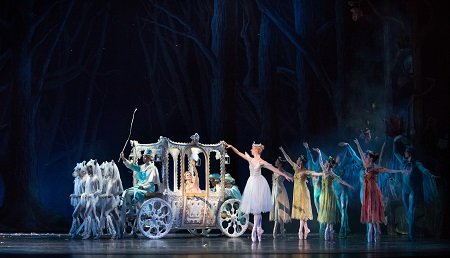 After intermission, Act II opens on a stunning ballroom at the palace. However the scene is nearly stolen by the feisty Jester, performed this afternoon by corps de ballet member (newly promoted from apprentice) Peter Weil. Weil dazzled with soaring leaps in sequences where he seemed to spend more time airborne than the fleeting moments when his feet touched the floor, and with equally spectacular pirouettes. His performance was so remarkable that I momentarily digressed from the current performance to briefly wonder which young talents may take on the role of the Slave in Angel Corella’s upcoming “Le Corsaire” later in the season.

The corps de ballet danced with beautiful synchrony as twelve couples in deep magenta flooded the space, and Ballard and Ducker returned with solos that drew hysterical laughter from both the children and adults in the audience. As expected, Molina Soca as the Prince was regal and majestic, and unleashed his own arsenal of impressive leaps and amazingly well-controlled pirouettes. Pineiro was the princess of every young girl’s dreams – no longer timid or oppressed, she danced with confident grace and elegance. In their pas de deux, Pineiro demonstrated spectacular balance, remaining completely steady and unwavering in arabesque as Molina Soca promenaded around her. Molina Soca’s athleticism was on display with seemingly effortless lifts and transitions, as if Pineiro were weightless. 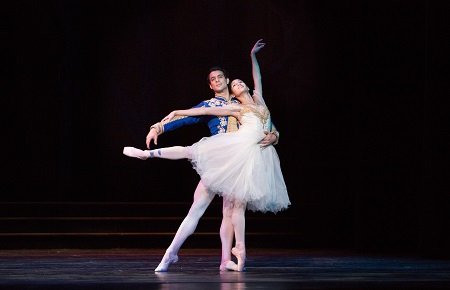 Act III returns to Cinderella’s kitchen where we are treated to a little more comedy from the Stepsisters as they try desperately to fit into the glass slipper, as well as the much anticipated retribution when Cinderella (noticed in the corner by the unsung hero, the Jester) is reluctant to try on the slipper, but is found to have the other slipper and becomes engaged to the Prince. The Stepfamily suddenly repents and is forgiven, Molina Soca and Pineiro share one more romantic and adoring pas de deux, and the curtain falls as the Priest unites and crowns them.

The magic of Cinderella continues until October 23 at the Academy of Music (including several weekend matinees), and the company returns to the Merriam Theater stage in less than a month – from November 10-13 with Revolution, a program including a world premiere from Brian Sanders, The Third Light by David Dawson, and Square Dance by George Balanchine. If today’s performance is any indication, as new faces become more familiar, audiences can continue to look forward to discovering new talent.