Pennsylvania Ballet closed its 2018-2019 season with a selection of three eclectic and iconic pieces highlighting motion and movement. The first selection in today’s series, DGV, was the highlight of the day. The curtain opened on an impressive set that was a trick-of-the-eye. A group of dancers was visible through a screen-like peephole at the bottom of the curtain. The dancers appeared tiny in perspective, as if at-a-distance, and they rhythmically pitched side-to-side in small synchronous movements making the audience perceive we were looking through a window at passengers on a train. This consistent rhythmic motion was a persistent thematic note as the backdrop at various times in today’s performance, a commentary on the inevitable and constant motion of life all around us.

The first full dance motion the audience saw was that of Alexandra Hughes and Jack Thomas as the first featured pas de deux in DGV. Separate curtains opened so that the original group of dancers visible through the peephole window appeared in pulsing synchrony set starkly in contrast against the smooth and passionate movements of Hughes and Thomas who were front and center stage. The costumes, by Jean-Marie Puissant, played nicely on this duo, architectural and nuanced in color to set apart the soloists from the background dancers. The female dancers’ legs were exposed completely such that their musculature was laid bare, highlighting the strength and detail of raw energy required to carry out the elaborate momentum in this piece. Hughes was incredibly passionate and compelling in this role and one only hoped to see more of her.

The subtle lighting by Jennifer Tipton and set design by Puissant, with large metal hardware set to the back of the stage like the top of a train against a shimmering moonlight was truly an awesome way to take the audience through the movements of this piece. As yet another curtain rose to reveal what appeared to be moonlight, a shining bright white light above the still yet dynamic train, the audience was plunged eagerly into three more amazing pas de deux. Alexandra Heier danced a strong pas de deux with Russell Ducker against throngs of motion of the larger group of dancers who entered and departed the stage in expansive movements in perfect unison. Yuka Iseda danced the longest and most powerful pas de deux with Aleksey Babayev. Their romantic and strong interludes almost felt like the audience was watching two lovers in the moonlight alongside the train. Their lifts were perfectly beautiful and haunting in a moment when the mood turned bright blue against them and the music struck suddenly silent for a brief pause as Iseda hung suspended in the air with her legs high, only to move just as quickly back to a movement of breathless longing. Nayara Lopes and Albert Gordon danced the final of the four pas de deux in a rapid motion, bringing the audience spinning along as Lopes twirled and twirled in a fast-paced series of chaine and pique turns interposed with languid extensions and lifts.

DGV was truly an onslaught of movement where the audience was caught surprisingly breathless, as if a high-speed train had just unexpectedly roared past a transfixed passerby standing on a train platform. This was one of the most fearless and impeccable deliveries of choreography yet from the entire group of dancers of Pennsylvania Ballet. This piece was so rich on so many levels in terms of movement, music, lighting and design that the dissection of its various parts almost seems too great. There was truly a secret recipe of magic here, though, because the audience knew they were witness to something great today, even if somewhat indescribable. The extraordinarily impactful presentation of DGV today demonstrated the absolute forte of a group of artists, highlighting individual strengths and coming together as a larger force of nature, greater than the sum of its parts. This is power and this is love. The piece was dynamic and inspiring. The closing moment when the music stopped suddenly and the four featured pairs continued to spin the female dancers in suspension in varied perfect shapes with legs and arms strewn high in the air, like objects blown forcefully and perfectly by the wind in the drift of that train, was exulting and vitally relevant. 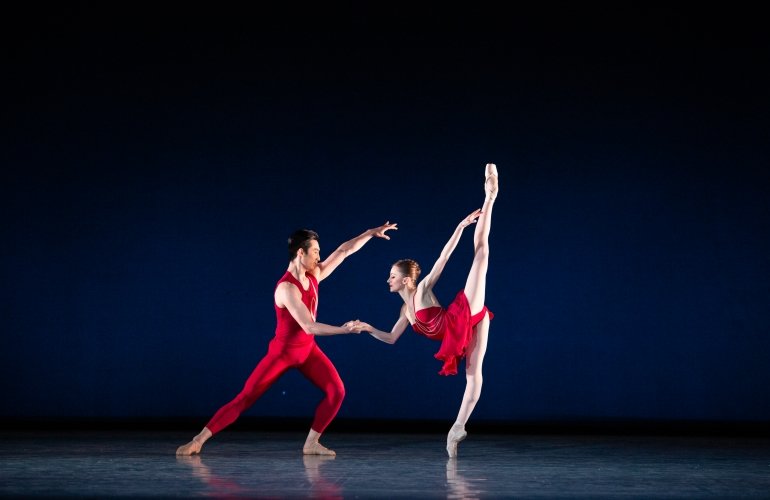 The second selection in today’s performance was Trigger Touch Fade. This piece, a World Premiere choreographed by Jorma Elo, was truly an ode to classical ballet. The dance gracefully transitioned various dancers through varied movements of technically challenging choreography. The dancers wore simple costumes in bright colors matching their partners and groups. Lillian DiPiazza danced a lovely pas de deux with Sterling Baca. Oksana Maslova danced with her usual beautiful acrobatic prowess with partner Zecheng Liang, who was truly the highlight of this piece. His stage presence and jubilation filled the stage and matched his technical and strong technique. Luigi Mazzocchi played the violin solo against which many of the dancers found their musicality. He was exceptional in his performance.

The final selection today was the Company Premiere of Glass Pieces, choreographed by Jerome Robbins for the New York City Ballet in 1983. As germane today as it was then, the piece opens with a thronging crowd of various individuals that appears in bright light to be walking with determination through an urban and sprawling landscape of persistent movement. The set is simple, only a full height backdrop reminiscent of a grid of large-scale graph paper. In the first section of this piece, “Rubric,” three separate duets would break out, each time adding an additional couple. The featured dancers were Lopes, Babayev, Hughes, Thomas, Therese Davis and Pau Pujol. The movements were cool and crisp; an interesting departure amid the inundating pacing crowd on stage.

The second portion of Glass Pieces is “Facades,” where upstage there is another pacing persistent movement, a line of women of dancers, slightly bouncing and walking slowly along the rear of the stage like a rhythmic march to a drumming rhythm. The dancers appear to look at their watches and persist in their unwavering pathway along the back of the stage. Against this monotonous and chilling insistent motion, DiPiazza danced a beautiful and lonesome pas de deux with Ian Hussey. This was one of Hussey’s final featured pas de deux selections in this weekend’s retirement performances. Watching Hussey and DiPiazza dance in beautiful and familiar synchrony against this monotonous marching was comforting and disquieting all at once. Hussey and DiPiazza’s calm partnering in smooth extension and partnership departed just once to break the marching line of dancers as they broke through the line in a singular instance and then simply returned to their own seemingly entirely separate and beautiful dance. 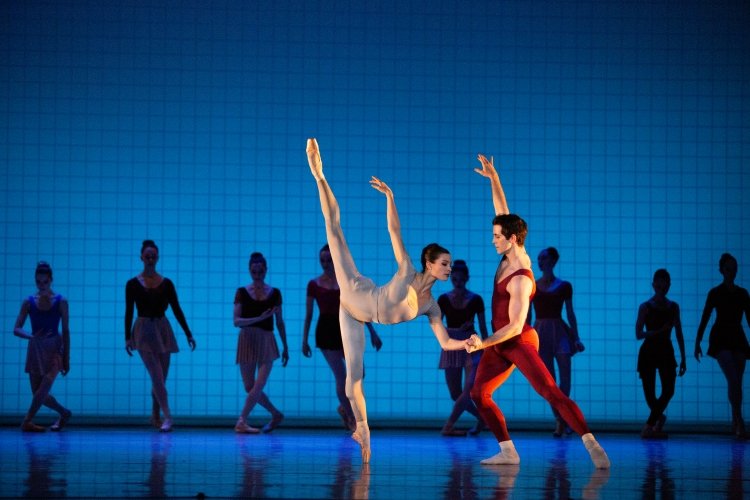 This weekend marks the end of a 24-year relationship with Pennsylvania Ballet, 15 years as a professional for Hussey. His stage presence has been a remarkable and reliable feature for audiences for years. In this final pas de deux, the audience’s gratitude to him was palpable for the brief moment when he broke through the lines of our monotonous lives to witness his grace and gift to the stage in Philadelphia.

In the final section of Glass Pieces, “Akhnaten,” the corps de ballet danced in simultaneously ravenous and pristinely controlled waves of movement. This was a uniquely designed structure where the women and men were divided on sides of the stage in terms of gender but their movements were set in terms of equality and neither was necessarily the stronger or more featured. In closing this season, the power and the potential of what this company can do was splayed open in a sharp silence of a bright white light as the dancers froze in complete unison leaving the audience yearning for a moment more and in anxious anticipation of the 2019-2020 season. 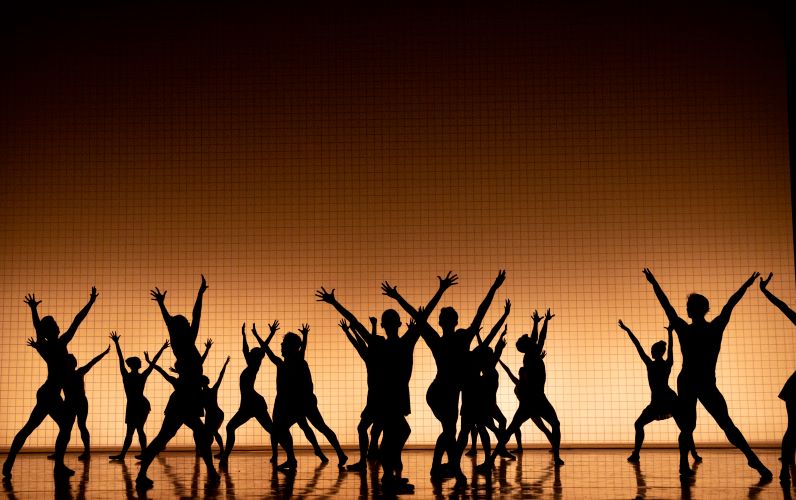