If you have not yet seen Pennsylvania Ballet’s 2019 production of Don Quixote, do not walk to the theater, RUN! Angel Corella’s staging is truly a masterpiece, with every single act a feast of jubilation and artistry that is exactly what we all need right now. Corella has commented that growing up in Barcelona and his history of dancing many times in Miguel de Cervantes’ Don Quixote created an emotional connection that allowed him to create a ballet with an atmosphere that “feels like home.” If this is what “home” feels like, tonight’s audience would have gladly stayed overnight at the Academy of Music and maybe into next week if they could.

The production opens on a dark scrim with the image of a beautiful ghost in a white dress on a balcony waving down below to a sorrowful Don Quixote, danced masterfully by Charles Askegard. The Cervantes quote, “In order to obtain the impossible, one must attempt the absurd” floated in the air in golden light on the dark scrim before floating away as the ballet ensued. Cervantes’ intensely profound maxim characterizes the implausible nature of the feat achieved by the star-crossed lovers in Don Quixote. Mayara Pineiro and Arian Molina Soca embody the youthful and easy exuberance of Kitri and Basilio so well that in their comedic whimsy, one forgets the inhuman level of athleticism and talent required to perform the intense choreography of their roles. By the end of tonight’s production, audience members were literally shouting from the balcony, “that was so good!” while Pineiro and Soca were still dancing their final solos.

Every act in Corella’s staging of Don Quixote had special treasures for the audience and each detail of staging, costumes, sets and dancing was meaningful in its beauty. Highlights in Act I included the wonderfully idyllic staging of a town square in La Mancha. The stucco buildings felt authentic and the varied costumes were elaborate, beautiful and genuine to the depiction of the tale. Corella commented that he had traveled to Spain to purchase costumes, and his mother even helped to decorate the bullfighter jackets. Jermel Johnson’s interpretation of Gamache was priceless. His elaborate costume of fanciful pants, jacket and feather-adorned hat with long curled locks of hair were the perfect touch to his comedic attempts to woo Pineiro’s Kitri. The audience guffawed when Don Quixote’s large lance knocked him between the legs and the two suitors vied for the eye of Kitri in a charming comedy of errors.

A less noticed detail of the evening might have been the village children danced by students of The School of Pennsylvania Ballet, but in the midst of a dance of the Seguidilla one little dancer watched in delight with the other dancers and found herself so intoxicated that she began to imitate their movements. Like the audience, she already was feeling a sense of wanting so much to be a part of this celebration. Pineiro and Soca truly captured the audience’s hearts in a lift sequence when he would lift her high in the air and the orchestra would hold in complete silence waiting for her fall, and then suddenly the cymbals would crash. Pineiro had this way of smiling coyly, almost with a wink from high in the air, as she waited for that moment to fall. A gasp ensued from the audience each time Pineiro fell into the most perfect drop.

Lillian DiPiazza and Sterling Baca danced captivating renditions of Mercedes and Espada. DiPiazza’s extensions were beautiful and there was a scintillating movement when her solo of bourrees and turns weaved in and out of a line of beer mugs that matadors had lined the stage with. As she danced, the matadors, danced by Aaron Anker, Cato Berry, Federico D’Ortenzi, Russell Ducker, Austin Eyler and Pau Pujol, snapped their fingers around her creating a dynamic landscape of sound and movement. Baca’s costume was a showpiece of white with gold and red details and he used a white cape, with a red underside, which he artfully guided as a prop, twisting and twirling as he danced through a series of powerful jumps and turns. All of these movements created an atmosphere reminiscent of the bullfights in Spain, and DiPiazza’s austere and beautiful Mercedes was a worthy match for the power of Baca’s Espada.

Act II shifted the entire movement of Don Quixote to a Gypsy Camp. The sets were exquisite with an elaborate windmill in the background and an enormous appearance of a burning fire. Nayara Lopes danced the opening solo; she was fluid and inviting in her interpretation of the gypsy. Her flowing purple dress and white shawl matched her long wavy hair which flew with her through the air. She set the perfectly Bohemian movement of this act, welcoming the audience and the band of gypsies to come along. Zecheng Liang defined himself yet again as a force among the dancers of Pennsylvania Ballet with a natural and pristine series of grand jete en tournant and incredible pirouettes. In this act, the stage became filled with so much lush movement that it was difficult to focus on one dancer, but it was clearly a piece of raucous wonder, which no one wanted to look away from. Patricio Acevedo on the guitar and Arturo Stable on the cajon were details that were worth noticing because they added an element of authenticity to the music, as if the audience were around the fire enjoying this night of delights with the gypsies.

In Don Quixote’s dream, Kathryn Manger’s Amor was dainty and sweet, yet mischievous, and her capacity to fulfill this intricate choreography while portraying this difficult character was astounding. Her interplay with Askegard’s Don Quixote when she would figuratively shoot an arrow into his heart while performing an impervious series of bourrees and petite jete was astonishing. If Corella’s Don Quixote were a feast, Manger’s Amor was the meringue sweet of the entire production. Oksana Maslova’s Queen of the Dryads was regal and severe but her extensions and her beauty as a dancer are always steadfast. Her fouette turn sequence was, unfailingly, amazing. Pineiro’s appearance in the dream is also exquisite and all of her beauty and capacity as a dancer throughout this production is a delight, leading up to the final act of Don Quixote tonight. The closing scene in Act II with Pineiro and Maslova dancing behind Manger as she shakes her head in a coy “no” while dancing impeccable bourres with a delicate port-de-bras was magical, set against the experienced and talented female corps of Dryads in their gorgeous golden tutus. 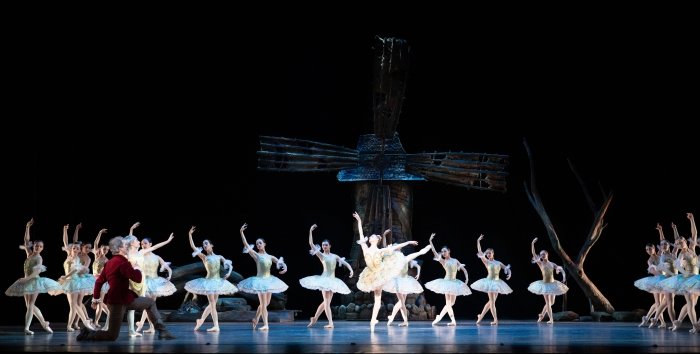 In Act III, the audience returns to a tavern in La Mancha ultimately for the wedding of Kitri and Basilio. The scene is intoxicating with Basilio convincing the dancers on stage that he has killed himself with a blade; meanwhile, he and Kitri have already established a relationship with the audience so that we too are part of the game. Askegard’s Don Quixote rises to the occasion and convinces Lorenzo, danced artfully by Jon Martin, to allow it, and the audience rejoices when Basilio bounds to his feet and he and Kitri are able to marry. The audience truly participated in this evening’s production as if we were invited to the wedding, clapping joyfully in rhythm to the final selection of music as the confetti fell on the wedding party.

The wedding pas-de-deux between Pineiro and Soca may be one of the greatest current masterpieces in ballet history staged. Pineiro is unequalled in her delivery of this elaborate and intricate classic choreography. She is delightful in her coy, happy and effortless presentation of Kitri’s classic solo. Pineiro is a rare gift to the city of Philadelphia and it would be unfortunate to miss an opportunity to see such greatness in our midst. Watching her is like looking through a keyhole into a magical world of what could be if someone with an intangible skill is placed in a wonderful earthly circumstance, almost as if for a moment, we are in her wonderland, a most enchanted place to be. Soca’s solo was also wonderful; his pirouettes and grand jetes were brilliant. Pineiro and Soca are a wonderful match and their youthful exuberance required to achieve the impossible by attempting something absurd is inspiring in ways we do not see every day. Who wouldn’t want to see this, and to remember that maybe you should try it too?