One day before Angel Corella’s 2020 interpretation of La Bayadere opened on the stage at the Academy of Music in Philadelphia, The Philadelphia Inquirer published a piece describing the intentional efforts that Corella made to distill some of the most controversial portions of the story’s presentation and “erase stereotypes” from his rendition. Following opening night, The Inquirer published a follow up article describing how despite Corella’s efforts, “stereotypes persist” in the production. The magnitude of Corella’s efforts and Ellen Dunkel’s coverage of the important conversation surrounding art of older eras which we have come to understand is culturally offensive cannot be understated. The significance of La Bayadere in the history of dance and the sensitive process with which a reproduction of it must be undertaken in the current age is vital. Corella’s efforts to extract cultural misappropriation for the sake of art embodies a mindfulness that all creative directors should emulate. One must be cautious about completely dismantling iconic historical art which has value, acknowledging the existence of offenses and finding thoughtful ways to uncover and reinterpret details which are stereotypical and misleading.

The overture of La Bayadere opened on a full-size tapestry covering the height and breadth of the stage, depicting a large elephant with a rider in a howdah and the year 1877 printed at the top. As the orchestra of Pennsylvania Ballet played, the lighting darkened slightly and words appeared on the tapestry describing the actions that would occur in this first movement of the story. This introduction replayed with each movement of the tale orienting the audience to the actions of the story. This was a very engaging feeling of watching a vintage silent movie of sorts, as if the reels of film were being changed and the story was presented like a vicarious experience of sitting in an old movie theater. Somehow this interpretation acclimated the audience to a sense that we were watching a piece told from the perspective of storytellers of a different era and some of the details might not fit the way we would tell the story the same way today, as Corella described, “in no way evocative of authentic Indian culture” but a “dramatic fantastical story.” 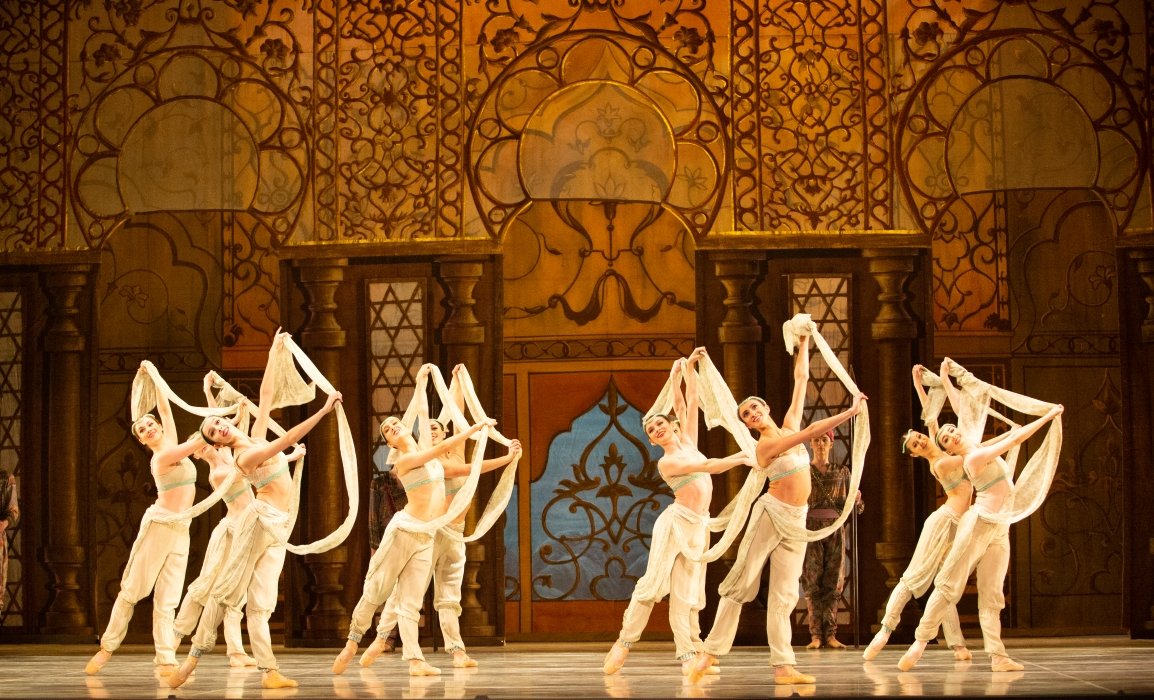 The opening scene of La Bayadere centered on the consecration of Nikiya as the lead temple dancer at the Temple in the Sacred Forest. Charles Askegard danced the role of the dark Brahmin displaying a foreboding fury at Nikiya’s rejection of his love. In this movement, eight female dancers of Pennsylvania Ballet perform as the other temple dancers. Pallabi Chakravorty, one of Corella’s consultants for his reinterpretation of La Bayadere, commented about how temple dancers have either been erased from history or degraded as prostitutes. In striking contrast to most of the costumes for the female dancers in La Bayadere, the temple dancers’ dresses cover their bodies completely in a sparkling silver blue top and essentially full-length skirt. Their dance is delicate and lovely as they surround the fire in the pit.

In 2015, The New York Times published an article entitled, Sashimi Devi, Last of India’s Jagannath Temple Dancers, Dies at 92. The article described how many temple dancers were from poor families and initiated into temple service at age 7 or 8. Over the years, public opinion turned against the practice of temple dancing, which exposed young women from lower-caste families to sexual exploitation. The reality of this historical element underlies the sorrowful tale of Nikiya, whose life is dictated by her social stratification and gender inequality which persists even today, creating scenarios of sexual vulnerability and obstacles to freedom of choice in whatever country and culture a woman resides. Corella’s decision to flay this message before us is powerful and intentional. Even if each detail in his reinterpretation is not perfect in removing every stereotype, La Bayadere is a story that should not be forgotten or hidden from audiences and Corella’s special considerations make the audience look twice and think thrice about the weight of the story we are watching. 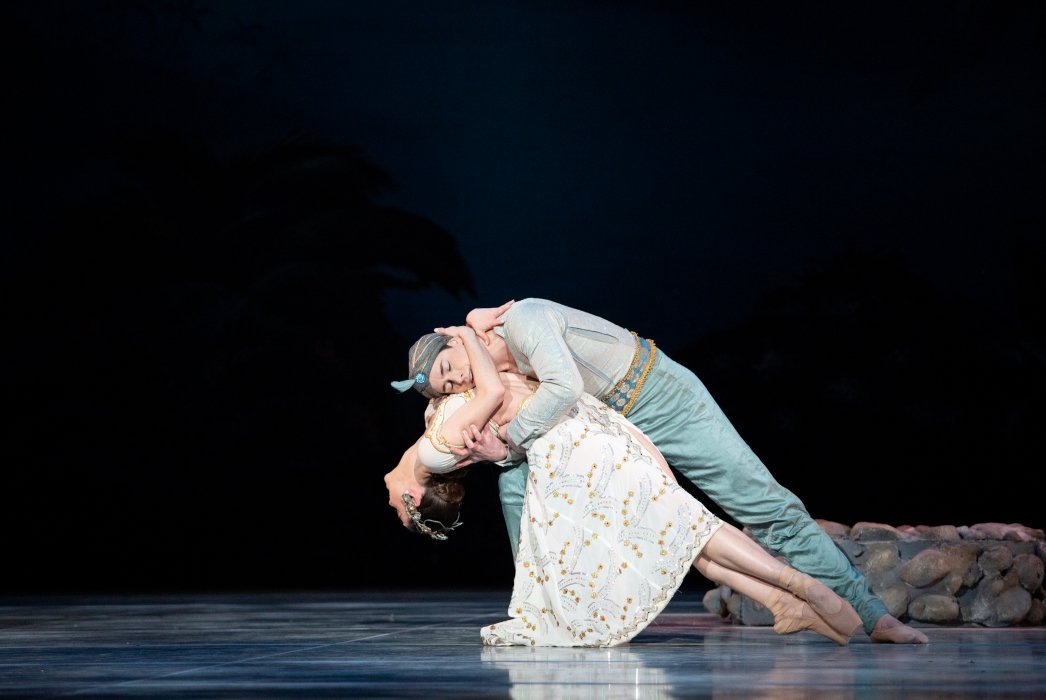 Dayesi Torriente danced the role of Nikiya in this evening’s production. Her entrance from the temple onto the stage under her airy veil was intriguing and delightful. Her first pas de deux with Solor, danced by Sterling Baca, was convivial and technically spectacular. Baca is an exceptional partner, reading Torriente’s signals well, ensuring every lift and extension were carried off seamlessly. Torriente’s interpretation of Nikiya’s solo at the engagement party of Solor and Gamzatti was exotic and pretty but full of a foreshadowing despair. Torriente and Baca’s dancing seemed to rise in passion and delivery and climax in the Kingdom of the Shades. Torriente and Baca both carried out impressive grand jete and fouette sequences throughout the acts in tonight’s performance. In the final large-sequence portions of their pas de deux, Torriente’s outstretched leg could be seen to quiver slightly in her highly extended developpe a la seconde, and somehow that quiver lended an authenticity to the energy and the power behind the tragedy of the tale of Nikiya. 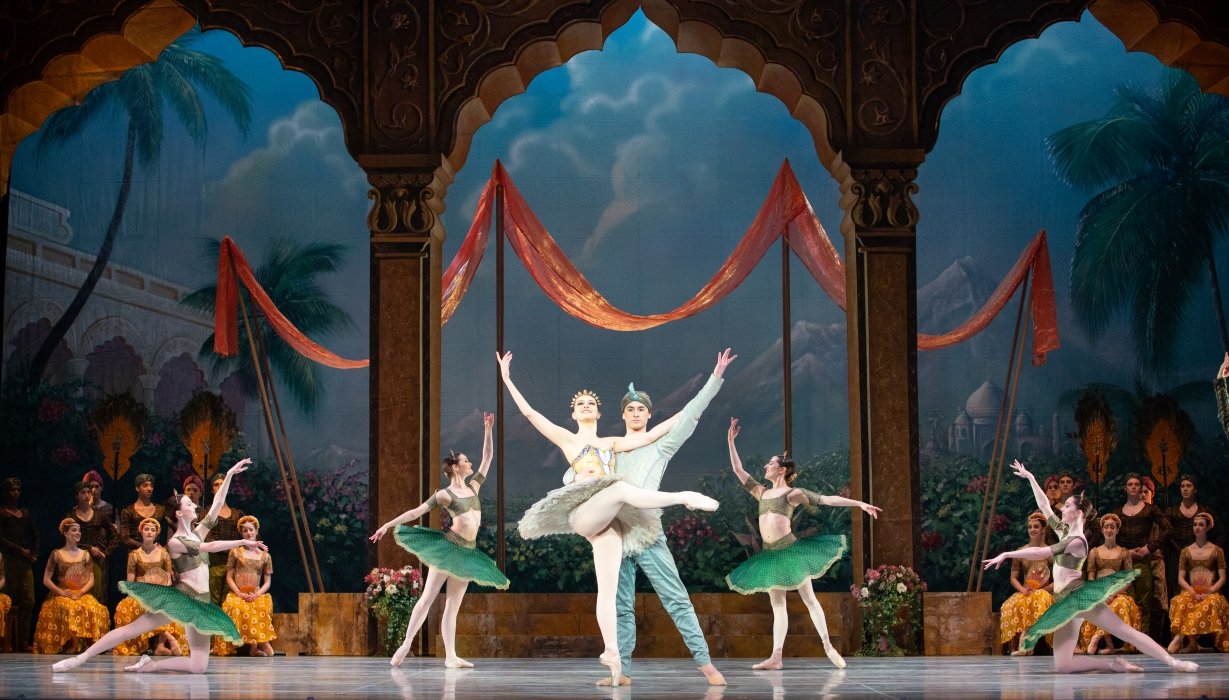 Sydney Dolan’s performance as Gamzatti was a highlight of tonight’s production as well. As the curtain closed on her in the great hall after her argument with Nikiya, her austerity and anger were palpable and truly chilling as the scene ended on her righteous intention for vengeance upon Nikiya. Her solo in the engagement party scene was delightful and she was an exuberant performer. In keeping with the feeling of watching a vintage silent movie, Dolan had a sort of music-box-ballerina quality to her reminiscent of dancers like Anna Pavlova and Margot Fonteyn. Her attitude turn sequence was light and precise. Her pas de deux with Baca was also notable and they paired well. Ashton Roxander’s rendition of the Bronze Idol was excellent. He maintained the persona of a statue while dancing and somehow inexplicably managed the most precise series of jumps and turns, striking every landing and shape with perfect accuracy.

In truth, the most powerful portion of La Bayadere was the corps’ presentation of the Kingdom of Shades. There was something excruciatingly intoxicating in watching this movement; a methodical beauty to the lengthy entrance of the 24 dancers as they painstakingly repeat a series of arabesques, tendu en avant, over and over again until all of the dancers were on stage together. The movement conjured John Donne’s poem: “send not to know / for whom the bell tolls / It tolls for thee,” though no bell was heard to toll in this piece. The corps was breathtaking in every single step of this choreography. When they bourreed in fifth position simultaneously in formation with their arms gently outstretched to the sides, white tutus lightly bobbing, with their faces and necks stone cold as statues, one was simultaneously haunted and intrigued. This piece was truly a work of art. 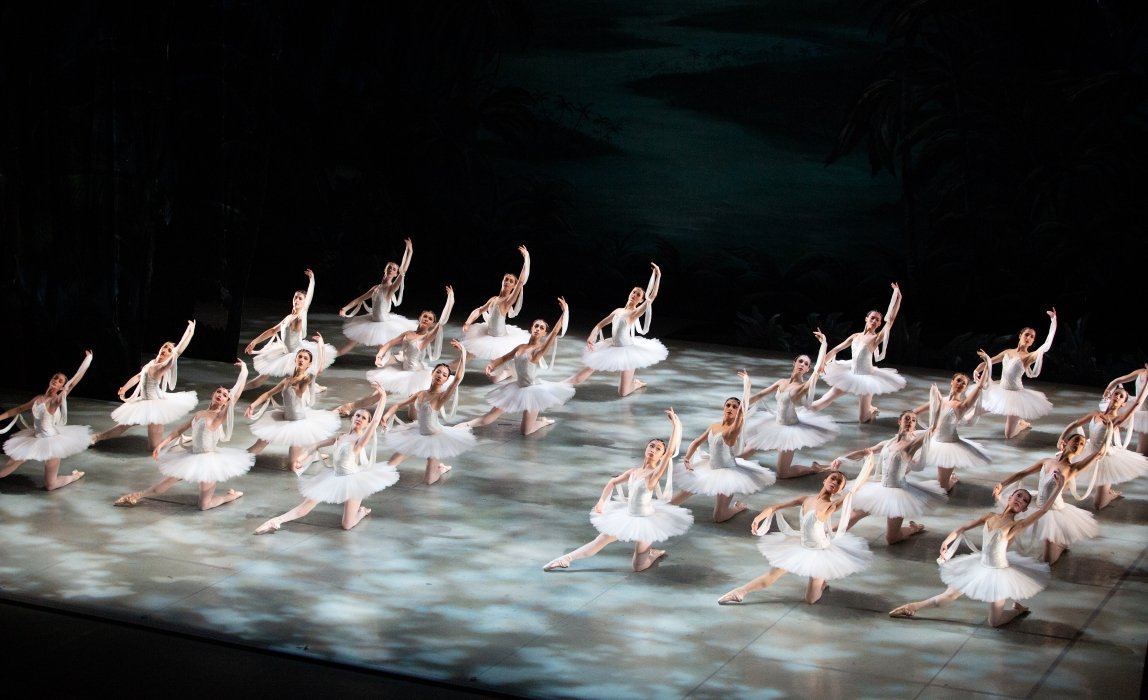 Kathryn Manger danced brightly as Shade 1 in a solo that seemed ready-made for her, with perfect jumps and fast graceful sautes en pointe. Alexandra Hughes and Oksana Maslova rounded out this pristine piece as Shades 2 and 3 and were wonderful, as usual. Torriente and Baca’s final pas de deux in the Kingdom of Shades moved through a series of pirouettes for Torriente as they each held onto a long white drape as Baca moved it up and down to facilitate her turns. This was strikingly beautiful in their graceful connection to one another.

La Bayadere ended as Solor drank arsenic so that he could join Nikiya in the Kingdom of Shades. The audience could see wafts of white clouds descending behind the scrim as Baca appeared to join Torriente dancing into the distance holding the long white shroud together. The despair of the tale of Nikiya resides in the truth that death is the only equalizer and the afterlife is where Solor and Nikiya are free to be together, unabated by the earthly attachments that restricted them. This is a truth that portends importance in so many literary and artistic references throughout the ages. While La Bayadere is a controversial production to this day, the universal truth of the need to dismantle stereotypes and the significance of social stratification in dictating fate are as important today as they were when this story was first told. If it requires careful attention to detail to ensure it stays relevant, then that is what we need to do, for this and every story that lends an important message to our truth as a species.

Corella has selected a number of other classic ballet stories for Pennsylvania Ballet 2020-2021 season and one can imagine we can look forward to some interesting modifications to these as well.