Angel Corella wasted no time in transporting this evening’s Philadelphia audience to the tumultuous high seas in his Le Corsaire world premiere. The production opened on spectacularly staged special effects, shifting gradually from the image of languidly dancing clouds in a dark sky, to the spectacle of an impressive pirate ship in the distance moving through waves of dark water. With an exciting flourish, the curtain opens shortly after on a surprisingly life-like bazaar where Lankendem, a Trader, danced powerfully by Ian Hussey, presents his various wares, including captive women. 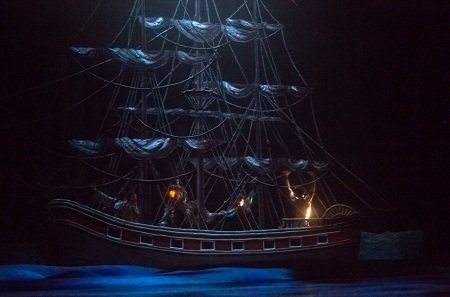 The rich splendor of the golden seaside village sets and the gorgeous and elaborate jeweled tones of the women’s exotic attire thrilled the audience, creating a seamless sense of participation and invitation into this raucous scene. Mayara Pineiro danced the role of Medora, a Beautiful Harem Girl, and the most stunning of Lankendem’s treasures. In her signature effortless and playful movement, Pineiro convincingly entrances the participants of the bazaar as well as the audience to quickly recognize her as the most special of treasures.

Aleksey Babayev’s entrance as Conrad, a Pirate Captain, was the most momentous explosion in the onslaught of movement and excitement in the bazaar. Babayev’s powerful jumps were accompanied by his gigantic smile, filling the stage with a sense of extravagant celebration. The brief interlude of romance between Babayev’s Conrad and Pineiro’s Medora was enrapturing and playful, leaving the audience thirsting for occasion to see them dance together again. Hussey’s Lankendem forcefully removed Medora, his property, from her independent love affair with Conrad and placed her in captivity behind his team of guards.

The adventurous story of Le Corsaire moved rapidly in Act I, at times barely leaving time for the audience to catch their breath in between the fast-paced and dramatic story-line. The Pasha, played by Jon Martin, entered the scene with an entourage of assistants dressed in golden, purple and jeweled hues, to negotiate purchases with Lankendem.

Alexandra Hughes danced the role of Gulnare, Medora’s Friend, the first woman that Lankendem presents for sale to the Pasha. Hughes’ first solo was enchanting and mysterious as she danced with a soft veil of fabric covering her face; her movements created a riveting sense of her being pulled into a painful sale to the Pasha. Hughes’ turquoise, red and gold tutu, bodice and crown were opulent and vibrant; the impeccable costuming here creating the essence of a treasured ware being presented at its loveliest for sale. Hughes completed a lovely series of fouettes and pirouettes amidst her human tragedy.
Hussey’s Trader was persuasively cocky and lively about his sales and moved onto his presentation of Medora. As painstaking as Gulnare’s sale was, Medora’s sale is a dichotomously playful, flirtatious and enjoyable show by Medora for the Pasha. Pineiro’s dance for the Pasha is strikingly perfect with impeccable precision and divine extensions. The audience is so entranced by the story that one briefly forgot the artistry involved in making a story told so perfectly with simply the purity of expression through movement matched with flawless musicality.

No sooner is Medora taken away than Conrad and his compatriots – Birbanto, danced by Craig Wasserman, and Ali, danced by Arian Molina Soca – make a decision to rescue her. The scene rapidly moves into an upheaval and raid by a league of swarthy pirates, danced by Artists of the Pennsylvania Ballet. The corps work here was great fun to watch. Therese Davis danced an entertaining rendition as the Pirate Woman with Wasserman’s Birbanto. One almost did not want to blink as suddenly Medora has been rescued and the scene quickly closed, leaving audience members breathless with excitement and perhaps a need to catch up to everything that has happened already by the end of Act I in this fast-paced tale of romance and exploit.

Act II opened on The Grotto where Conrad and Medora have fled for safety. If one felt a sense of breathlessness and awe by the end of Act I of Le Corsaire this evening, Act II would irrefutably escalate the exhilaration of this production beyond question. The Grotto set is a huge inner aspect of a cave, complete with the impression of damp stone walls, pillars and stalactites, which glisten with the appearance of jewels buried there from top to bottom.

Molina Soca as Ali presents Pineiro as Medora, now in a stunning white and shimmering tutu, bodice and crown, to Conrad here amongst the band of pirates. Soca, Babayev and Pineiro dance together here and the effect is absolutely exhilarating; their partnering, jumps and turns were perfection and adrenaline-charged for everyone in the audience, creating eruptions of cheers and applause throughout their performance. There were so many moments of shock and disbelief as audience members gasped at the artistic acrobatics entwined in seamlessly precise technique. These three dancers were a powerhouse of presence, joy and talent whose movements and elation emanated into every corner of the stage and theater.

The story in Act II progresses through an argument between Conrad and Birbanto about whether or not to release the women the Pirates have been holding captive after Medora convinces Conrad to set them free. There is a boisterous sword fight and Wasserman’s Birbanto dances again with Davis’ Pirate Woman in a playful scene of pirate celebration as Birbanto deviously plots to give Conrad a rose with sleeping potion on it.

Pineiro and Babayev perform another pas de deux and just when the audience thought things could not become more exciting, these two create an athletic and elegant series of gravity-defying moments of strength and grace where Babayev lifts Pineiro with her hands on his shoulders; she holds one leg extended up to the sky and extends the other to meet it in an acrobatic upside-down fifth position. These were collective moments of disbelief for the audience because these lifts were so impressively implausible, yet Pineiro and Babayev were happy and smiling and making each moment of this dance look like they are two children enjoying a jubilant ride on a swing set at the playground. Following this astounding pas de deux, Medora mistakenly gives Conrad the rose and he falls into a drugged sleep in a moment reminiscent of Shakespearean Romeo and Juliet, Birbanto returns to try and kill Conrad in his sleep and the corrupt Trader Lankendem has a moment to swoop in and return Medora to the Pasha, her rightful owner.

Act III opens at The Pasha’s Palace, more scenery of intricate and plush details, where Lankendem returns Medora to the Pasha. In this scene, Hughes’ Gulnare, entertains the guests with a nice solo. Lankendem offers three Odalisque maidens, adequately danced by Kathryn Manger, So Jung Shin and Nayara Lopes. The Pasha sleeps after this party dreaming of his wedding to Medora. In the Pasha’s wedding dreams, Hughes directs the beautiful wedding party, dancing a beautiful solo with lovely extensions and turns and nice interplay with the corps of adults and eight young Students of The School of Pennsylvania Ballet.

Hughes danced well here and appears to definitely be finding herself in this highlighted role among the dancers of Pennsylvania Ballet this evening. The floral costumes of the corps and the young dancers here were delicate and well developed. Pineiro enters the dream sequence in an amazing gold tutu and bodice and dances a weaving pointe sequence over the hoops of flowers in front of the amazing formations of the corps and the young children.

The Pasha awakens to encroachment into his palace by Conrad, Birbanto and their pirates disguised as travelers. More excitement ensues as Conrad and Ali rescue Medora and Gulnare from the Pasha and their captivity. The production closes with the same creative scenery of the pirate ship at sea with its now recognizable passengers in the distance. In terms of setting, this one final moment did not seem to translate as readily as all other moments in this adventurous tale; there is an apparent storm at sea and the production closes with the only survivors, Conrad and Medora, clinging to each other, washed ashore on a dark rock, which looks more like stone steps. This was an interestingly anticlimactic ending in terms of closing a production with such impeccable power throughout.

In all, Le Corsaire was a graceful, riveting and explosive onslaught of power and artistry demonstrating the amazing potential dance has as a language. The night closed with the dancers bowing and curtseying to ongoing rounds of applause as the audience longed for one more moment of this magic. I cannot wait to see what comes next from Pennsylvania Ballet this season.