This month’s program by Pennsylvania Ballet was a selection of insightfully selected works choreographed by various artists. This was a dramatic and refreshing shift from the recently captivating and classic full-length production of Romeo and Juliet, demonstrating the breadth and depth of Pennsylvania Ballet’s ability to exquisitely capture the beauty of dance in so many of its facets. Each innovative piece was scintillating in its own right, but somehow seemed intricately tied to the others in a flawless and insightful web of human experience where the dancers were the instruments that compelled the story.

Petite Mort, choreographed by Jiri Kylian, to two of Mozart’s most famous and intentionally very different piano concertos, opened today’s production. Pennsylvania Ballet previously performed Petite Mort in 2014, but this year’s production was haunting and thrilling in a nuanced and exciting way. The delivery of every moment of choreography as well as the lighting and set design were so impeccable that one was able to concentrate completely on the vision of the dance itself. Like the other selections today, Petite Mort served less to highlight the individual talents of each featured dancer and more to showcase the impeccable power Pennsylvania Ballet currently holds as an instrument of artistic voice and insight. 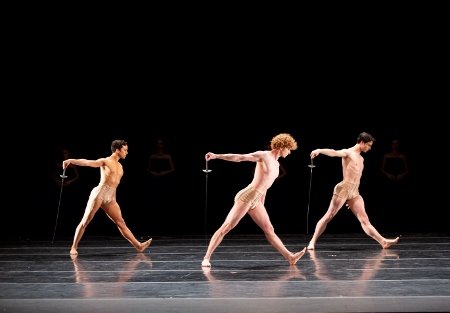 Petite Mort opened on six male dancers, Peter Weil, Federico D’Ortenzi, Jack Sprance, Russell Ducker, Etienne Diaz, and Aleksey Babayev, in minimalist costume of gold shorts, barefoot and holding a sword. The sound of the swords whipping through the air in harmonious synchrony was impressive in its austerity against the sound of silence and then thunder. When the male dancers pulled a giant black curtain to cover the entire stage and then flip it over, while the women – Kathryn Manger, Alexandra Heier, So Jung Shin, Yuka Iseda, Thays Golz, and Ana Calderon – who had been standing stiffly in what appeared to be full strapless black dresses appeared out from under the flipping curtain in matching nude minimalist costumes, it was an extraordinarily powerful uncovering or laying bare of all of the dancers on stage. The sinewy muscular shapes of the dancers bare legs, arms and feet seemed beautifully and intimately exposed, but with a distinct reverence to their strength in a unique way which spoke most to the quality and the cohesiveness of this group of dancers in their force, talent, and relationship. 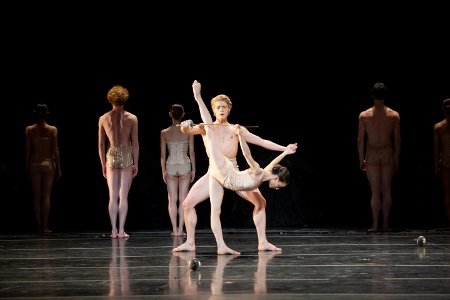 The dancer who seemed to draw the eye most readily today in Petite Mort was Kathryn Manger. Though petite, her stage presence continues to grow in each production where she is featured. She fills the space with her authenticity, enthusiasm, and precision of craft. Her legs and feet were exquisite as she was lifted into the first of many acrobatic lifts by her partner, Peter Weil. When Manger and Weil danced their pas de deux, one could feel the audience holding their breath as he manipulated the sword around her, for fear she would be injured or risk loss of limb with it so close to her beautiful legs and feet lifted high in extension. 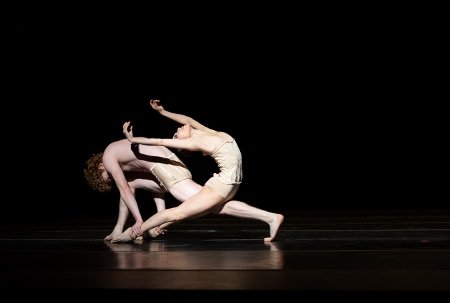 Ducker and Iseda danced an intriguing pas de deux with an impressive process of intertwining movements. Calderon captured another breath-holding moment from the audience as Babayev tipped her straight backwards and she balanced precipitously on his thigh by holding on with her straight legs alone, no other body parts touched. Overall, this group of dancers was simply incredible in their interpretation of Petite Mort. The stripping away, laying bare of the dancers created a perfectly vulnerable moment of transition to the second selection today, Evenings. 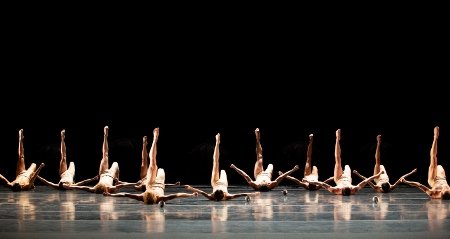 Evenings, a world premiere choreographed by Andrea Miller, shifted the audience into an eerily dark and quiet space with a dimly lit, black flowing curtain as the backdrop creating an aesthetic of a windy night. The curtain opened with the sound of a clock tower bell tolling on this backdrop of night matched by the haunting music by Arvo Part. Ian Hussey’s prowess in opening this piece dancing in solitude and leading the troupe of six dancers, including Jermel Johnson, Oksana Maslova, Albert Gordon, Kathryn Manger and So Jung Shin, was at once peaceful and foreboding. 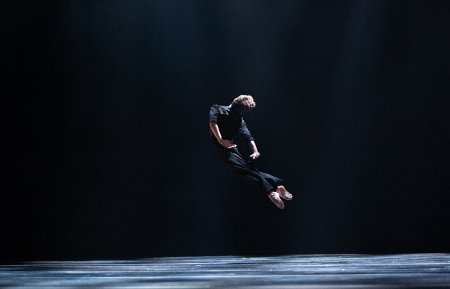 Miller’s choreography created an initial image of constant movement of men and women in dark flowing clothing and dresses that matched the movement of the backdrop. At times the stage appeared so dark that the dancers were more like shadows and the moving images reminiscent of what one might see looking out the window at night and questioning the shapes that appeared to us in our mind’s eye as the wind blows the trees and the world around us. The ensemble dancing was intensely beautiful and dark, stirring feelings of fear, loss, and sadness. The initial movement ended with all of them walking rapidly within their own individual circles while synchronously moving their arms through shapes as if they are trying to hold something to their ear to hear it, then moving their arms up to the sky and ultimately creating a movement with the hands of a pounding heart at the chest until they came to rest at the front of the stage looking out at the audience. The curtain closed on this quiet and deeply powerful moment of each person experiencing these emotions in their own space yet moving in complete synchrony reflecting the commonality of pain for every person. 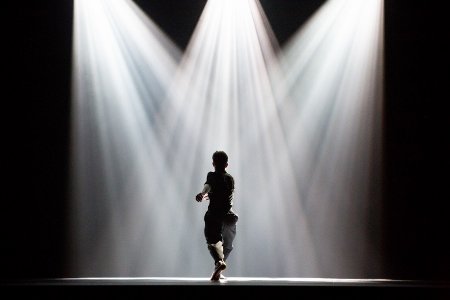 Gordon performed an intensely dramatic solo in Evenings. The curtain opened on him seemingly standing on his head with his legs awkwardly lifted into the air with one arm outstretched and the other periodically banging the floor as if trying to right himself and keep from falling. This moment lingered for an intentionally uncomfortable period as the audience could be felt to struggle with him in his efforts to find his way into a less cumbersome physical predicament. His entire solo was very moving, shifting from moments of smooth movement to awkwardly painful moments when his body took on odd configurations. Johnson and Maslova danced a gripping pas de deux as well, with a poignant movement in closure when she seemed to crawl under his open legs like a person trying to hide in a small cave. 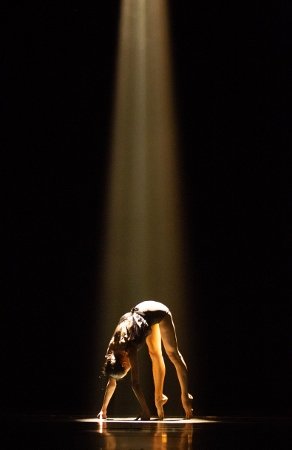 So Jung Shin performed the most intimate and brutally unsettling solo in Evenings. Her solo opened with her lying on the floor in a spotlight trying to crawl her way to standing which she managed to do on the very tips of her barefoot toes. Her interpretation of this piece was beautifully tragic and one found oneself hoping for her to find the strength to stand and dance on her own, only to see her repeatedly fall. Each time, just as she seemed about to hit the ground, Hussey would appear for just a moment on stage to lift her back to try and start again. This solo was a moving piece of beautiful tragedy expressed through a human body, and Shin’s interpretation was impeccable.

The entire group of dancers created a chilling end to Evenings as they danced synchronously to close the piece. Momentarily Manger broke off from the group and moved through a series of motions as she walked in rapid circles, moving her hands to listen in her ears, pound on her heart and then dramatically look like she was trying to suffocate something or close a hard box to aggressively hide something away. She rejoined the group that ultimately moved towards the audience creating movement reminiscent of rocking a baby with their arms, then holding something to the sky and then stopping completely in a shroud of smoke and darkness. Evenings was intensely powerful in its invitation of being lulled into participating in this dark and inevitable heart wrenching sadness. The powerful moments of watching someone in so much pain and despair that they are unable to stand or right their own path were universal in their ability to reach every audience member and the dancers perfectly presented the beauty in the intimate pain and awkwardness of battling forces over which we have no control.

The most startling moment in the production was the sudden shift into the third and final selection, the world premiere of The Divide, choreographed by Corps de Ballet member Russell Ducker. The audience was resting comfortably in the sadness and morose tone of Evenings when all of a sudden the curtain opened on Mayara Pineiro standing at a the top of a lone staircase in the dark, in a dark leotard and in pointe shoes, smiling enticingly at the audience with a bright light shining on her and an open bright white door in complete silence. Her facial expression was at once mischievous and adorably devious; she knew something the rest of us did not. 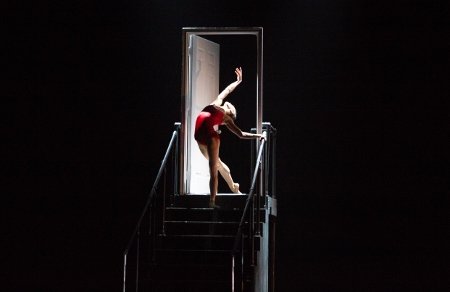 All of a sudden with a loud “BANG” the door slammed shut and catapulted the audience into an entirely different space of energy from the first two selections. This moment in and of itself was worth the price of the ticket today. The build up through the first two pieces and the utter shock here was awesome in the effect it had, of carrying the audience through this process of being thrown into these different moments of human experience without choice. In a quick-paced and constantly moving piece of choreography, set to music by Glenn Branca, the audience watched the dynamic movement of the staircase all over the stage as the dancers on each side of the door struggled to become acquainted with one another. 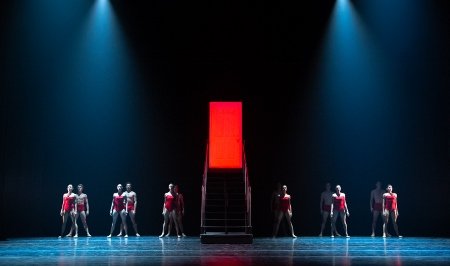 Zecheng Liang, Ashton Roxander, Lillian DiPiazza, Sterling Baca, and Pineiro held the showcased roles in The Divide, and their talents were set to be higher and separated from the onslaught of movement that transpired in this frenetic and fast paced piece. Liang and Roxander had some very athletic interplay with expansive jumps as they led each group of dancers from each side of the door in their processes of encountering one another. DiPiazza showcased herself in her precise and pretty technique. True-to-form, Pineiro was the shining star on stage. Pineiro’s technique is always exact and perfect, but it is her strength and her enjoyment of her process as a performer, which draws the eye and always captures attention. Ducker’s choreography was truly packed with so much movement that it was challenging to know where to look at times. Ducker’s refreshing new voice as a choreographer was welcomed today; his landscape and the support of this group of dancers, who he appropriately highlighted and challenged, clearly reflect an awesome space for his creative process to take place.

In every facet of today’s performance – the dancing, effects, structure of the performance, and the snapshots of the human story, which this impressive group was able to portray – Pennsylvania Ballet took the audience to places it has not been before. Every audience member was invited into the narrative and in some moments, might even have drowned in its emotional grasp, only to be ripped back to the ground with a rush of oxygen. The pieces selected and choreographed for this production were groundbreaking, meaningful, and provocative; showcasing the limitless opportunity in artistic innovation Pennsylvania Ballet is capable of. The company is a powerful tool as an artist’s canvas and the creative spark in the air there is truly electric, leaving the audience inspired and longing for more.