The Academy of Music
Philadelphia, Pennsylvania

Ethereal photographs of Elizabeth Wallace in arabesque peppered bus stops and billboards all over the city of Philadelphia leading up to this weekend’s presentation of A Program of Firsts. Even for viewers who had seen The Pennsylvania Ballet’s rendition of George Balanchine’s Serenade previously, the images of Wallace were so evocative that one pondered what ballet the photograph envisioned. The curtain opened tonight to a corps of ballerinas in white leotards and white tutus, bringing a vision of the white embossed on Wallace’s figure on the billboards across the city of Philadelphia, immediately to mind. The dancers stood with one outstretched arm against a blue backdrop in the first piece of tonight’s selections, Serenade. Wallace was seen at the front of the corps throughout tonight’s performance leading a corps of dancers that worked seamlessly together. Throughout the piece, the corps demonstrated precision in the intricacies and nuances of a team of ballerinas working cohesively to present a piece as delightful as a rolling stream glistening in the sunlight.

Serenade, a Balanchine classic, has been a previous favorite for The Pennsylvania Ballet, and the corps’ experience and knowledge of the piece truly shone tonight. A highlight of tonight’s production was the interweaving diagonals of dancers led by Mayara Pineiro in a beautiful sequence of turns and arabesques, almost appearing like she was sewing a seam of dancers together as she moved downstage. The harmonious corps work was a spectacle of The Pennsylvania Ballet at its best in classical ballet presentation and received the audience’s applause throughout tonight’s performance.

Mayara Pineiro was highly featured in Serenade this evening. She was truly languid and dynamic. She was a pleasure to watch in her execution of extensions and fluid turns. She had no missteps and performed well in her lovely classical leap sequences, pointe work and fluid port de bras. Pineiro led a quintet of ballerinas, including Laura Bowman, Holly Lyn Fusco, Evelyn Kocak and Sarah Gabrielle Ryan. The dancer’s footwork was lovely and their movement effortless together. Their intertwining arms and beautiful port de bras was reminiscent of branches of trees in the moonlight.

Oksana Maslova was highlighted in Serenade this evening as well. Her fragility and dramatically petite frame was a stark presence on stage set against the other dancers of The Pennsylvania Ballet. Lillian DiPiazza performed well in a duet with Aaron Anker. Their performance of the technique was good and they presented amazing lifts and well-executed partnering. DiPiazza, Maslova and Pineiro danced the most touching piece of Serenade with Arian Molina Soca. Soca invisibly spun Maslova’s standing leg from under her tutu as she held an arabesque with her leg outstretched, like a music-box ballerina, above a fallen DiPiazza. The three female dancers fared well in the piece with Soca, though this particular rendition was one of the less heart-rending presentations of this movement of Serenade by The Pennsylvania Ballet and felt a bit like stock repertoire. 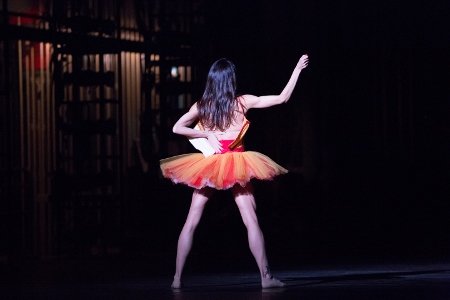 The second selection and the highlight in tonight’s performance was the world premier of Archiva, choreographed by Matthew Neenan. This piece, which Neenan wrote was intended to appear “as if everything here occurs during a simple daydream,” was ultimately haunting given the recent announcement in the Philadelphia media that forty percent of The Pennsylvania Ballet would not be returning for the 2016-2017 season. The curtain opened on a raw stage backdrop, so the audience could see all of backstage with lighting towers and stone walls. Amy Aldridge lay collapsed on the floor with her hair down and seemed to awaken to find herself alone and in silence in a half opened costume, no tights and soft ballet shoes. She appeared almost like a woman gone mad and in the small details of her undone hair and bodice and her measured moments reaching back to play with the seam of her tutu, one felt a bit like one was watching ‘Alice in Wonderland’ through the looking glass. The piece was clearly choreographed for Aldridge, a master not only of ballet technique, but in her acting of the caricatures of ballet as well.

Aldridge’s chilling performance of this prima ballerina looking on ballets past and the people and dances she has encountered moved from a stark, dark and scary opening to brief, more jovial interludes with other dancers including Francis Veyette, Ian Hussey and James Ihde. In certain moments, these dancers appear to hold strings like she is a puppet, in others they are clinking glasses of congratulations. Aldridge appeared to be watching a rehearsal of Ihde and Hussey who are joined onstage by Lauren Fadeley and Ana Calderon. The costumery of this piece coordinated by Martha Chamberlain, is absolutely exquisite in its detail. Fadeley and Calderon are dressed in leotards, tights, skirts and legwarmers like dancers at class and oddly have tiaras on their heads, like this is the one piece of the actual costume that managed to arrive at a rehearsal. 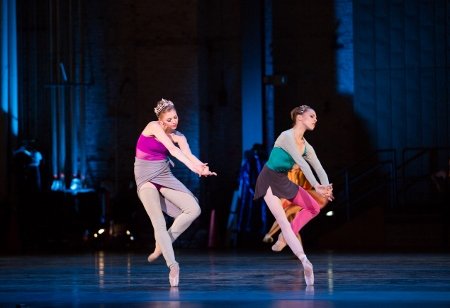 As usual, Fadelely was a darling in tonight’s performance. The eye is immediately drawn to her. She radiates a love and natural exuberance for her art that is unparalleled and makes her a pleasure to watch. Fadeley has become the face of progression and movement in modern American ballet in Philadelphia and has renewed a love for the art among many audience members. She will be a significant loss to The Pennsylvania Ballet in upcoming years. In even her tiniest of movements tonight, as always, there was a dynamism that is rarely captured on stage and I will miss seeing her in Philadelphia.

Oksana Maslova entered in a seemingly threatening role as her character makes Aldridge’s back up onto the stage. In this scene, Aldridge appeared in a blue silk bathrobe with her hair up as if preparing for a performance. Maslova’s costume was a beautiful flowing skirt in a dusky rose hue that was fluid and moved with her throughout her lovely duet with Francis Veyette. One can tell that the choreography was designed with these two dancers in mind. Maslova is an acrobat and her extensions and body seemed to float and fly in a series of lifts that defied gravity. Veyette moved with a certitude that can only come with years of experience in the grace and invisibly scientific physics of lifts and partnering, making the effort appear seamless and easy. In A Program of Firsts, Veyette’s retirement from the company seems a caustic non-first this evening as he shone onstage.

Archiva moved from episodes of cacophonous sound and movement to an energetic and tempestuous series of dancers in various costumes like the archives of a dance studio. Jermel Johnson wowed the audience with his indefatigable jumps and movements with the troupe of six female dancers. The dancers moved to and fro on and off the stage together until eventually Aldridge entered again and like the historical hooks pulling a performer off stage she wraps her arm around Maslova’s waist and seems to halt the movements of all of the dancers. The entire piece does appear like a dream sequence in its haunting beauty of the productions a dancer has performed once now long gone, or in the pieces a dancer might dream of performing, which never come to fruition. Neenan’s choreography was a brilliant telescopic look into the backstage world of dance, capturing all of its beauty and the nostalgia with which one might leave it behind. Aldridge’s capacity to get the dancing troupes to finally depart the stage looked like a triumph in her ultimate opportunity to rest. 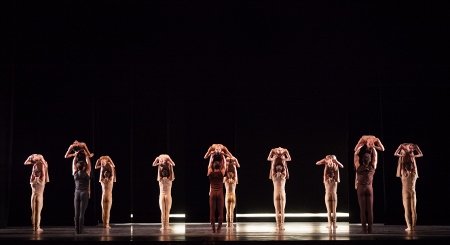 The final piece in tonight’s production was Asphodel Meadows, a company premiere, which was originally created in 2010 for The Royal Ballet’s Main Stage. Martha Koeneman and Alexander Timofeev played the pianos in Poulenc’s “Concerto for Two Pianos in D Minor” mirroring the superb ballet onstage. The dance featured three duets and lovely corps work. The women’s costumes looked to be velvet evening dresses with a plunging neckline and flowing skirts. The backdrop and lighting were reminiscent of a ritzy hotel and piano bar with movement of lighting behind backdrops appearing like the audience was traveling floors on a luxury elevator in time with the dance and the music.

Lauren Fadeley and James Ihde danced the first duet, a sultry and seductive flowing piece with beautiful lifts and extensions. Ihde and Fadeley never fail to impress as a duo and tonight was no different. Fadeley is flawless. Amy Aldridge and Ian Hussey danced the most poignant of the duets. In this piece, Aldridge exhibits a mastery of her art and a maturity that is hard to match among dancers. Even her fingertips make statements in tonight’s performance. Mayara Pineiro and Amir Yogev danced the final of the three duets. This piece was rapid and brighter than the first two. Pineiro is an energetic and capable dancer with passion for the art. She was lovely in the piece and her performance gave the audience something to look forward to in future productions.