Pennsylvania Ballet closed the 2017 spring season with Re/Action, a program including the company premiere of Christopher Wheeldon’s Rush, a selection of Pas de Deux, and a world premiere from Choreographer in Residence Matthew Neenan. Wheeldon’s Rush was the first selection of tonight’s performance. The first and third movements of this piece were a bright and lively presentation by ten of the company’s dancers, working beautifully in synchrony. The costumes designed by Jon Morrell were bright and flowing, complementing the movement and boldness of the piece.

There was a last minute casting change for the evening so that Ana Calderon, Albert Gordon, Yuka Iseda, and Craig Wasserman danced the featured roles of two couples performing synchronously. Oksana Maslova and Ian Hussey danced the second movement of the piece, and this seemed a perfect casting choice as the piece turns to a more somber movement. Maslova’s extensions were impeccable and some of her partnering with Hussey was reminiscent of spinning ice skaters. 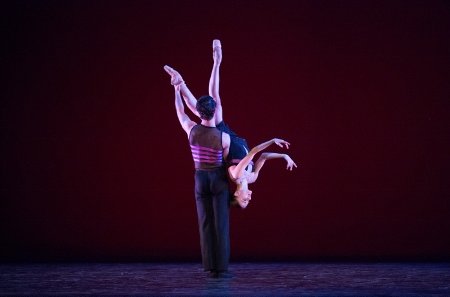 The second portion of the evening was like a buffet table of amuse-bouches with various pas de deux presented in quick succession. The first Pas de Deux was Black Swan performed by Lillian DiPiazza partnered by Aleksey Babayev. DiPiazza and Babayev performed a technically accurate and beautiful, but somewhat soul-less, presentation of this stunning Petipa choreography. The couple’s lifts and partnering were sublime, and DiPiazza is perfect, like a music box ballerina. DiPiazza’s fouettes were very impressive. Her beguiling and austere beauty is fitting of the Black Swan, but she lacks something in her interpretation of the treachery of this historically perfidious character. This character has gained some significant notoriety in popular culture since the 2010 Aronofsky film, Black Swan, lending even more encumbrance to the presentation of this traitorous figure. The Black Swan’s role has become portentous for audiences since there is now such a high expectation of the darkness of the role.  It will be intriguing to see The Pennsylvania Ballet’s full production of Swan Lake in the 2017-2018 season.

Maslova and Arian Molina Soca danced the Pas de Deux from Sleeping Beauty tonight. Molina Soca was, as usual, a true joy to behold on the stage. He is such a talented dancer and appears to always be enjoying his time on the stage while presenting a perfectly precise and effortless presentation of the choreography. He is an exceptional performer, drawing the audience in; his jumps looked as gravity-defying as ever this evening and his feet are a masterpiece. Maslova’s sinewy and strong presentation of Sleeping Beauty sparkled in her movements and her gorgeous jeweled costume. She is typically such a serious and sophisticated dancer, it was a sweet change of pace to see her featured in this lighter piece. Her solo was a bright and sunny interplay of footwork with measured and fun musicality. Maslova’s performance tonight bodes well for her future reach in various roles as a principal dancer with Pennsylvania Ballet.

The audience favorite tonight was undeniably Tarantella, danced by Kathryn Manger and Albert Gordon. This piece was an absolute explosion of movement, light, and color on stage. The choreography was fast paced and exciting and a lot of fun for the audience. The movement of this piece was non-stop and so nimble; the amazing use of the tambourine and the quickly alternating featured solo pieces were awesomely presented so the audience felt like they themselves were part of the celebration on stage. The two dancers seemed to have so much fun, and the final movement when Gordon is moving forward on one knee as Manger completed a delightful series of jumps and pirouettes had the audience screaming for more. The two received a standing ovation and encore request tonight.

Mayara Pineiro and Sterling Baca danced the Tchaikovsky Pas De Deux this evening as the fourth selection of Pas de Deux. Pineiro is really a jewel in the ballet world.  She is truly stunning and her fluid and exquisite movement flowed seamlessly, accented perfectly by her pink flowing skirt adorned with flowers. She looked like a natural element of beauty and her dancing presents itself in the same way; she always looks like she is flying in the most graceful and perfect way on stage. While her technique is precise and appears to be entirely effortless for her, her stage presence is magical and authentic. The closing piece when she jumped into Baca’s arms was superb, like a supernatural force. Baca was an excellent partner for her and they worked very well together.

This evening’s final Pas de Deux was Rubies performed by Amy Aldridge and Alexander Peters. Despite some challenges in partnering and what sounded like an extremely squeaky pointe shoe for most of the piece, Aldridge was graceful as always, and Peters presented an intriguing interpretation of the choreography. 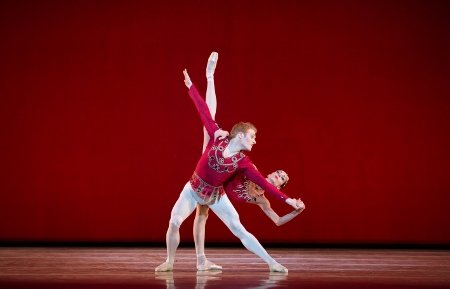 The third and final movement of this evening’s performance was the world premiere of Matthew Neenan’s Somnolence. This piece was such a brilliant concept, one wondered why something like it has not been done before. The audience gasped at the clever and huge pile of pillows set as the backdrop at the back of the stage when the curtain opened. Twelve dancers lay individually scattered on the stage in sleep attire and each on a pillow appearing like they were trying to fall asleep. The dance opened with this fascinating snapshot of what it might be like to watch a dancer fall asleep, when there are some involuntary movements captured between the state of being awake and fully sleep. The stage was dark with slivers of light over the dancers like cracks of light through curtains on a window might fall into a room. The image was all really very genius.

Jermel Johnson, Maslova, and Alexander Peters were featured through some sections of the piece and had some very fresh jump and lift sections. To the audience’s delight, one of their featured movements ended with a fun scene with the other dancers throwing pillows at them. Dayesi Torrienti and Sterling Baca danced featured roles together this evening. Amy Aldridge danced a highlighted role as well with James Ihde and Ian Hussey. Partnering these three dancers together was a nice way to watch Aldridge perform this evening, having seen her with these two dancers on stage frequently over the years. The trio was familiar and comforting together and they were a graceful and lovely highlight in Somnolence. 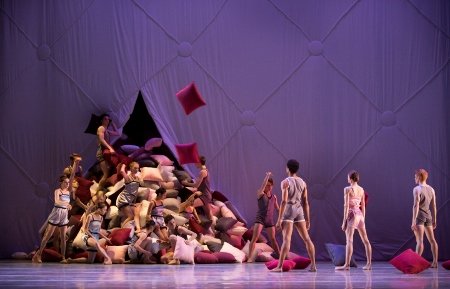 One of the highlights of this evening was the closing moment of Somnolence. The music had transitioned into a sleepy, quiet, and slow pace and Aldridge walked towards the audience with a stack of pillows, which the other dancers would slowly and individually take off of her pile one at a time. When she had just one white pillow left, she stood facing the audience and dropped the pillow on the floor. Instead of the pillow falling gently and quietly, the pillow dropped and shattered loudly, awakening the entire audience from the peaceful closing motions we had been watching. This moment was a startle and a surprise and a perfect way to say thank you to Aldridge on the stage tonight as she retires from a really amazing career with Pennsylvania Ballet. The shatter of that pillow was really a reminder to not look away just yet.