The Pennsylvania Ballet returned to New York last night for its first visit since former American Ballet Theatre principal dancer Angel Corella became its Artistic Director 18 months ago. Under Corella’s leadership, the company has reportedly been transformed (it recently premiered Corella’s Don Quixote, which was very well received) and is on its way to becoming one of the leading regional companies in the country. While I don’t doubt that that’s the case, the repertory program that PA Ballet brought with it to the Joyce Theater for this brief engagement does not reflect this change. 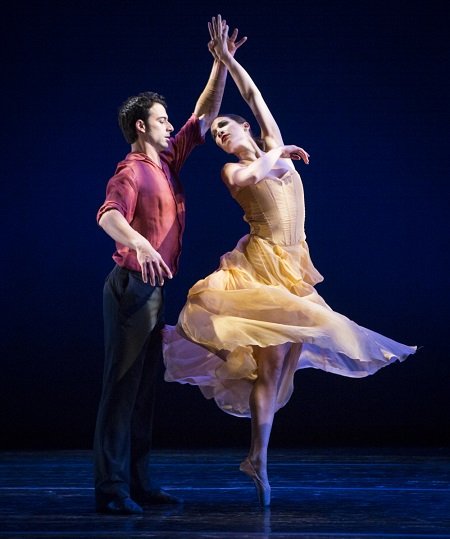 Keep, a 2009 ballet by Matthew Neenan, Trey McIntyre’s The Accidental, and Grace Action by Nicolo Fonte were the program’s components. But far more interesting than any of the ballets was the execution by the company’s dancers. With the exception of some scattered sloppy partnering, all the dancers excelled, and the most exciting performances came from its younger or newly acquired dancers – a good sign – including (but not limited to) soloists Mayara Pineiro and Oksana Maslova, principal dancer Arian Molina Soca (all relatively new to the company), and most emphatically from Lillian Di Piazza, a soloist I first recognized five years ago when, as an apprentice, she appeared in the company’s presentation of Christopher Wheeldon’s Swan Lake.

Fonte has been choreographing for more than fifteen years following a substantial dance career. The Brooklyn-born choreographer, who is currently Resident Choreographer for Ballet West, danced for seven years with Nacho Duato’s Compania Nacional de Danza in Madrid, and much of the movement quality in his dances resembles Duato’s. However, I’ve had the opportunity to see several of his pieces recently, and Fonte clearly is not limited to one particular style – his choreography is noteworthy not only for its craftsmanship, but also for its variety. Grace Action is an unfortunate title (it derives from Fonte’s intention to have his dancers find grace in the context of dynamic movement), but the ballet is excitingly staged and was dramatically performed.

It’s tempting to consider Grace Action to be primarily a product of intelligent stagecraft, and to an extent, that’s true. The vividly theatrical lighting design by Brad Fields consists of a grouping of lights in an irregular pattern affixed to the stage’s back wall and rear rafters, from which beams of light are directed at the dancers from behind and above. The spots, and the resulting beams of light, change direction during the course of the dance, and the play of light and shadow could stand on its own, together with the accompanying music by Philip Glass, as a marvelous sound and light show. But Grace Action isn’t limited to its lighting.

The ballet is comprised of six pairs of dancers, each wearing sleek black costumes designed by former company dancer Martha Chamberlain. The leotards for the women feature bold swaths of a pale color sweeping from the front edge across and expanding onto the back (at first it looked like a cut-out), with similar designs for the men. The sweep of the design (evocative of a Nike ‘swish’, but considerably more powerful) amid the base black mirrors the intense sweep of Fonte’s choreography as the dancers move within the largely darkened stage.

Fonte here fuses ballet vocabulary, including pointe work, with contemporary thrusts, lunges, and off-balance positioning that provides an extraordinary sense of the dramatic. While it’s tempting to say that the piece is about relationships, and there’s a measure of emotional gloss in the various duets, any such theme isn’t really the point. Movement that impresses solely as a result of its internal and external variety is, and if Grace Action can be said to be ‘about’ anything, it’s about the energy interplay of each of the dance’s component parts.

The piece begins with the dancers in separate arenas, one on one side, a group of three upstage from them, another group of three in a different location. As the music proceeds, dancers emerge individually from the upstage darkness or from the wings, and separate and rearrange in a dizzying but coordinated and ever-changing visual mélange (including several instances of the men pulling the women’s limbs as if they were objects in a tug of war, which sounds alarming, but is a visual extension of the focused beams of light). At times the three primary pairs separate out into different dramatic duets of varying intensity. Di Piazza’s duets with Molina Soca (as well as her individual performances solo or within larger groups) were particularly impassioned, with her extended limbs cutting through the stage space like knives – but with Di Piazza the passion is restrained and classy. The duets and individual appearances by Pineiro were less dramatic, but equally smoldering, and delivered with remarkable polish. Of the less dominant pairs, Marjorie Feiring, an apprentice, partnered by corps dancer Russell Ducker, was particularly impressive.

Neenan, PA Ballet’s Resident Choreographer, danced with the company for thirteen years, leaving in 2007 as his choreographic career was taking off. I’ve admired his work previously, particularly for the company he co-founded, Ballet X. Keep is relatively early Neenan, and is not as accomplished as the later pieces I’ve seen. But in terms of choreographic variety and novelty, it foreshadows the success of his later efforts.

Keep is roughly divided into three segments – one with two pairs (Amy Aldridge and Francis Veyette, and Lauren Fadeley and Ian Hussey), a second also with four dancers (Jermel Johnson, Evelyn Kocak, Alexandra Hughes, and Andrew Daly), although here the dancers aren’t paired, and one with Di Piazza and Molina Soca. After a shaky start, the piece comes alive with purposefulness and beauty as the accompanying music shifts to the romantic (what became And This is My Beloved, from Kismet). I enjoyed the skillfully executed dancing by all (and Aldridge, whom I recall as the spirited ecdysiast in Swan Lake, still dances with the youthfulness of her younger colleagues), especially the skillful partnering by Molina Soca and the more passionate yet serene star turn by Di Piazza. But the piece as a whole doesn’t gel.

Although it’s a non- narrative ballet, the choreography clearly distinguishes between youthful playfulness for all except Di Piazza and Molina Soca, and appears (I’m guessing here) to illustrate one woman’s (Di Piazza’s) unsuccessful attempts to establish some sort of mature relationship. However, any recognizable theme, if there is one, is unclearly communicated. As soon as a common thread materializes, it promptly disappears or seems contradicted by a changed focus. And the ending, when Soca abandons Di Piazza by placing her across a stool (one on which she sat, alone, earlier in the piece) and whirls the stool seat as she’s sprawled on it, after which, while she’s horizontally spinning, he walks off stage) is too definitive a statement to have been inserted as the ballet’s conclusion just because it looks interesting – it makes sense only as a rejection or denigration of Di Piazza’s character for no apparent reason. It left me scratching my head. 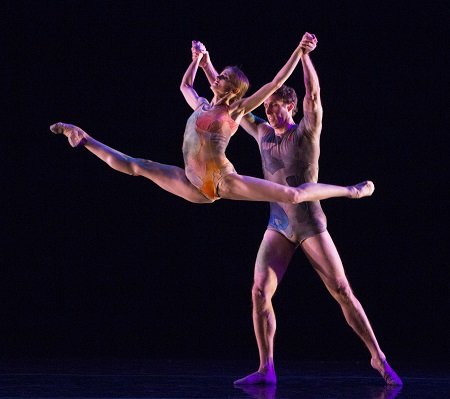 However, the most significant problem with Keep is not its choreography (which improves as the piece unfolds) or uncertain meaning (it doesn’t have to have one), but the culture clash between the Latin-flavor of the costumes by Chamberlain (for all the women except Di Piazza, tiny ‘bubble’ or ‘balloon’ skirts used as bottoms to leotards in different shades of red, and a more mature-looking yellow flamenco-like dress for Di Piazza) and the sophisticatedly romantic music by Alexander Borodin (excerpts from String Quartet No. 2 in D Major) and Nikolai Rimsky-Korsakov (String Quartet in F Major). They don’t fit together.

The less said about The Accidental the better. Created for PA Ballet in 2014, the choreography utilizes a limited vocabulary, and the costumes by Andrea Lauer (describable as ‘woodland leotards’) are simply strange. Divided into four segments to uninspired music by Patrick Watson (songs from Adventure in Your Own Backyard), the dance opens with a choreographically unimpressive juvenile-looking duet (nicely danced by Kocak and Wasserman), and concludes with a strange solo for Wasserman that looks improvised, which followed an unimpressive duet for Hughes and Hussey. My understanding is that The Accident was created as a consequence of experimentation and exploration between McIntyre and the original dancers – which perhaps accounts for its title, but except for the continuity of the costumes (which shows an attempt to convey something), it looks like a thrown-together accident.

By far the best part of the piece was the second segment, a jazzy presentation that introduced me to Maslova, a pixie of a soloist, who, at least in this piece, showed an extraordinary technical proficiency without any accompanying tortured affectation (and the Mutt and Jeff partnering with James Ihde made the segment look even more intriguing). I look forward to seeing her classical technique when the company returns, hopefully soon, and with a more impressive repertoire.