Artistic Director Angel Corella introduced this afternoon’s presentation of Romeo & Juliet with a dedication to Beatrice Jona Affron, Music Director and Conductor for Pennsylvania Ballet. Affron is credited with being a “silent poet” for the company as well as the city of Philadelphia. She has led more performances at the Academy of Music than any conductor before her. Dancers and musicians alike cite her as a person of extraordinary compassion, professionalism, and integrity. The music of Romeo & Juliet by Sergei Prokofiev showcased Affron’s magic as a conductor and musical force. Affron graciously accepted her lauds of praise, but did not leave the audience waiting longer than a minute to jump into her position in the orchestra pit and begin the overtures of Romeo & Juliet.

The production opened on an immense mural, occupying the entire stage, of a landscape with two large regal houses on either side, as if en face and seemingly already at odds in the picturesque view. As this façade lifted to transport the audience to one of many elaborate scenes, it was clear that no stone was left unturned in the intentionality of every detail in the production’s scenery and costumes by Paul Andrews. The elements of every set were impeccably executed – even the floor was dappled to appear like a flat stone surface. This is the first time Pennsylvania Ballet has performed Sir Kenneth MacMillan’s Romeo & Juliet, and the production established the company’s ability to create a meaningful, entrancing dance narrative. The grandiose movement of the story from place to place throughout the performance created a vast expanse in which to tell the greatest love story of all time.

Act One, Scene 1 was set in The Marketplace where the audience is introduced to Romeo, danced by Sterling Baca in a last minute casting change, as he seeks the company of Rosaline, danced by Jacqueline Callahan. The Marketplace erupts into an onslaught of movement of townspeople and raucous life. The Harlots, danced by Alexandra Hughes, Ana Calderon, and Adrianna de Svastich, were a humorous and exciting trio. Their bawdy hairstyles and flashy character dance were an entertaining addition to every Marketplace scene, and all three seemed to be enjoying their roles. Calderon’s great smile was a wonderful nuance that set her apart in her character’s rendition.

Romeo’s friends – Mercutio, danced by Peter Weil, and Benvolio, danced by Russell Ducker – were exceptional highlights in today’s production. Baca, Weil, and Ducker danced together as a trio multiple times and their power as dancers was quite clear. The three played well off one another, like jovial young friends enjoying their time in the Marketplace and as guests sneaking into the ball at the Capulet’s home in Act One. Weil’s Mercutio was an excellent character interpretation, embodying Shakespeare’s mercurial and unpredictable details. Weil’s leaps were impressive and far-reaching, consuming every possible space on the stage. When Mercutio was executed in Act Two, Weil’s movements – as if he was simply maimed then continuing to fight – were gripping. When he ultimately died, reaching an outstretched arm towards Romeo and Tybalt, each, the audience was entranced as he sealed the two men’s fates with his dying breath. This movement lent a level of meaning to a passage in literature that could only be elevated through the drama of this dance.

The staging of scenes when the entire space was full of dancers was very impressive. The excitement of the fencing scenes was palpable in the audience. The dances when suddenly Capulet and Montague men sword-fought, their swords heard quickly tapping against one another as the men moved back and forth between all of the other dancers on stage, caused some audience members to hold their breath in anxious anticipation. The feud in Act One, Scene 1 ended when Escalus, Prince of Verona (danced by Ian Hussey dressed in an elaborate suit of golden armor and almost unrecognizable) arrived, demanding peace. Members of each family, pulled bodies into a heap of dead on the floor after the feud, reminding the audience that the tale of Romeo & Juliet inevitably ends as a tragedy of loss. There was a notable sterility and proprietary tone to many of the scenes in the Marketplace and at the Capulet ball, which truly set apart the moments of true passion in the production when they arrive in the story. 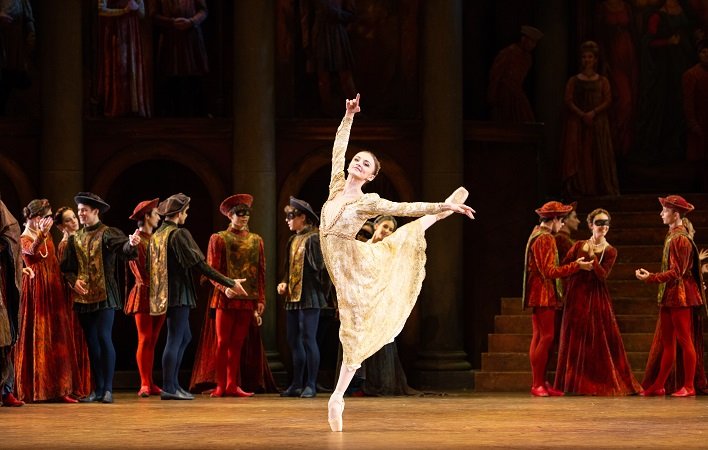 In particular, the ball at the Capulet’s home is set in a large two-story room where many dancers walk around the center stage on the second floor looking down. There is a life-size portrait hung at the top of the stairs showcasing four women dressed in the same elaborate and regal heavy dark red and blue gowns, as the female dancers at the ball. The image this created was as if an audience member was simply looking into a large period painting. The function it served to off-set Juliet as she entered was utter perfection. A child nearby in the audience said that Oksana Maslova’s Juliet looked like a beautiful angel when she entered the ball. Maslova’s shorter, lighter, and youthful sparkling gold ball gown presented her as the perfect Juliet, of light heart and pure intentions, in sharp contrast to the dark and heavy gowns of the other women at the ball.


Like a dream, Baca’s sumptuous Romeo was drawn to Maslova’s Juliet at the ball, like two magnets in their rapture. Their pas de deux at the ball was exquisite, as magical as one could dream for their first dance. After the ball concludes, the audience is transported to a different view of the Capulet residence, where Maslova’s Juliet is seen in the balcony in the most famous of all moments from the tale of Romeo & Juliet. The lighting design by Brad Fields and Joseph Naftal was perfect at this moment, casting shadows on the pillars and statues outside of the balcony and shining a bright soft light on the beautiful Juliet on the balcony. 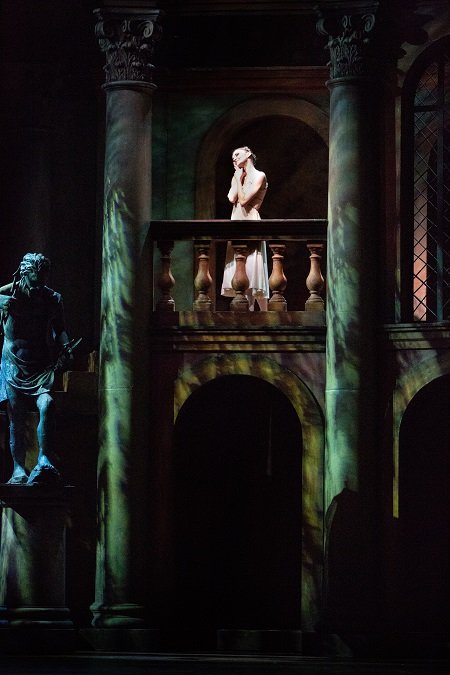 Baca exploded onto the stage in the shadowed light seeking her out. Their pas de deux when she exits the balcony to see him was perfection – every tip-toe, every movement of an arm or finger near each other was like the stolen brilliance of a comet, fated to never last.  The pair captured the sentiment of the two star-crossed lovers to every detail, like two stars or planets streaming past, the audience knowing the beauty of such a perfect thing could never be fated to last. The gravity-defying moments when Baca, on his knees, lifted Maslova to a pristine arabesque passé en l’air and even at one point turned her entirely upside down with her legs pointed beautifully up to the sky, served to turn the audience on its head as well in the wonder of its possibility.

The beauty of these moments and the known ephemeral nature of them, made the sounds of the violins as the curtain opened on the final scene in the Capulet Family Crypt in Act Three, Scene 4, even more poignant and chilling. One always struggles to understand the ill-fated demise of these two young lovers and MacMillan’s Juliet in Maslova’s interpretation attempted to perfectly make sense of it. MacMillan’s Juliet was intended to be determined and passionate, deciding all major decisions of her relationship with Romeo. Maslova embodied the pain and the passion of this intriguing character as she struggled to make her final choices in her ill-fated path. As an audience we watched her evolve in Act One from a young child playing dolls with her nurse, endearingly danced by Jessica Kilpatrick, to a process of forced decision, one which she would never have chosen for herself, nonetheless forced upon her by the constraints of her station in life. 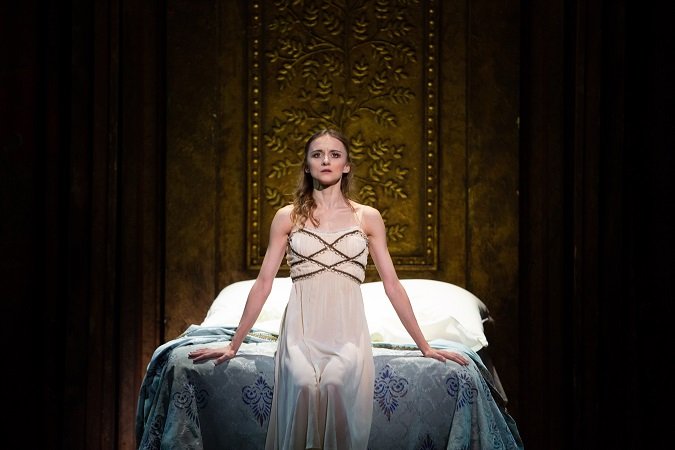 In the legendary chain of events resulting in the finale of Romeo and Juliet taking their own lives, the audience is left with the empty space in the heart knowing that in the universe a love existed where there was no point in living if the love did not exist. Maslova’s Juliet died in repose on her bed reaching out to Baca’s Romeo in a scene reminiscent of their reach as the curtain closed at the end of Act One, Scene 6, when they said good-bye over the balcony ledge. This time, though, the farewell is forever. Every miniscule detail of Maslova’s despair through her dancing and her passion of interpreting Juliet is meaningful and wonderful in its execution of pain and frustration.

When Baca finds her lifeless form and attempts to dance with her and lift her in the air, Maslova’s limp arms and legs are fragile, like a small doll herself, stripped of the ability to control her movements. Timely in the presentation of a woman forced out of a choice, though her intentions were pure and simply not what others wanted for her, Juliet’s struggle in her decision to ultimately drink the poisoned elixir brings to life a timeless tale, whose message of sealed fates and a life lost because of a freedom-less fate will be significant forever. 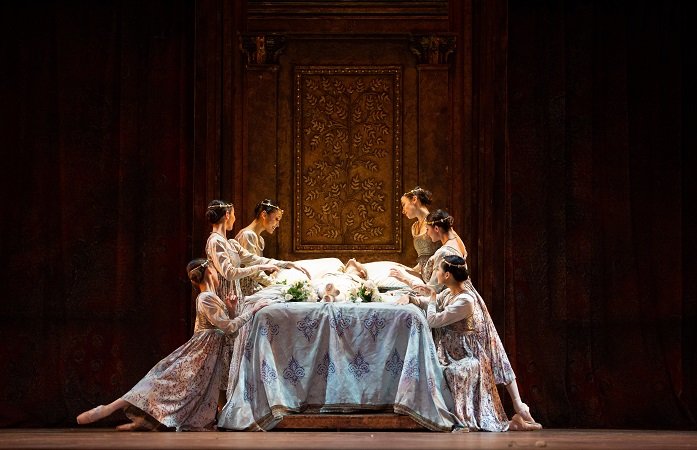 While the audience knew the inevitable end of the tale for Romeo & Juliet, there was something shocking about Tybalt’s death on the day of this performance and the reactions it stirred in the audience. Tybalt was danced by Jermel Johnson – a dancer of iconic grace and strength, with an astounding capacity to embody the characters he plays. He is truly a master of his craft as well as a work of art to behold in and of himself, as a dancer. Today, though, his anger and passion in this character were particularly striking. His intention and fortitude were precise in every movement of his sword, his turns and immense jumps and in his body as it seemed to break in half as the sword was plunged into his stomach.

The moment that captivated everyone today, though, was his death and then sudden and surprisingly dramatic and passionate entrance of Lady Capulet, danced by Marjorie Feiring. Feiring’s performance of passionate wailing and her obvious despair were perhaps the most moving moment in the entire day’s performance. Though the suggestion of a relationship between Lady Capulet and Tybalt was a well-kept secret to this point, it was the explosion of this emotional force that brought the audience to tears. On reflection, though, the undercurrent of the message seemed intentional. The voice this moment in the choreography and its execution lended to the understanding of unrequited love, the love other characters have hidden as well, beyond Romeo and Juliet; the force required to hide true love in the face of a sterile and proprietary society, and the damage undertaken by the loss of choice of love and life for many.

Pennsylvania Ballet’s production of MacMillan’s Romeo & Juliet achieved everything it set out to achieve today. The sets, the music, the costumes, and the dancing were perfect. The hidden magic and surprise, though, was the secret in the story that only the company of Pennsylvania Ballet could concoct in their magical elixir that cast a spell on all of us today.