If everyone loves a happy ending, then what better way to open a ballet season than with a beloved fairy tale classic? Following the success of last season’s opening program, Cinderella, Pennsylvania Ballet began the 2017-2018 season with Angel Corella’s staging of The Sleeping Beauty with choreography after Marius Petipa and Lev Ivanov. Once again, the Academy of Music’s Saturday afternoon audience was filled with enthusiastic young ballet-goers, excited to see good triumph over evil.

Corella’s trimmed-down version, with a running time just under three hours (including two intermissions and a pause before the final act) is more child-friendly and moves at a more 21st century pace, but feels every bit the classic with Tchaikovsky’s iconic score (played beautifully by the orchestra, conducted by Beatrice Jona Affron) and opulent sets and costumes by David Walker. Though there were no principals or soloists cast in this closing weekend’s Saturday afternoon performance, the corps members, apprentices, and Pennsylvania Ballet II members delivered all the anticipated magic and enchantment, while demonstrating the depth of talent in the company’s roster.

With over twenty distinct featured dancing roles, The Sleeping Beauty provides a multitude of opportunities for young company members to shine, but the ballet’s success relies most on the three main characters – Princess Aurora, Prince Desire, and the Lilac Fairy. Danced this afternoon by corps members Kathryn Manger, Albert Gordon, and apprentice Sydney Dolan, respectively – the three young talents each rose to the occasion with admirable confidence. 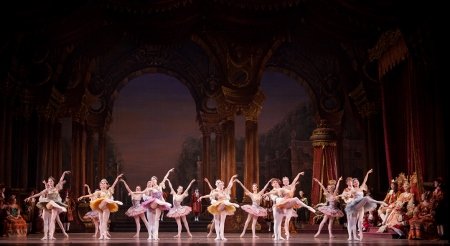 In the bright, festive Prologue featuring the christening of the infant Princess Aurora, none shone brighter than Dolan as the Lilac Fairy. Graceful and regal, she exuded joy in every movement, with a radiant smile that seemed to reach the darkest corners of the theater. Her clear mime effectively conveyed the crucial part of the story – her conversion of Carabosse’s curse of death instead to a deep sleep that could be broken by true love’s kiss. Dolan was consistently exceptional in Acts I and Act II, but the Lilac Fairy has a seemingly abbreviated role in Act III. The Lilac Fairy does bestow her blessing on the newlyweds, but there’s more emphasis on the other cast of characters who attend the wedding. By this point, however, Dolan had already made a lasting impression.

When Manger makes her first appearance as sixteen-year-old Princess Aurora in Act I, the audience collectively gasped. Certainly there’s the usual element of seeing the grown up Princess for the first time, but also the ultra-petite Manger actually looks sixteen (if not younger), and plays the part appropriately. Sweet and affectionate without being overly emotional, and slightly timid but never hesitant, Manger showed excellent balance and poise in the Rose Adagio. She was a typical excited but stubborn teenager as the King and Queen attempted to caution her about the spindle – hearing but ignoring their warnings, and showing the gift to her friends.

Albert Gordon was a reliable partner as her Prince Desire, and the pair danced consistently and steadily together, although it took a while for them to seem really in love – if they ever fully reached their happily ever after (then again, they’re both young, and they did just meet, right?). Manger came frighteningly close to hitting the ground in the first fish dive in the Grand Pas, but the following dives were much more secure. Gordon was a serious, stoic Prince Desire, but showed his excellent technical skills with beautifully athletic leaps and tours, and wonderfully centered and controlled pirouettes. 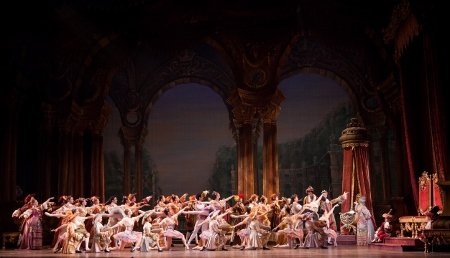 Also enchanting were the other various fairies, danced by Jacqueline Callahan, Alexandra Heier, Cassidy McAndrew, Emily Davis, and Therese Davis; the sinister Carabosse played by Samantha Dunster; the acrobatic Carabosse Creatures – Cato Berry, Tanner Bleck, Taro Kurachi, and Ashton Roxander; and the four regal Act I suitors – Aaron Anker, Russell Ducker, Zecheng Liang, and Craig Wasserman. The Garland Dance was exceptionally jubilant and moved at such a blistering pace at the end, that the corps’ ability to keep a calm and convincing smile while at high risk of colliding with each other was almost as impressive as moving so many people so quickly and intricately in the space allowed. 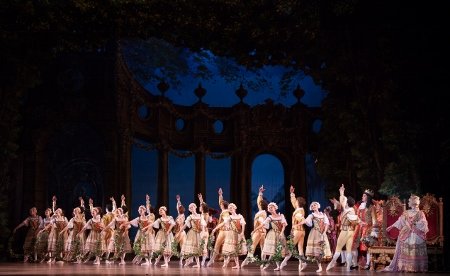 Highlights of the Act III wedding guests included the dazzling Jewels – Jack Thomas as Gold; Therese Davis as Silver; and Ana Calderon, Yuka Iseda, and Nayara Lopes as the Precious Stones. The White Cat (Adrianna de Svastich) and Puss ‘n Boots (Jack Sprance) drew laughter from the children in the audience with their cat-like antics in a brief feature, and Red Riding Hood (Misa Kasamatsu) and the Wolf’s (Aaron Anker) cameo was so brief that it almost seemed like Red Riding Hood accidentally passed through the castle while running away from the Wolf, rather than actually attending the wedding. So-Jung Shin as Princess Florine with Zecheng Liang as The Bluebird were a breath of fresh air with smooth, light, and graceful partnering.

Pennsylvania Ballet closes Sleeping Beauty this weekend, but returns in a few short weeks from November 9-12 at the Merriam Theater with “On Edge” – a program featuring world premieres from Helen Pickett and resident choreographer Matthew Neenan, and Alexander Ekman’s Episode 31. The company will perform George Balanchine’s The Nutcracker from December 8-31 before returning in March 2018 with Corella’s version of Swan Lake.