Audience members awaited their seats early today at the Merriam Theater on this beautiful spring day, as if what they expected from Pennsylvania Ballet’s All Stravinsky Program would surpass the delights of the cherry blossom season freshly burst upon the city of Philadelphia. The excitement was palpable as the curtain opened on the still and statuesque figure of Arian Molina Soca as Apollo and gasps of awe were heard throughout the theater.

Apollo was a pleasurable opening selection in today’s program in its efforts to introduce Igor Stravinsky’s stylistic diversity as a composer and the first major collaboration between Stravinsky and George Balanchine performed first in 1928. Balanchine’s choreography in Apollo was interesting and timeless in its intentional restraint of movement and refinement in its precision. Soca’s rendition of Apollo was masculine and beautiful. He struck an infinite number of picturesque shapes fitting of the subject of a photograph today, strikingly in alignment with Soca’s new and impressive work as a photographer himself for Pennsylvania Ballet. Soca is demonstrating himself to be a dancer of extreme talent who embodies his art but is also capable of capturing the beauty of its form through the lens of his camera when he looks on other dancers in their work and beauty. 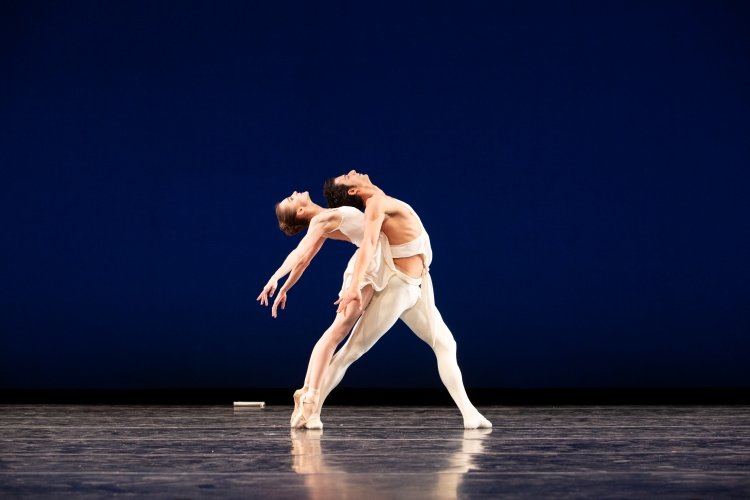 The three female dancers featured today as Apollo’s half-sisters were Oksana Maslova as Terpsichore, Dayesi Torriente as Polyhymnia and Nayara Lopes as Calliope. All three dancers performed their selections with extreme precision and flawlessness. The rapture of their performances was not necessarily in their athletic extensions or ability to fill the stage but more in their delicate delivery of the reserved yet complicated choreography. Their ease of movement made it easy to overlook the difficulty in the intricacies of their footwork.

The magnificent collaboration required to dance in intertwining shapes together in such a beautiful and seamless framework was like looking into a perfect pocket-watch where one can see all the tiny moving pieces functioning flawlessly with a clock-work fastidiousness. The moment when all three women held hands in a circle with Soca with their backs to one another and delicately lifted their legs in a simultaneous arabesque penche was breathtaking.

They had a seemingly unconscious capacity to register their neighbor’s location and timing in such a way that their legs appeared to arrive upwards at exactly the same instant but in truth they silently negotiated the arrival of their arabesques so that no single dancer was affected by another, like one person breathing the same breath. The audience’s rapture was felt most strikingly in the last moment of the piece in the iconic shape created of the three women’s legs in arabesque at slightly different heights holding onto Soca’s Apollo in the shadow of the setting sun, like the Gods of the myths from which their story stems. The audience was enraptured with this piece and the applause was effusive. 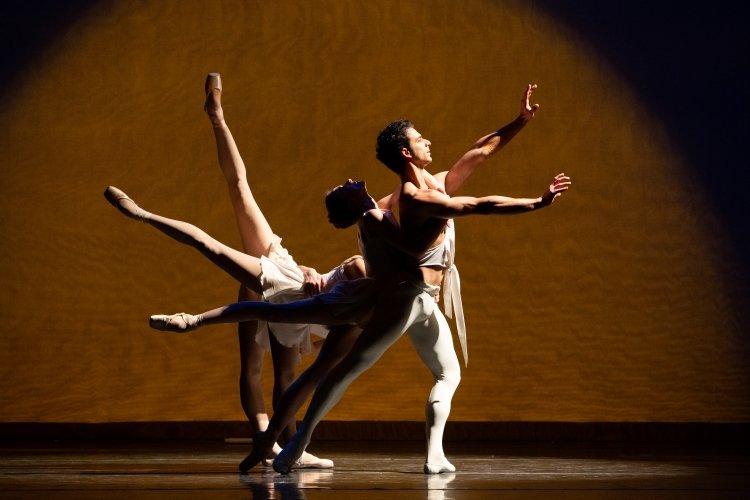 After a brief pause, today’s performance moved to the second selection, Deco, a world premiere by Matthew Neenan set to Stravinsky’s Tango (1941) and Sonata (1924). Albert Gordon was heavily featured in this piece as the opening soloist. His movements were simultaneously sharp and whimsical with flair reminiscent of the movement of the tango. Jacqueline Callahan and Kathryn Manger danced the female roles in this piece today. They were both tempestuous and flirtatious in their dancing and invited the audience to share in the fun and seduction of this piece. 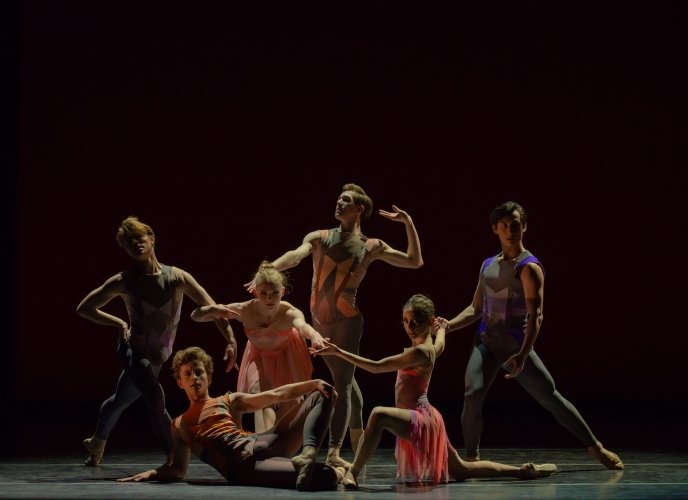 There were some intriguing moments when the dancers danced to silence and then they were joined by Stravinsky’s magical score, transcending a space of sound and movement that brought authenticity to the intention of the piece. The pianist, Martha Koeneman, played all of the music for this piece. Koeneman’s bright light for her music set an interesting scene against the dark stage and dramatically underscored the musicality of this piece and created the ambience of a tango. Manger was a real highlight here; she clearly enjoys performing and is so light-footed and delightful to watch. The strident closing pose of the five dancers as the lights went out finished this piece on another strong note as the dancers’ enticing smiles and outstretched arms were still visible, reminiscent of a scene from a raucous night of fun that the audience definitely enjoyed.

The third selection, and favorite, today was the company premiere of The Cage choreographed by Jerome Robbins (1951) felt at the time to be a shocking piece of choreography. The Cage was an exceptional selection to feature the power of the female dancers of Pennsylvania Ballet. The curtain opened on a full stage-height web-like cage structure enclosing fourteen of the female dancers, unrecognizable in flesh-toned leotards covered with intricate dark markings and with their hair splayed out in wild shapes. Thirteen of these women surrounded another woman, the Novice, danced by Yuka Iseda, who was wrapped in a shroud almost like a mummy. The women’s movements were harsh and brutal as they unwrapped Iseda from the shroud and in an animalistic interaction left her exposed. 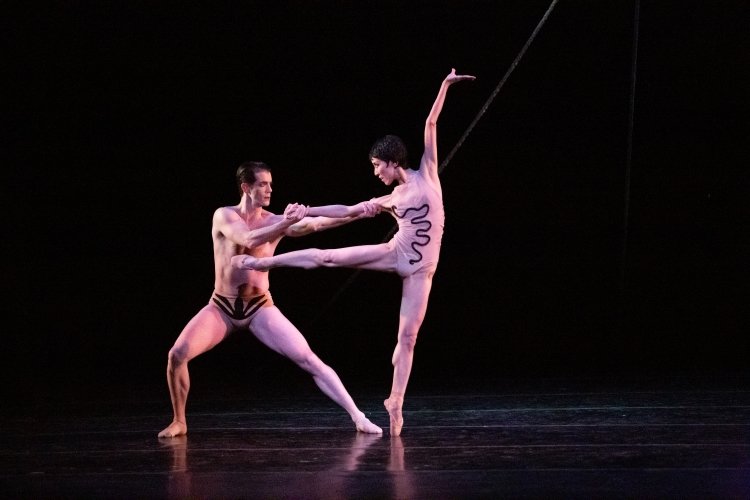 Iseda’s movements were initially frail and entirely convincing as she reached out to find her space and then would cower into herself as the most vulnerable creature amongst the group. Her costume was similar to the other women once unclothed but there was the added feature of a white rib cage over the back of her leotard  which enhanced her appearance of vulnerability. Sydney Dolan masterfully played the role of The Queen of this band of creatures; her movements aggressive and violent as she claimed her space as the dominant creature.

Aleksey Babayev danced the role of the first intruder into the cage and Iseda’s Novice moves quickly and brutally to make him lose his footing. Her petite frame appears to violently break his neck against a dramatic crashing note in the music. Even more shocking was Ian Hussey’s interplay with Iseda when he appears as the second intruder into the cage. Iseda and Hussey perform the most lovely and passionate pas de deux of the entire performance today. The dance was unparalleled in its capacity to convince the audience that the two were enraptured with one another. Their partnering was perfect; her extensions beautiful and their connection as dancers magnificent. The grotesque nature of Iseda’s quick movements to destroy Hussey, after their perfectly beautiful and intimate pas de deux, was shocking and terrible. Iseda’s interpretation of this character, initially so fragile amongst the creatures, with the ability to transition into extreme aggressive violence such that she is ultimately elevated amongst the creatures in the cage was truly horrifying and chilling. The Cage was definitely the highlight of today’s production and left the audience in complete awe. 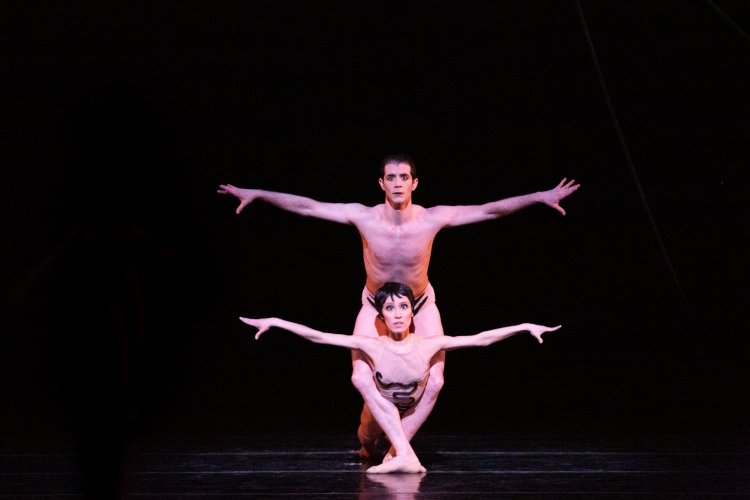 The closing selection after a second intermission today was Stravinsky Violin Concerto, an enduring collaboration between Stravinsky and Balanchine. Mayara Pineiro and Lillian DiPiazza were the featured female principal dancers in this selection. Zecheng Liang and Sterling Baca were their respective partners. The first movements of the piece focused on one of the principal dancers set against for four dancers of the same or opposite gender. The movements of the piece throughout were quick and vivacious and the group of dancers had a great energy moving the audience through each asymmetric pairing.

Pineiro and Liang danced the first pas de deux, intended to present a sophisticated portrayal of power dynamics. The message was most obvious in the unusual shapes the two dancers created as Pineiro circled the stage in an interesting revolution of backbends with her hands on the floor. Pineiro delicately placed her arabesque onto Liang’s shoulder and he gracefully promenaded her in this challenging position. Their pas de deux was artistic and captivating.

DiPiazza and Baca danced the second pas de deux, the focus of which was an affectionate and oppressive co-dependence between partners. DiPiazza danced this pas de deux beautifully. The curiosity of their forms piqued the audience’s intrigue as DiPiazza’s feet were flexed in fifth position and Baca lifted her into the air. It was curiously off-putting but intriguing and well-delivered. The passion and poignancy of the piece was most obvious in an extended moment when DiPiazza simply leaned backwards on Baca and they watched her hand move back and forth together. 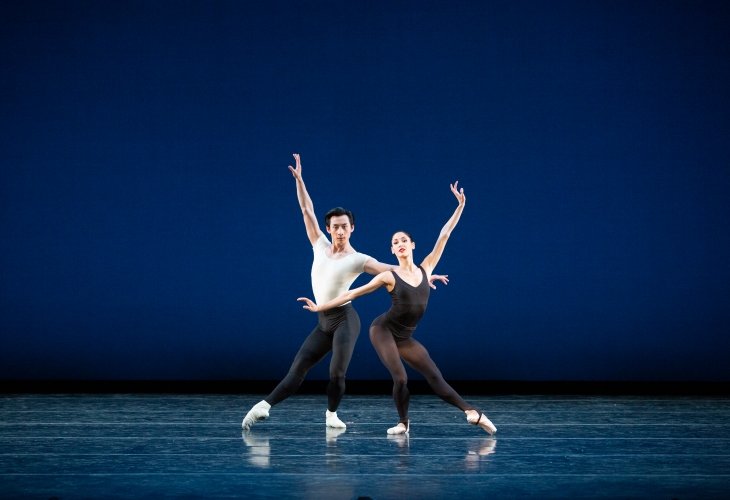 Stravinsky Violin Concerto closed on the entire group of dancers moving brightly in a beautiful collaboration against a light portion of music. The choreography again created the image of an intricate piece of craftsmanship, a perfect pocket-watch where every single tick of a second hand and turn of a tiny pointe shoe works in unison to shift all of the pieces of a glistening piece of machinery together. The audience was spellbound with today’s performance and the Merriam Theater was filled with thunderous applause as the production ended.