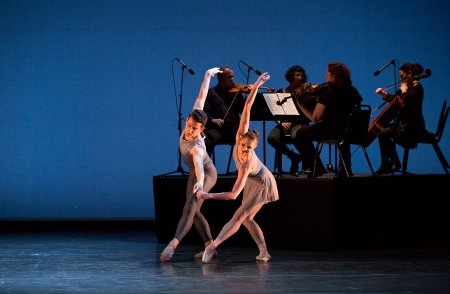 “Strength and Longing,” Pennsylvania Ballet’s first program of the year (after record-breaking Nutcracker ticket sales in December), included three company premieres, Without Words, Chutes and Ladders, For Four, and a company favorite, N.Y. Export: Opus Jazz – all of which displayed the company’s youthful talent and versatility. Artistic Director Angel Corella, an original cast member in both Nacho Duato’s Without Words and Christopher Wheeldon’s For Four, described (in the program notes) directing these premieres as “a wonderful experience […] to see the dancers achieve not only what you have achieved but to even improve upon it.”

Though new to the company, Without Words fits like a glove. Set to music by Franz Schubert, played expertly on Saturday afternoon by Jennie Lorenzo (violincello) and Martha Koeneman (piano), the piece explores themes of life and death. Images of the dancers are projected onto a black curtain during the performance – a head on a shoulder here, limbs intertwined there. Eight dancers in flesh-colored costumes dance mostly in trios and duets with an occasional solo – but what really stood out at the matinee performance was the interaction between the dancers. Alexandra Hughes and Andrew Daly impressed with seamless and fluid transitions, Ana Calderon and Russell Ducker shared an intense emotional connection, and James Ihde and Elizabeth Wallace displayed their strength and athleticism. Oksana Maslova and Arian Molina Soca danced so gracefully and deliberately they sometimes appeared to move in slow motion, allowing the audience to revel in the beauty of the lines and forms they created. Add to that Maslova’s spectacular extension, and the pair left more lasting images in the minds of the audience than the photographs projected on the stage.

After a brief intermission, Lauren Fadeley and Craig Wasserman performed Chutes and Ladders, a ten-minute pas de deux with a string quartet positioned on a raised platform on the stage. Choreographed by Justin Peck, Resident Choreographer of New York City Ballet, and set to Benjamin Britten’s String Quartet No. 1 in D Major, the piece is described in the program notes as “primarily an interpretation of the music, exposing details of the music through movement.” Fadeley and Wasserman were light and playful in their pairing, intermixing sharp, staccato movements with smooth sweeping motions as the music ranged in mood and tempo. Few can match Fadeley’s natural sparkle, but Wasserman held his own admirably opposite her.

For Four was originally created by Wheeldon in 2006 “for four of the best male dancers in the world from four different schools of dance (Cuban, Russian, Danish, and American – the Balanchine style)” and was “designed to show off the qualities of the four dancers it was made on; Corella the powerhouse, Stiefel the classicist, Tsiskerizde the Adagio dancer and Kobborg’s Danish petit allegro” (program notes). With apparently big (dancing) shoes to fill, it’s impressive that Pennsylvania Ballet has found multiple casts of four men sharing these qualities, and even more impressive that Saturday afternoon’s cast included two apprentices – Jack Sprance and Michael Holden, with Etienne Diaz and Ducker. The four men all danced with athleticism, masculinity, and grace, making seemingly easy work of pirouettes, dazzling leaps and intricate footwork. Diaz performed with impressive gusto, taking over the “powerhouse” role – whether or not this was the role assigned to him.

The program ended with a company favorite, N.Y. Export: Opus Jazz, choreographed by Jerome Robbins, reflecting the post-war era of New York City. The ensemble strutted onto the stage, full of attitude and ready to rumble West Side Story-style. With swinging hips and snapping fingers, at times their swag came dangerously close to cool indifference, but just when the energy level threatened to drop, a shift in the music or a different group of dancers infused more color and sass, reinvigorating the performance. The men’s corps in particular seemed to really enjoy themselves, and the full ensemble gained momentum at the end of the piece.

Pennsylvania Ballet returns to the stage in less than a month, when the company ambitiously presents Corella’s staging of Don Quixote at the Academy of Music in Philadelphia from March 3 to 13, 2016.