There was a sense of urgency as throngs of attendees crowded the ticket line and awaited an opportunity to enter the final presentation of Pennsylvania Ballet’s Swan Lake for the 2017-2018 season. As the last of audience members hurriedly made their way to their seats for a delayed curtain, one could not help but stop to look at the beautiful details arranged in the Academy of Music entry to the theatre. There was a gorgeous constructed swan made of white flowers and feathers that so many wanted to snap a photograph with, and in a nearby window encasement was one of the antique Swan Lake costumes from the past with a beautiful black and white photograph of former dancers from Pennsylvania Ballet dancing the Cygnets variation. These small yet meaningful touches were the perfect way to develop the magic of this spectacular tribute to the original work of Swan Lake. The nostalgia was real before the piece began, and today’s dramatic performance left no stone unturned in its look at the past in bringing this iconic classic back to life in its fullest measure. 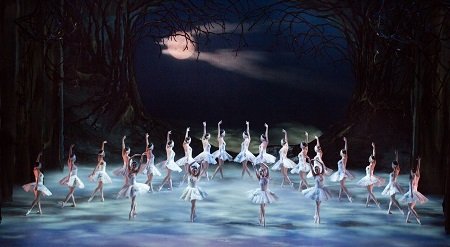 Act I opened on a magnificent idyllic setting just outside Prince Siegfried’s castle. Benjamin Tyrrell’s genius in setting and costume design impressed from the first moment to the last, and not a detail was lost in his brilliant work or the audience’s appreciation of its grandeur. The lush dresses of the aristocrats were period-perfect in rich royal hues, and the skirts spun and swayed beautifully as they danced. Jack Thomas, a member of the corps de ballet, danced the role of Prince Siegfried. His youthful interpretation was smooth and easy to watch. This casting choice was simply brilliant in the highlight of a relatively newer male talent at Pennsylvania Ballet in such a key role. Thomas’ technique was impeccable; his effortless prowess as a dancer was striking as he glided with ease around the stage during his leap and turn sequences, seeming right at home in the spotlight.

Etienne Diaz performed the role of Benno, the Prince’s friend. His technique was precise, and his jumps at times seemed so incredibly high. Nayara Lopes danced beautifully as the Peasant Lady who joins Wolfgang, the Prince’s tutor, played by Jon Martin, in a jovial pas de deux that had the audience giggling with her as she spun the portly Wolfgang around, tiring him out with their dance. A highlight in Act I was the trio of Diaz and his friends, danced by Kathryn Manger and Yuka Iseda. This was another brilliant casting selection because the three seem to so undoubtedly embody that beautiful effortless bliss of youth. Manger and Iseda are both dancers who emote happiness from the stage, and in their flowing pink dresses, watching them was like enjoying a perfectly not-too-sweet dessert. Manger’s footwork is dainty and delicate and her stage presence is enthralling and captivating.

The curtain closed on Act I after the Queen, danced by Valerie Amiss, directs Prince Siegfried that he must find a bride and he departs from the stage. The staging in the transition from Act I to II was simply incredible. The scrim at the front of the stage was set with a light shining on it with the re-creation of the shadows of tall leafless trees in the darkness. Fog developed along the floor of the stage creating an eerie and intriguing vision as the Prince crossed behind the scrim with his hunting party looking ahead with lanterns. The curtain then opened on yet another flawless set of dark trees with dark vines overhanging and a full moon visible through a clearing that looks out at the water in the artistic backdrop. The staging of this scene was stunning and created such a magical enthralling place to meet the Sorcerer, danced by James Ihde, and the iconic swan maidens of Swan Lake. Oksana Maslova entered Act II as Odette, the fragile, beautiful and sad Swan Queen. Maslova’s storytelling of Odette’s heartbreaking history was so touching and perfect, her arms like a waterfall of tears as she recounts the terrible spell that changed the maidens into swans. 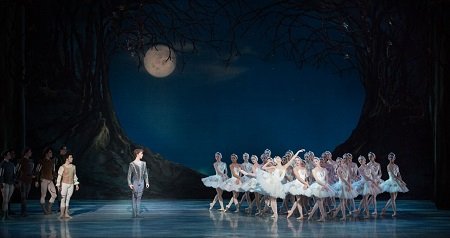 Maslova’s performance today catapulted her into a sphere of dancers that is rare in her capacity to embody such a legendary role so well. Her interpretation of Odette/Odile was one for the ages. In every facial expression, arm movement, extension and moment of storytelling, she delivered a passion that embodies the dream of every little girl who has longed to be a ballerina. In truth she could have been dancing as if no one was watching, she was so immersed in the moment. She was breathtaking and incredible. Her inspiration was clear as audience members gathered around the souvenir table at intermission longing to find a pair of her autographed pointe shoes, only to be told by the checkout person that those were all sold out, but those of other dancers were available. 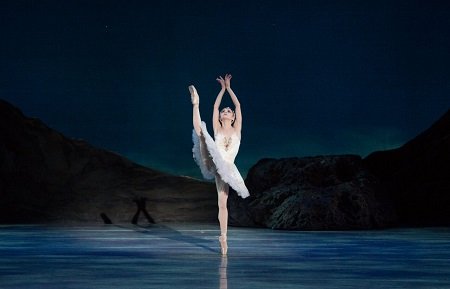 There were two awe-inspiring moments at the close of Maslova’s pas de deux with Thomas, once as Odette and once as Odile, when the music seemed to follow Maslova’s direction and not the other way around. Maslova would seem to spin and spin in pirouette on the sound of a lingering string, which would take its last pluck as her leg extended gracefully into an attitude arabesque, arms extended into the outstretched wings of Odette or Odile as she froze in space. This magical interplay of the dancer with the violinist, Luigi Mazzocchi, and the Orchestra of Pennsylvania Ballet was exquisite.

Act II was flooded with the iconic motion of a sea of white swans, performed by the Artists of Pennsylvania Ballet. Though there were twenty-four dancers, there were moments when it felt as if there were hundreds. The corps’ work of the troupe of swans was so perfectly reminiscent of the historical photographs of Marius Petipa’s Swans with their overhead port de bras in the shape of wings with the beautiful break at the wrists. The swan costumes were delightful in their delicate detail and perfectly feathered headpieces and fragile crowns.

The iconic choreography performed by a graceful and technically precise troupe of ballerinas in these gorgeous costumes set against the haunting backdrop of the moonlit trees created chills as one watched and recognized the magic one was witnessing in this interpretation of Swan Lake in its purest form with attention to every detail. The quintessential arabesque sautes looked light and lovely on this corps, and their formations as part of the background for Maslova and Thomas’ courtship was so moving. Manger, Iseda, Alexandra Heier and Emily Davis performed a classical rendition of the Cygnets. Alexandra Hughes and Holly Lynn Fusco danced the roles of the Big Swans, leading the corps through their amazing formations.

Act III transported the audience to a stunning Ball setting replete with high columns,  lush curtains and the large window where we would see the images of the frantic Odette through the shadowed glass as Odile beguiled Prince Siegfried on this haunting night. Heier danced the role of the Spanish Princess, Siobhan Howley the Italian Princess, Misa Kasamatsu the Hungarian Princess and Jacqueline Callahan the Polish Princess. Their costumes were impeccable – decadent flowing royal gowns with matching feather fans and elaborate crowns. 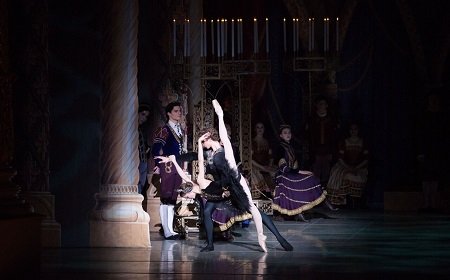 Diaz performed an athletic and graceful solo in Act III. Manger and Ian Hussey were a high point in Act III as the central dancers in the Czardas. Manger has a captivating stage presence and her jubilance is so infectious. Zecheng Liang and Ashton Roxander performed as the Neopolitans in a fun, clean variation with an exciting pirouette contest that thrilled the audience. Maslova’s and Thomas’ performances in Act III were mesmerizing and flawless. Maslova’s extensions in her grand jete a la seconde were beautifully extended to unimaginable lengths, and she looked as light as air when Thomas lifted her. Her conveyance of the Black Swan’s sinister intentions was perfect, with an unusually seamless manner of turning to dance towards Thomas and expressing the sad, passionate mannerisms of her earlier Odette characterization, then turning away from him and in looking at the audience for just an instant, changing her facial expression to a slightly recognizable feature of trickery and evil. Michael Korsch’s lighting design drew the audience’s attention to Odette and Siegfried as they danced with a menacing Von Rothbart in an adjoining spotlight. Maslova delivered the intention of the role impeccably and the audience was horrified as Thomas’ Siegfried realizes his fatal mistake.

Act III transitioned to Act IV with the same incredible staging of the shadowed trees in the moonlight of the scrim. Thomas walked across the stage behind the scrim in a moving state of despair, falling to the ground, prostrating himself to the tragedy of his error. The curtain opened back at the lake where Maslova has returned as Odette to share the terrible news with the other swans as lightning crashed over the lake; the special effects were wonderful. There was a mesmerizing formation of swans in two diagonals that joined at the front of the stage. The corps’ arms drifted back and forth together with the sound of an actual harp, and it was again the incredible intrigue of watching a congruous production of dance with music where the audience could not quite tell where one began and the other ended.

There was a beautiful moment right before Thomas ran on stage to find Odette when a nearby child in the audience cried out, “How can you tell the difference?” as all of the swans twirled together and filled the stage in their beautiful movement. The child’s voice seemed to echo as Prince Siegfried ran through the circles of swans, drawing them up from their bowed positions, searching for Odette amongst them. Maslova’s artistry culminated in an incredible moment where her back is turned to the audience and she is simply standing en pointe in fifth position with her arms extended to create the subtle motion of the iconic swan wing arms. While every one of her extensions and her amazing fouette turn series is a feat of impressive ballet skill, it is her capacity to entrance an entire theater simply with the small motion of her arms in this characterization that exemplifies the spirit of Pennsylvania Ballet in its current era. In her embodiment of this passionate character, one felt that Maslova has always held this character close to her heart. 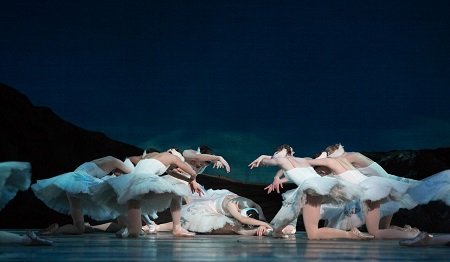 The haunting moment when Siegfried and Odette realize that their only method to reach unity with one another culminated as they each threw themselves through the clearing of the trees into the lake. There were gasps from the audience as a tear was drawn to many viewers’ eyes. As Ihde’s cruel Sorcerer Von Rothbart lies vanquished, the flock of swans turns to face the lake, away from the audience in that quintessential bourree in fifth position with arms extended flying in swan formation with their tutus fluttering like the feathers of a flock of swans.
This afternoon’s performance was truly a masterpiece in artistry, craftsmanship, music, lighting and dance. This return to the classical construct of Swan Lake was a perfect ode to the beauty of the original; one wondered why any company would have ever departed from it in the first place. Though the production was 130 minutes in length, every single member of the audience was in awe and held their breath until the final moments of Siegfried and Odette sailing past the swans in the hereafter. The production received a raucous and lingering standing ovation this afternoon. In a touching moment, the beautiful ballerina white swans were each delivered a single red rose. Those roses were truly a symbol of the love that this company clearly had in creating this masterpiece and the love that thundered through an audience that did not want to say goodbye today.