The city of Philadelphia was aglow with the magic of the holiday season for Pennsylvania Ballet’s The Nutcracker production. Passing the Christmas Village near City Hall bustling with the excitement of shopping and merriment and the festive sounds of ice skaters at Dilworth Park, the audience came into the lobby of the Academy of Music filled with the delights of The Nutcracker. There were life-size gold statues of nutcrackers alongside photo opportunities with sugarplum fairies and mouse kings. The magic of the season enveloped the jubilant attendees before the production even began. Today’s production was truly a feast of holiday delights filled with the magic of the season.

While today’s production honored the intention of George Balanchine’s The Nutcracker there were some special kernels tucked away in the sets, costumes and dancing that were exquisitely delightful gifts for this Philadelphia audience. The viewers’ excitement was palpable as the Orchestra of Pennsylvania Ballet began the first notes of Tchaikovsy’s iconic overture. The sets in Act I were incredible from the opening movements with Clara and Fritz watching the party scene through a keyhole whereby the audience could see the twinkling Christmas tree lights and the sumptuous furniture and accoutrements of the Stahlbaum house.

Sydney Dolan danced the role of Frau Stahlbaum today and was a perfectly attentive mother to Marie and Fritz. Her costume was a gorgeous deep red with beautifully detailed sparkling jewels and Dolan’s posture and carriage were a lovely fit for this role. Olivia DiEmedio danced the role of Marie with a precious charm and Aoife Mary DiPalma was a wonderfully impetuous Fritz. All of the children who danced today were really marvelous and synchronous in each movement of their choreography.

Aaron Anker danced the role of Herr Drosselmeier and was beguiling with his handsome beard and mysterious cloak. The audience delighted in Act I as he tried to say hello to all of the adults at the party as the children tug his cloak and try to distract him incessantly to bring them their gifts. Siobhan Howley and Lucia Erickson danced the roles of Harlequin and Columbine. They were enchanting in their doll-like movements with their large wind-up keys attached to their backs. Federico D’Ortenzi’s jumps and sharp movements were brilliant as the Soldier.

Dayna Hepler’s violin was a special gift today, her impeccable rendition of Tchaikovsky’s score swathed the theater as Dolan’s Frau Stalbaum searched for Marie by candlelight in their home. A highlight of today’s production was the transformation of the Stahlbaum home as Drosselmeier’s magical spell took effect and the tree began to grow and the lights transitioned to different flashing colors in musical coordination. The battle scene between the mice and the soldiers was wonderful with Pau Pujol’s Mouse King waving a quick good-bye to the audience as he falls to his demise with legs quaking outstretched in the air. Adrian Carabe-Peredo’s performance of The Nutcracker was exceptional, and the battle scene was his moment to shine. His coordination and perfect musicality while wearing his large Nutcracker mask was impressive. His small stature relative to the Mouse King was such clever casting and really made the battle scene seem like magical toys had come to life.

The audience trilled with awe as Marie and The Nutcracker arrived in the Land of Snow. This scene was really the stuff holiday dreams are made of. A light snow fell constantly on the stage and there were beautifully painted white trees surrounding the landscape as a moon setting on the backdrop created the sense of looking into a sparkling snow globe. The Artists of Pennsylvania Ballet created a delicate and dynamic flurry on the stage and delivered a truly exquisite rendition of this iconic dance. The sounds of the Philadelphia Boys Choir created an ethereal backdrop for this piece and the audience was transported to a breathtaking place in this moment. 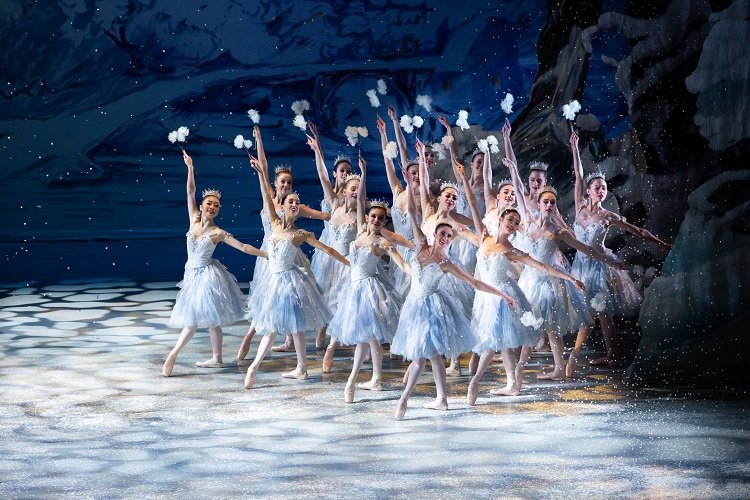 Act II was equally awe-inspiring. The sets for The Land of the Sweets covered every inch of the stage with images of delicious holiday treats like hot chocolate and candy canes. The Angels were simply sublime in their rose gold dresses with elaborate wings and gold crowns, walking gently as if they were floating around the stage. Sydney Dolan and Austin Eyler led the Hot Chocolate with a bright rapture. Cato Berry flew through the air with some of his jumps in today’s Tea dance. Kathryn Manger danced a deliciously sweet Marzipan Shepherdess with a multitude of tiny graceful sautes. Yuka Iseda was a gorgeous Dewdrop and really appeared to be just that, a twinkling light drop of capricious wonder on the petal of her troupe of flowers. Arian Molina Soca was priceless as Mother Ginger, looking at himself in his handheld mirror and drawing a giant heart to thank the audience as he said good-bye with the Polichinelles.

So Jung Shin was an amazing hostess for The Land of Sweets as today’s Sugarplum Fairy. When she danced with the angels, she encapsulated the magic of the Sugarplum Fairy, making all the children in the audience feel as if they would like to walk beside her on tip-toe. Her rendition of the Sugarplum Fairy solo was graceful and lovely, and she was simultaneously humble and exuberant while maintaining an effortless precision and sure-footedness in her extensions and turns. Etienne Diaz was an equal match for her, and his grand jetes around the stage were great fun for everyone to see. 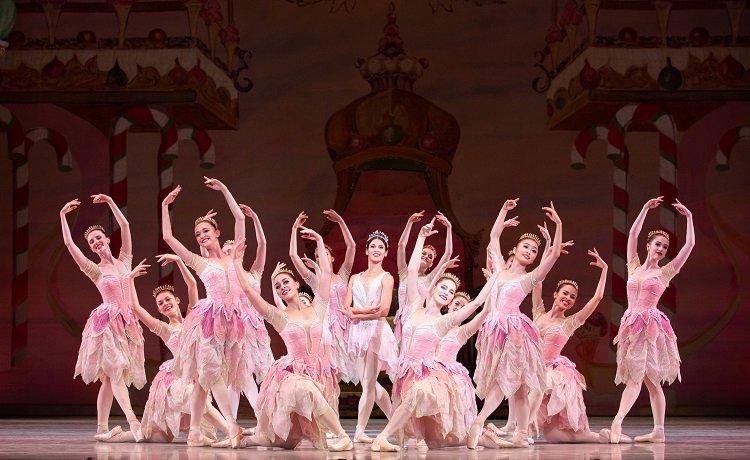 The Nutcracker ended with a stage filled with the talented wonder of all of the dancers of Pennsylvania Ballet, and it was really a celebration of the season and its festive details. Everyone wanted to wave good-bye as DiEmedio’s Princess and Carabe-Peredo’s Prince floated away in their magical sleigh into the night sky. If Pennsylvania Ballet’s The Nutcracker has not been a part of your holiday tradition before, this might be the year to make it so. Visions of sugarplums will likely dance in your head, and what a deliciously lovely dream that would be.