Phoenix was formed in 1981, supported by two schools in Leeds with a strong dance culture and providing a base for talented, young black male dancers. The company evolved over the years, introducing women dancers in 1989 and in 2003 becoming a multi-cultural company with a new name, Phoenix Dance Theatre. It has sometimes seen up and down progress, but with many awards along the way, the company has been on a firm footing for the past few years and now has the talented Dane Hurst as Artistic Director, returning to the company where he was once a dancer. Hurst made a selection of five works from across the 40 years to make a joyous celebration.

The stand out work for me was Harmonica Breakdown (see lead image), created by Jane Dudley. One of the most exciting short solos in the dance canon, it dates from 1938, but could have been made today. To Sonny Terry’s eponymous tune, it embodies the struggle of women and under-privileged groups, a theme as relevant now as then. Dr. S. Ama Wray, who studied with Dudley, taught the work to Yuma Sylla, one of the newest dancers in Phoenix. Sylia was superb, both in the walking sections – a determined woman pressing forward against constraints, and with magnificent jumps and spins. A knock-out piece. 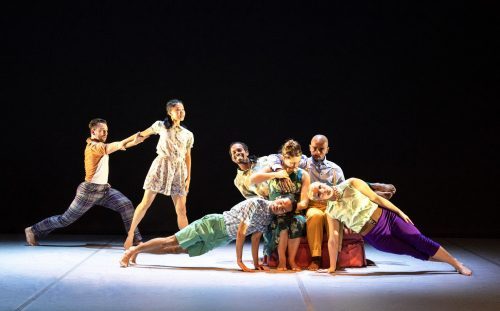 Family by Daniel Shapiro and Joanie Smith dates from 1992, but has also aged well. A family group of seven gather with vibrant, gymnastic moves, jumping, rolling, and spinning around a padded arm chair. The characters are well formulated and humour is never far away. The Father, played convincingly by Aaron Chaplin, has issues with several family members, especially his wife, introducing a darker note into the narrative. In a series of combinations around and over the armchair we see the dynamics of family life play out. I hope Phoenix bring it back again.

Pave up Paradise by Ben Duke and Raquel Mesequer Aze, from 2004 brings the Adam and Eve story into the present with provocative dialogue and interactions both moody and passionate. This early example of Duke’s choreography showed his great promise, now winning awards for his company, Lost Dog.

Heart of Chaos, by Darshan Singh Bhuller, also dates from 2004, but Bhuller has reworked the piece around the story of the first black heavyweight world champion boxer, Jack Johnson, and his confrontations with discrimination both inside and outside the ring. Bhuller has a strong record in socially related works. I remember being moved by his Planted Seeds, about atrocities in the 1990’s Balkans wars. 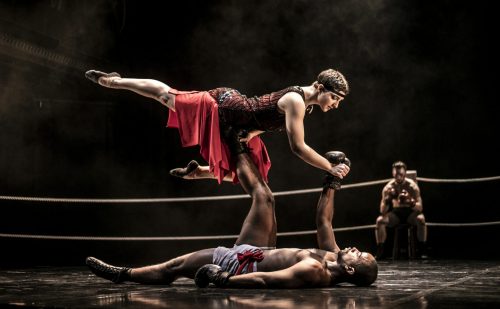 For Heart of Chaos, the action takes place in a two-sided boxing ring and sections corresponding to Johnson’s fights are shown with slow motion punches. In a rehearsal video, Bhuller describes how he insisted that the performers went to a gym to learn how to box and the movement is convincing. We also see Johnson’s relationships with several white women, defying societal norms of the time. Indeed he married a white woman who eventually committed suicide and we see Johnson mistreating her. The choreography is eye-catching and well performed throughout. However, the many strands to the Johnson story are not easily depicted in dance and I sometimes lost the narrative.

The evening opened with Signal by Henri Oguike from 1993. I can remember this work making an impression back in the day with the use of Japanese music including Kodo drumming. The Phoenix dancers attack the physical choreography and Alana Cowie, in particular, brings the movement to life. However, with its unrelenting character, I felt that Signal had not worn as well as the other works in the programme.

Overall, a fine evening of varied dance and I look forward to future anniversaries of this dynamic and innovative company.