Phoenix have had their share of ups and down, but for the past few years under Sharon Watson it’s been up and up. For this visit to London, Phoenix visited The Peacock, a plain but efficient theatre with good sight lines.

The high spot of the programme for me was the revival of Christopher Bruce’s Shadows from 2014. Bruce has been making works addressing human rights issues for over thirty years and Swansong and Ghost Dances are landmark productions inspired by the events in Pinochet’s Chile. The ten minute Shadows sees a family gathered round a table, clearly in distress for reasons that only become clear at the end. Bruce credits Arvo Pärt’s music as evoking, “…a thousand years of human experience and, frequently, suffering.” Leaving the family table, Vanessa Vince-Pang, explodes across the stage to the rapid and strident opening chords of Pärt’s Fratres. The furious nature of her movement establishes a disturbing framework for the work. For the slow, melancholy unfolding of the music we see the Mother and Father weighed down by unknown tragedy. Finally, the son, Carlos Martinez, fights against the injustice of their situation, throwing furniture around in anger, until soothed by his Father. In the final moments, the family put on their coats and pick up small suitcases and slowly move to the front of the stage, leaving the ghetto, Bosnia or perhaps the many other sites of man’s inhumanity to man. I was pleased to read that the intensely moving Shadows is now one of the set works for GCSE Dance. 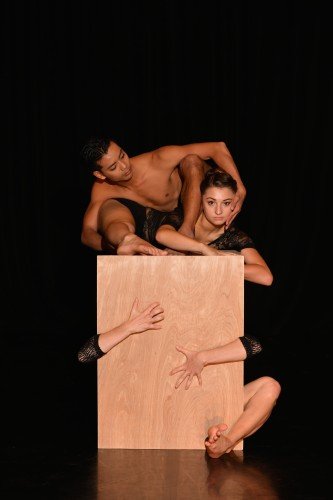 Calyx by company dancer, Sandrine Monin, is remarkably her choreographic debut. Inspired by Baudelaire’s book of poems Flowers of Evil, the work opens showing boxes with fabric panels undulating as the dancers move inside. Body parts appear and eventually one by one, the two couples emerge moving in twisted almost tortured fashion. A duet for the two women in lurid red dresses smokes with passion and a trio for the women and one of the men is always inventive with him sometimes carrying both of them in sensual patterns. I particularly enjoyed Carmen Vazquez-Marfil’s precise and forceful interpretation of Monin’s steps. A choreographer to watch.

Windrush – Movement of the People, is Director Sharon Watson’s homage to her family’s journey to the England in the 1950’s. The work opens in Jamaica with hectic, excited preparations for travel and melancholy goodbyes as a husband leaves his pregnant wife seeking a better life for them all. In England we see the excitement turn to anxiety with the cold unwelcoming conditions. So, how to tackle the racial prejudice experienced by those who responded to the message repeated in the work, “You called and we came”? Watson decided to use humour and we see women in white masks and head scarves pinning racist messages to washing lines with Enoch Powell’s words in the background. But juxtaposed with this we also see a passionate relationship develop between a white woman and a Caribbean man alongside the washing lines. 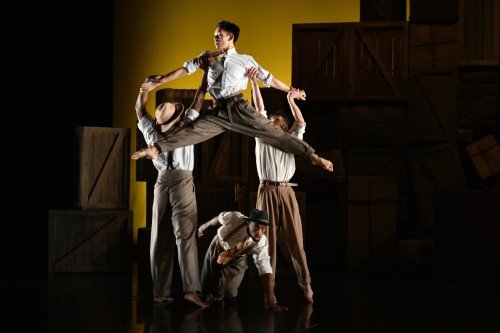 The second half moves to the migrants’ living rooms with a clash of music, Jim Reeves vs rock, drinking parties for the guys and happy interracial relationships, reflecting Watson’s own family experiences, but these scenes lacked a strong connecting thread. While the upbeat ending is positive, the work left me wondering whether the ongoing problems of discrimination had been had been fully reflected. Nevertheless, the 55 minutes of Windrush was rewarding and the audience roared its approval at the end.