Thank goodness the dancers of Pilobolus know how to make people smile. I think the audience members at Wolf Trap were in need of an escape after the tragic and disturbing events in Charlottesville, Virginia, a few days before, and Pilobolus provided it. They did more than make us smile and give us a break from distressing times, though. They presented an entertaining evening of creativity-filled movement in which the dancers worked as a well-oiled ensemble.

Also of note, File Center is an outdoor amphitheater, and Pilobolus selected works that fit well in the natural setting. Three of the works, in fact, incorporated sounds coming directly from nature — running water, bird calls, and the buzz of insects, among others, which blended with the music of actual crickets on this summer night.

First on the program was On the Nature of Things, which was preceded by a short film consisting of a close-up scroll across a landscape of apparently mud-caked bodies of dancers, their eyes staring straight into the camera hovering above them, followed by a welcome message.  On the Nature of Things conjures the story of Adam and Eve’s creation from the Bible. Antoine Banks-Sullivan, who it was announced was giving his final performance with Pilobolus, played the role of what I saw as God. Initially, he carried a man (Nathaniel Buchsbaum) slung over one of his shoulders, and then a woman (Krystal Butler, who began her dance training at the Duke Ellington School of the Arts in Washington, DC). He placed them each on a round pedestal in the center of the stage and, like a sculptor, manipulated their bodies with this hands, posing them. An interesting trio emerged. Banks-Sullivan cradled their heads in his hands, but also with a light touch zapped them or whipped their upper bodies back and forth like supple clay. His creations pleased him, then disappointed him. Butler was banished from the pedestal first. In an absorbing duet, Buchsbaum clung to the waist of Banks-Sullivan, his legs extended outward and floated horizontally. Their bodies intriguingly twisted and shifted weight within the small space on the raised platform. 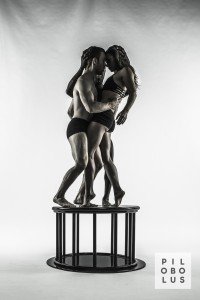 Next came another film, this one featuring footage of UP (the Umbrella Project). Non-dancers carrying neon-lighted umbrellas walked in specific patterns. The camera above them made them look like tiny colorful swirls that circled and bloomed in a dark sea. In a final section, the umbrellas formed a smiley face.

UP was followed by Branches, a new work that premiered in June 2017 at Jacob’s Pillow Dance Festival. One of the things that makes Pilobolus so special is their collaborative choreographic efforts, and Branches is a fine addition to the company’s repertoire. It’s clever and fun, but not a mere morsel. The light-hearted Branches also has depth. Dancers in basically nude unitards (costumes by Liz Prince) became birds, flocking and flying, courting and bathing, comically wobbling and tilting their heads. I loved the costume choice because it engaged the imagination, as did the choreography. One had to use a little imagination to see birds soaring, sleeping, and puffing out their chests, but once used to seeing birds, the effect was pure joy. A few surprises emerged. Dancers shook their heads and hilariously distorted their faces to the sounds of unique bird calls. Jazz music suddenly accompanied a portion of the piece in which the male birds flirted with and pursued the females, in a riotous romp mimicking animal mating rituals.

After intermission was All Is Not Lost, a work I had seen previously in Washington, DC, in the courtyard of the Smithsonian Portrait Gallery. I preferred it in the museum’s more intimate setting, where the audience was very close to the dancers. The fun in All Is Not Lost, besides the catchy pop music of OK Go, is the gimmick of having the dancers slide across a small, clear, elevated stage underneath which is a camera. What the camera sees is projected onto a screen beside the dancers, so one can view the live movement and the video footage simultaneously. It’s amusing watching dancers that appear like they’re smashed on a microscope slide, or they’re splattered on a windshield, or their limbs are part of a kaleidoscope. The change in perspective makes for an enjoyable visual exercise, and the work is kept short, which is critical to its success (the work is the live companion to a Grammy-nominated music video). Critical to its success, too, is the playful mood of the dancers, who poke fun at “selfie” culture. 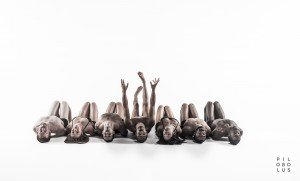 One more film, titled Fresh Guacamole (the shortest-ever Oscar nominated short) by PES (Adam Pesapane), popped up before the final work on the program, and it was my favorite of the offerings on the screen. Recognizable objects are cut by a knife and produce unexpected results. An avocado-shaped grenade is cut in half and inside, in addition to green mush, is a red billiard ball pit. A baseball is sliced, and dice come out. What is ultimately put together is guacamole served with poker chips. Delightfully original!

Finally, there was Rushes, a 2007 work choreographed by Inbal Pinto, Avshalom Pollack, and Robby Barnett, in collaboration with and based on material by Pilobolus dancers. Rushes embraces quirkiness. It’s part circus, part Vaudeville, part Three Stooges, part just plain absurd, and it’s both comic and tragic, all in one. Generally, I cringe when chairs are used as props, and likewise, I cringe when the music of Arvo Part is used. I have nothing against chairs or Arvo Part’s music, other than  extreme overuse  in the dance world. But here, all was forgiven. So charming is Rushes that I was easily won over. There was a wonderful sense of suspense that permeated the work, to the extent that I felt myself leaning forward in my seat, eagerly awaiting whatever was coming. The mysterious hunched man with a suitcase? A sheet was pulled out of it onto which was projected the eclectic stuff of dreams. And all the chairs? Swished and scooted rapidly across the floor, they became a bridge that kept forming and re-forming, a pathway across which two dancers walked. The chairs also, when piled atop one of the dancers, hooked over his limbs, became a laughable costume, heavy to drag across the stage, chairs on his feet like oversized snow shoes. A pair of women were separated, more like torn apart, and it was heartbreaking. The one dragged away was pushed around, and she skated like a magnetic figurine, while the one left behind fell to her knees in despair.

A journey into scaryland: Pilobolus in Shadowland